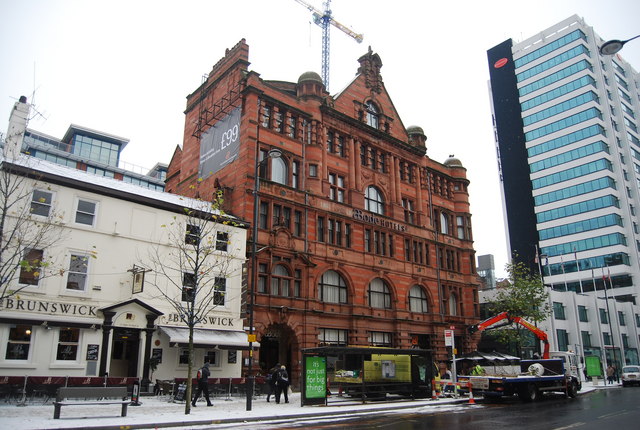 Opened by one of Britain’s most acclaimed chefs, Michael Caines at ABode Manchester is a two Michelin star restaurant located in the Grade II listed ABode Hotel. The restaurant’s elegant design exudes a sophisticated yet relaxed atmosphere, while the kitchen serves innovative European cuisine. It prides itself on using the best local and regional produce, evident in plates such as the roasted Cumbrian lamb rump with lamb sweetbreads, new season onions, peas, wild mushrooms, and tapenade jus, and the Brixham crab salad with avocado, tomato vinaigrette, and tomato consommé. Truly a destination for the tastebuds, Michael Caines at ABode Manchester is one of the city’s most highly praised dining experiences.

Designed by Miguel Cancio Martins of Buddha-Bar Paris, Ken Winch of Buckingham Palace and Firefly of Hakkasan, Vermilion is a destination for all of the senses. The awe-inspiring interior design stretches throughout three stories and is peppered with neo-traditional Asian decorations and artworks. The menu focuses on popular Thai dishes and Asian fusion cuisine, serving plates such as the popular Thai green curry dish Kang keiaw kai, subtitled as ‘the best green curry you can eat beyond Thailand’, and salmon yang, a perfectly grilled Scottish salmon marinated with lemongrass, garlic and coriander paste served with buttered vegetable and lemon butter sauce. The venue is also home to the iconic Cinnabar, an esteemed cocktail bar, and club that serves some of the city’s best alcoholic concoctions and presents out of this world DJ nights.

Gaucho is a restaurant passionate about sharing the essence of Argentine culture with the world. The company has opened restaurants across the globe and its Manchester venue is a prime example of the excellence that each restaurant exudes. From succulent Argentinian steaks and gorgeous interior design to live music and the vibrant open kitchen, the energy of the restaurant has inspired both local and international guests to visit again and again. The wide range of Argentinian wines served here is another point of pride, and its list includes rare and fine bottles. Gaucho donates a proportion of its profits to charities that help disadvantaged people in South America, adding a philanthropic aspect to this fine dining experience.

63 Degree is a high-quality family-run restaurant that aims to bring the taste of Paris to the city of Manchester. Using fresh and local ingredients, the restaurant serves modern French cuisine and places extraordinary care on both flavor and presentation. The restaurant is named after the ideal temperature to serve coffee, while it also references their signature poultry cooking technique and dish, 63˚ slow-cooked stuffed chicken cylinder with potato puree and truffle. Not only a place of flavor, but the restaurant also emanates a sophisticated and intimate ambiance, and their wine menu consists of an extensive list of bottles from all across France.

Much loved by the Mancunian locals, the Aumbry is an intimate restaurant set in a small converted cottage in the suburbs of Manchester. With an aim to provide ‘quality cooking in an informal atmosphere’, the kitchen uses seasonal and local produce to create innovative twists on classic British plates. Some menu highlights include wild rabbit pie with savoy cabbage, chestnuts, salsify and celeriac, and roast Brixham turbot with Lincolnshire crayfish, candy beets, rainbow chard, and Lapsang Souchong, while the restaurant’s desserts feature sweet sensations such as macerated strawberries with candied violet and lemon balm. Juxtaposed with the restaurant’s size, Aumbry’s wine menu is comprehensive and encompasses vintage bottles from all the corners of the world.

As the restaurants' name suggests, Australasia offers a culinary exploration into contemporary Australian cuisine, fusing European traditions with gastronomic influences from Indonesia, Southeast Asia, and Japan. Visitors can enjoy a thrilling mixture of dishes including maki roll sushi with tuna, salmon and pickled mushrooms, Vietnamese pork with vegetable noodles and nouc cham, and redfish curry with sticky jasmine rice. In addition to this delicious range, the restaurant’s interior is absolutely stunning, combining modern design trends with rustic and natural touches, such as the beautiful white tree decorations reminiscent of Australia’s gum trees. An exciting foodie destination, visitors have raved about the restaurant’s glass pyramid entrance on Deansgate.

Widely acclaimed for serving Manchester’s best Italian food, San Carlo Cicchetti’s cuisine centers on the Venetian culinary custom of Cicchetti, similar to Spanish tapas this tradition consists of multiple small dishes that are usually enjoyed with wine or beer. The menu changes every season, offering unique lists such as gastronomic tours through Italy, and the ingredients used are often sourced from the best markets in Milan. On top of this enthralling and flavorsome experience, the restaurant is also immaculately designed, presenting an aesthetic of stunning marble and light summery colors. The restaurant’s pasta is made fresh daily and is used in tantalizing dishes such as the Aspromonte Mountain dish ‘macaroni al ferretto con ragu’ di Capra’, consisting of slow cook goat meat in a rich tomato sauce with handmade pasta

Greens is regarded as Manchester’s flagship vegetarian restaurant, winning multiple awards. The restaurant was created by Simon Connolly and Simon Rimmer, who is now an acclaimed TV celebrity chef, and was founded to be a vegetarian venue with ‘scrumptious dishes and exciting ingredients that aren’t 10 years behind the best restaurants in town’. Now one of the highlights of Manchester’s culinary landscape, the restaurant serves imaginative plates bursting with flavor that are made using fresh local ingredients. Dishes such as crispy crumbled halloumi served on black pudding cake with pea puree, tartar sauce, and potato crumb, and Lancashire cheese and basil sausages with grain mustard mash, beer gravy, and tomato ketchup chutney have satisfied both vegetarians and meat-lovers alike, proving that you don’t need meat for a top-quality meal.

Since its opening in 2004, Albert’s Shed has become a Mancunian favorite for its simple yet clear aim: ‘to deliver quality food to local customers at a reasonable price in a sharp, modern space.’ Achieving these goals expertly, the restaurant exudes a charming atmosphere in its revamped setting of an old tool shed that belonged to the owner’s uncle. The menu is described as ‘unashamedly British’, with UK favorites such as Cheshire lamb rump served with either mint hollandaise or Cornish honey and mustard gravy, and roast loin of venison stuffed with Cropwell Bishop Blue Stilton and wrapped in pancetta with a port and blackberry jus, but it also features international favorites such as curries and Malayan chicken.

Teacup on Thomas Street is a restaurant and cafe that combines two of Britain’s great loves, tea, and cake. Tea is the main focus here and the cafe offers a refreshing and warming list of loose leaf teas, from ‘Moroccan Mint’ to ‘Get Brain Smart Tonic’, while their ever-changing delectable cake options are a constant temptation for regulars. Breakfast, lunch, and dinner can be enjoyed at Teacup, with the restaurant serving quality meals such as irresistible eggs Benedict with York ham, capers, and Meaux mustard hollandaise, and Catalan sausage roll with smoky chorizo sausage and Spanish bean sauce. For those who prefer coffee, the cafe’s baristas boast of expertly pulled shots of Atkinson’s hand-roasted coffee.