Itinerary
Day 1  Arrive in French Canada
Arrive in Montreal, Canada today and settle into your conveniently-located hotel before meeting your Tour Manager at 6:00 p.m. for a welcome dinner. Meal: D
Day 2  Montreal Sightseeing and Notre-Dame Basilica
Embark on a narrated tour of Montreal, one of Canada’s vibrant cities known for its rich French-Canadian heritage. Your local guide shows you Old Montreal with its narrow streets lined with a mixture of buildings dating from the 17th-century, Place d’Armes, St. Joseph’s Oratory, Mount Royal and Olympic Park, site of the 1976 summer Olympics.

Also visit Montreal’s sacred Notre- Dame Basilica, one of the crown jewels of Quebec’s rich religious heritage. Meals: B, D
Day 3  Ride VIA Rail and Quebec Sugar Shack
This morning, Canada’s VIA Rail service takes you to Quebec City. The only walled city in North America, Quebec’s Grande-Allee is alive with many quaint shops and sidewalk cafes. On your touring today, pass under the famed St. Louis Arch which leads into old Quebec. We arrive at the banks of the St. Lawrence River and Place Royale, the oldest settlement in the region. See the majestic Parliament Buildings before arriving at the Plains of Abraham, the site of the famous battle of 1759.

Tonight, a special Sugar Shack dinner will introduce you to Quebec’s unique culture complete with a maple syrup making tour, musical entertainment and traditional French Canadian cuisine. Meals: B, D
Day 4  Basilica-Cathedral Notre-Dame, St. Anne de Beaupre and Montmorency Falls
Begin the day at St. Anne de Beaupre. This beautiful shrine is the oldest pilgrimage site in North America. Continue to Manor Montmorency, once the summer home of the Duke of Kent, for a breathtaking view of Montmorency Falls. Higher than Niagara, Montmorency is Eastern Canada’s highest waterfall. In the heart of Quebec sits Basilica-Cathedral Note-Dame de Quebec, a UNESCO World Heritage Site. Meals: B, D
Day 5  Albert Gilles Copper Art Studio and Our Lady of the Cape Shrine
Learn the intricacies of copper art at the Albert Gilles Copper Art Studio with a tour and hands-on workshop to make your own copper work of art. In TroisRivieres, visit Canada’s National Shrine, Our Lady of the Cape. Built in 1714, it is one of the two oldest churches in Canada. With its magnificent stained-glass windows and unique 5,425-pipe Casvant organ, the shrine welcomes over 250,000 pilgrims a year. Meals: B, D
Day 6  Honey Bees, English Teas and Saint Michel
Begin at Miellerie Lune de Miel Honey Farm where this family-run business produces honey products. Learn its production and taste the sweetness. Then, stop for English High Tea in Quebec’s fashionable Eastern Townships. In Sherbrooke, a local guide conducts a tour of the city’s sites including the immense frescos highlighting the region’s rich heritage and visit the Basilica-Cathedral of Saint Michel, a Gothic masterpiece. Meals: B, D
Day 7  Abbey Saint-Benoit-du-Lac, Mount Orford and Grand Cru Lake Cruise:
This morning visit beautiful Abbey Saint-Benoit-du-Lac, a Benedictine Monastery. Follow in Saint Benedict’s footsteps and learn about daily Monastic life, admire the beautiful architecture and understand how the monks support the needs of the community. Perhaps you will purchase some of the cheeses, cider and fruit compotes made here. On the Mont Orford gondola, be whisked away to the top for breathtaking views of the surrounding autumn foliage. Tonight, the farewell dinner is aboard the Grand Cru vessel which sails on beautiful Lake Memphremagog and serves up a delicious gourmet meal. Meals: B, D
Day 8  Transfer to Montreal and Home:
After breakfast your group transfer takes you to Montreal’s Dorval Airport for flights out after 1:00 p.m. Meal: B 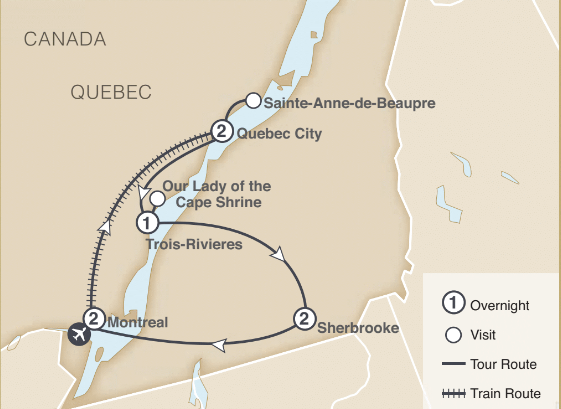 Dates and Rates
Rooms for the night before and after the tour are available. Cost for a room in Halifax is $219, tax included.

Passport & Visas: Each U.S. citizen must have a valid passport.  Expiry date of passports should be at least 6 months after the return date of tour. If you don’t have a passport, call our office and we’ll tell you how to apply for one. Some countries require visas for entry by U.S. citizens. We will send visa applications and instructions if a visa is required for your tour.  Holders of non-U.S. passports should contact their nearest consulate and inquire about the necessary passport or visa documentation required for entry into the countries visited.