11 Days • 25 Meals
Vitality and a zest for life are felt throughout the Mediterranean. Discover your own version of the ‘sweet life’, while traveling from Venice to the Croatian gems of Zadar and Korcula, the island of Sicily to Sorrento, and the French Riviera to the cultural mecca of Barcelona. The very best of the treasures of the Mediterranean are on display as you cruise from Venice to the cultural mecca of Barcelona. Discover picturesque small ports from the island of Korcula to the glorious jewels of the Italian coastline, the Amalfi Coast and Portoferraio on the island of Elba. Explore Cassis on the coast of Provence and along the way uncover the hidden secrets of Dubrovnik and Monte Carlo.

Itinerary
Day 1  Depart the USA
Depart the USA on your overnight flight to Venice, Italy.
Day 2  Venice, Italy
Upon arrival in Venice, you will be overwhelmed by a city of palaces built on a lagoon. You will be transferred to Scenic Eclipse to commence your cruise throughout the Mediterranean.
Day 3  Zadar, Croatia
Zadar is a city monument surrounded by historical ramparts. It’s a treasury of archaeological and monumental riches from ancient and medieval times and the Renaissance and includes many contemporary architectural achievements like the world’s first Sea Organ. Meals: B, L, D
Day 4  Korcula Island
Korcula’s Old Town is a typical medieval-walled Dalmatian town, with its round defensive walls, towers and red-roofed houses. Marco Polo, the famous world-traveller and writer, is rumored to have been born here. Meals: B, L, D
Day 5  Taranto, (Apulia), Italy
The once-mighty Greek-Spartan colony of Taras is, today, a city of two distinct parts – an old historic center on a small artificial island protecting a lagoon (the Mar Piccolo), and a swankier new city with wide avenues. Meals: B, L, D
Day 6  Taormina, (Sicily)
Spectacularly perched on the side of a mountain, Taormina is one of Sicily's most popular summer destinations, a chic resort town popular with those wanting a taste of Sicilian La Dolce Vita. Meals: B, L, D
Day 7  Sorrento, (Pompeii, Amalfi Coast & Capri)
A small resort with a big reputation, Sorrento is a town of lemons, luxury hotels and plunging cliffs that cut through the heart of its historical core. Sorrento is also the gateway to the Amalfi Coast, Pompeii and the island of Capri. Meals: B, L, D
Day 8  Calvi, (Corsica) France
Located on the edge of the Balagne region, Calvi is a small town on the northwest coast of Corsica, idyllically situated with a large sheltered bay to the front and the mountains behind. Pass through the citadel gateway and walk around the ramparts, pausing for numerous photo opportunities as you go. Then venture through the narrow cobbled streets and passages of the citadel to see the old town. Meals: B, L, D
Day 9  Monte Carlo, Monaco
Experience the elegance, glamour and wealth of the Principality of Monaco, featuring the jewel in its crown, Monte Carlo. Meals: B, L, D
Day 10  Saint-Tropez, France
In Saint-Tropez, the heart of the French Riviera, you will find picturesque pastel-colored houses, narrow cobblestone streets, and shady squares add to the city’s charm. Besides the mesmerizing azure blue seas, Saint-Tropez also boasts a verdant countryside typical of the Provence region. Meals: B, L, D
Day 11  Barcelona, Spain
Your cruise ends this morning as you say farewell to your crew. Disembark after breakfast and transfer to the airport for your flight home. Meal: B

Accommodations
Days 2-11  Aboard the Scenic Eclipse 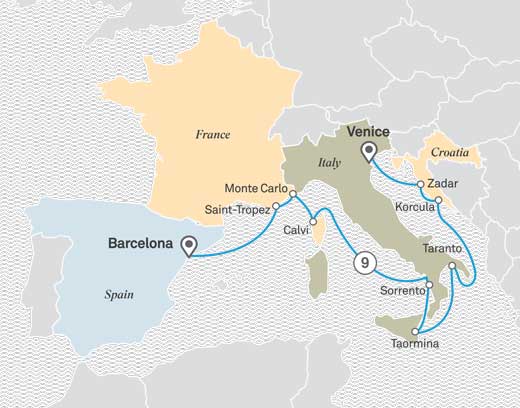 Special Pricing - Call For Details
from $7,795 per person
Travel Resources