9 Days • 23 Meals
Journey along the spine of South America and be amazed at some of the most stunning landscapes in the world. Let us guide you through this captivating coastline of vibrant cities, colonial towns, renowned wine regions and the natural wonders this region has to offer.

Itinerary
Day 1  Lima (Callao), Peru
Welcome to Callao-a seaside city on the Pacific Ocean, and one of Peru's chief seaports-where a world of wonder awaits as you step onboard and raise your glass to toast the start of your luxurious cruise. Meal: D
Day 2  Paracas
Paracas is a town on Peru's west coast. It's known for beaches, like El Chaco, set on sheltered Paracas Bay. The town is a launch point for the uninhabited Ballestas Islands, home to sea lions, pelicans and Humboldt penguins. Rugged, wildlife-rich Paracas National Reserve spans desert, ocean, islands and the Paracas Peninsula. The peninsula’s Paracas Candelabra is a vast prehistoric geoglyph, etched into a hillside. Meals: B, L, D
Day 3  At Sea
Relaxation beckons with so many choices on board you will wonder how time passes so quickly. Choose one of the daily activities including a class in Scenic Epicure, join an entertaining discussion in the Theatre, or make time for your own fitness regime. Meals: B, L, D
Day 4  Matarani
Peru’s port of Matarani is a gateway to one of the country’s most fascinating cities: Arequipa, which sits 7,661 feet above sea level in an Andean valley 75 miles from the Pacific. In the background is the nearby volcano El Misti, which looms over the city at a height of 19,101 feet. Spanish conquistadores founded Arequipa in 1540, but due to its remote location, it developed a distinct identity, known for its outspoken politicians and spicy cuisine. Meals: B, L, D
Day 5  Arica, Chile
Chile’s northernmost city, Arica, is characteristically arid for the region, which is home to the world’s driest desert, the Atacama. The climate and terrain may not seem hospitable for long-term living, but for a visitor just passing through, they’re critical. The attractions include a fascinating archaeological museum that claims to have the world’s oldest mummies, and a village that dates to the pre- Hispanic era and retains some of its mystical allure. There’s also a cathedral featuring a door that came straight from Eiffel’s Parisian workshop and a local wine called Pintatani made from grapes that grow in an unusually fertile part of Arica. Meals: B, L, D
Day 6  Iquique
Iquique is a coastal city in northern Chile, to the west of the Atacama Desert. You may enjoy strolling down Baquedano Street towards the centre of town which will have you thinking you’re in Texas, not a coastal Chilean town. This street’s faded wooden buildings with window shutters and grand doors will also have you expecting to see a cowboy pushing through any of the saloon-like doors. However, the buildings on Baquedano Street are original to the centre of Iquique when the city started to expand during the mining boom of the 1800s. Meals: B, L, D
Day 7  Isla Pan de Azucar
The rugged shores of Isla Pan de Azucar (or Sugarloaf Island) are home to thousands of Humboldt Penguins. The penguins come to this arid island to breed and spend their days fishing, swimming and diving, as do many of the other birds found here. The waters around Isla Pan de Azucar also support Kelp Gulls, Blackish Oystercatchers, Peruvian Boobies, pelicans, sea lions and the reclusive South American marine otter. Meals: B, L, D
Day 8  At Sea
Today the relaxation continues. Try a game of bridge or canasta in the Observatory or tempt your palate with a wine tasting with the Sommelier in Scenic Epicure. Meals: B, L, D
Day 9  Valparaiso > Santiago, Chile
Your cruise ends this morning in Valparaiso as you say farewell to your crew. Disembark after breakfast and transfer to Santiago Airport for your flight homeward arriving in the USA the following day. Meal: B

Accommodations
Days 1-9  Aboard the Scenic Eclipse 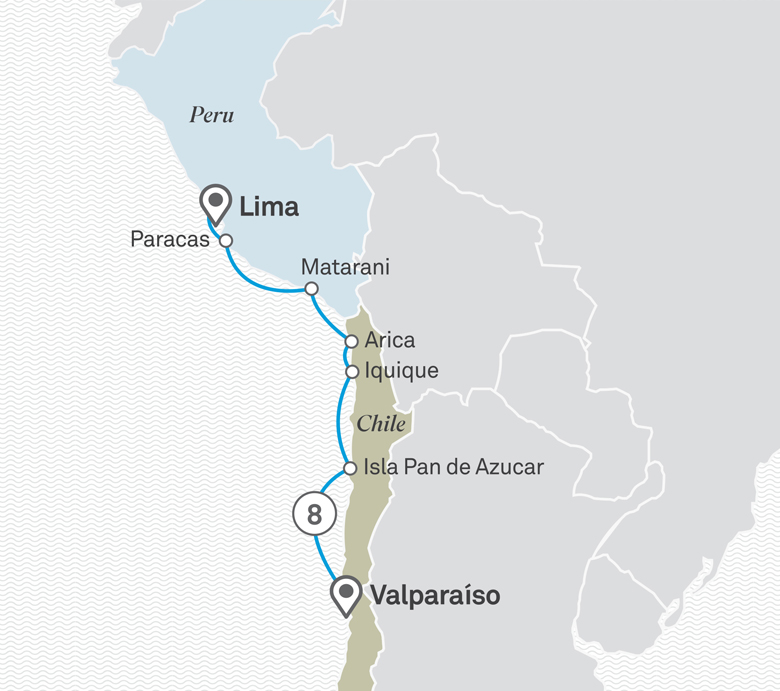 Special Pricing - Call For Details
from $7,495 per person
Travel Resources