Itinerary
Day 1  Puntarenas, Costa Rica
Your luxurious yacht cruise begins in Puntarenas, where you’ll be transferred to your Emerald Cruises luxury yacht and embark on your discovery of Panama and Costa Rica’s West Coast. Please book your flight to arrive into San Jose prior to 01:00 PM.
Day 2  Curú & Isla Tortuga, Costa Rica
The Curú National Wildlife Refuge and farm are situated in Nicoya Peninsula in north-west Costa Rica. Some of the country’s most beautiful beaches and protected bays can be found here. Costa Rica’s first private national wildlife refuge is an example of a successful sustainable development program One can still see the cattle grazing as well as tropical fruits growing like mangos. You also will get to see Isla Tortuga, which is one of the top destinations in Costa Rica, just about an hour away from the shores of Nicoya Peninsula. Isla Tortuga boasts a perfect sandy beach with palm trees and clear waters. You can relax at the beach, enjoy a hike, or go snorkelling in the crystal waters.
Day 3  Quepos, Costa Rica
Quepos is a small, booming harbour town famous for being one of the best places for sport fishing as well as the gateway to the well-known national park Manuel Antonio. As a tropical inlet backed by rainforest, it offers a variety of outdoor adventures. After the fall of the banana plantation that laid the foundations for the port, Quepos replaced its former industry with ecotourism – meaning that there are many other draws, including kayaking and canopy tours. Quepos is also frequented by many scientists and naturalists, who come to study this region's fantastic biodiversity.
Day 4  Golfito, Costa Rica
Golfito Bay is a ‘gulf within a gulf’, known for its unspoiled landscape framed by lush mangroves of Corcovado and Piedras Blancas national parks. It is home to some of the richest biodiversity in the world and is located in one of the most vibrant destinations in Costa Rica, where eco-adventurers, boaters, surfers, and outdoor lovers come to explore and connect with nature through an array of fun and exciting activities. A hidden gem where the Costa Rican jungle meets the sea, Marina Golfito allows you to experience Costa Rica from a stunning new perspective.
Day 5  Isla Cebaco, Panama
Cebaco Island is in the province of Veraguas and is part of the buffer zone of Coiba Island National Park. This is Panama’s third-largest island after Coiba Island and Isla del Rey. There are around 500 people living on the island nowadays, mainly distributed in communities in the north. Isla Cebaco is also known for its beaches.
Day 6  Playa del Muerto - Darién National Park, Panama
The Darién National Park is a UNESCO World Heritage-listed site covering around 5,750 square kilometres. The park is among the largest and most precious protected areas in all of Central America. It covers up almost the entire Panama-Colombia border as well as a stretch to the Pacific. This park offers an exceptional variety of habitats – sandy beaches, rocky coasts, swamps, mangroves, and tropical forests – which makes it the perfect home for diverse wildlife. There are two indigenous tribes, for both Panama and Costa Rica, which live today on the park’s riverbanks.
Day 7  San José Island, Pearl Islands, Panama
Today we venture into Isla San José, one of the privately owned Pearl Islands. It is also the second-largest island in the Las Perlas archipelago. Isla San José is home to a variety of wild animals such as exotic birds, deer, reptiles as well as wild pigs. There are over 50 beaches on Isla San José and this Pearl Island boasts a spectacular rocky shoreline on its north side.
Day 8  Fuerte Amador (Panama City), Panama
Your time aboard your Emerald Cruises luxury yacht comes to an end in Panama City. After bidding farewell to the crew and your fellow guests, you will be transferred to the airport for your return flight home. Please book your flight to depart out of Panama City after 12:00 PM. 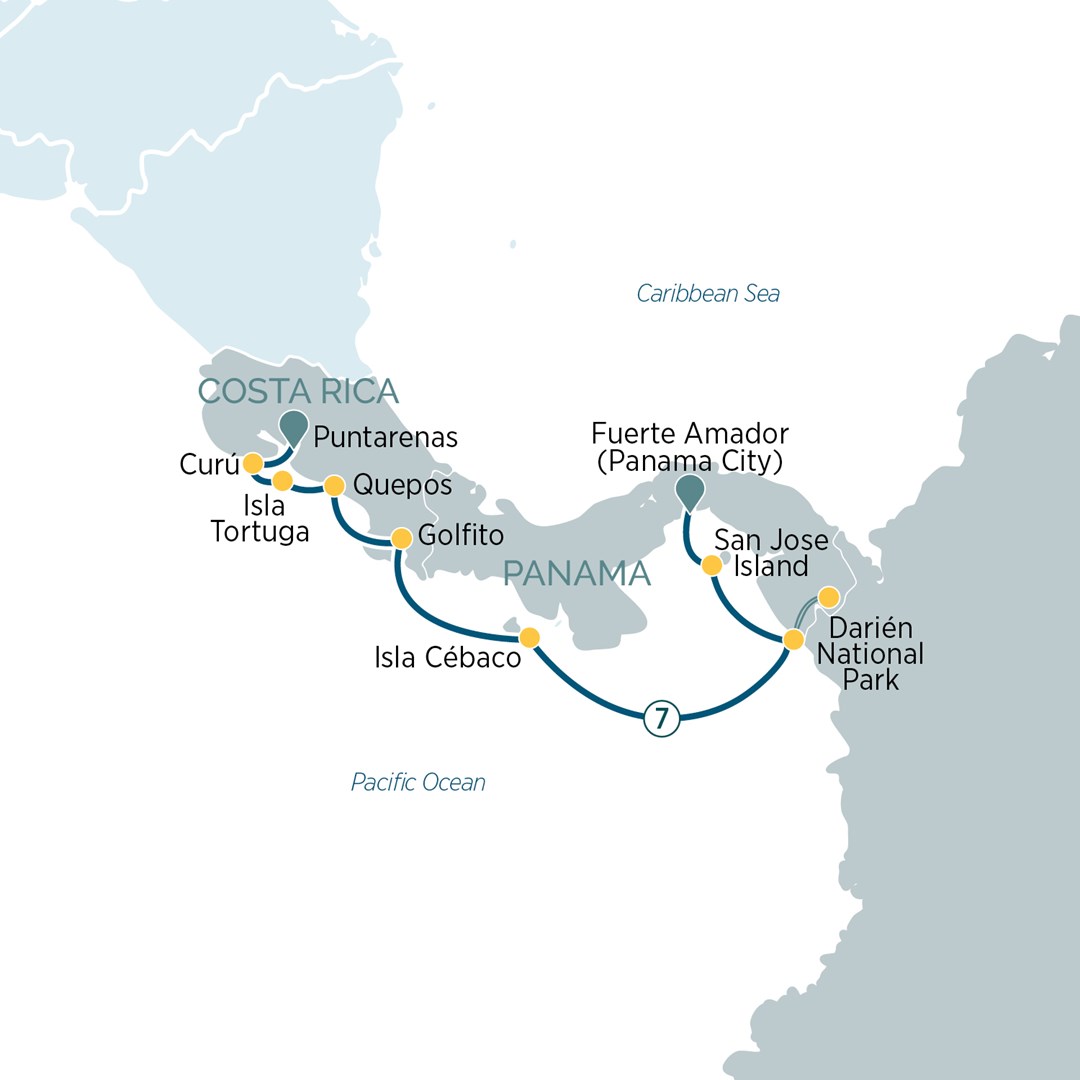