20 Days • 53 Meals
By passing through the Hebrides, Faroe Islands and Iceland before crossing continents to Greenland, Newfoundland and Nova Scotia, this epic journey will trace some of the same points on the compass visited by the Vikings thousands of years ago. Following in their historic footsteps, you’ll encounter for yourself the remote islands, magnificent fjords and icy landscapes that lay in their path. Some of which are still barely visited today. As you move through crisp Arctic waters, be on the lookout for the remarkable wildlife of the region, including whales, seals and seabirds. Yet another fascinating layer to this varied and extraordinary voyage.

Itinerary
Day 1  Depart the USA
Depart the USA on your overnight flight to Dublin, Ireland.
Day 2  Dublin, Ireland
Welcome to the lively Irish capital, Dublin, where your Norse adventure begins. Step on board the magnificent Scenic Eclipse and raise a glass to toast the start of your epic voyage. Meal: D
Day 3  Belfast, Northern Ireland
Today you’ll arrive in Belfast, the capital of Northern Ireland. With its rich cultural heritage you’ll have the day to explore Belfast’s world-class museums and flourishing arts scene. Not to mention the city’s famous maritime history found in the Titanic Quarter, one of the world’s largest urban-waterfront regeneration projects. Meals: B, L, D
Day 4  Stornoway, Hebrides, Scotland
Leave the bustle of the cities behind as you sail for Scotland’s Outer Hebrides to Stornoway. A natural sheltered harbour, the town was named by the Vikings as Steering Bay, later to be translated to Stornoway. On the Isle of Lewis you’ll find medieval castles, Gaelic culture and rugged coastlines that give way to dramatic island landscapes. Meals: B, L, D
Day 5-6  Torshavn, Faroe Islands
Sailing far into the North Atlantic arrive in Torshavn, the capital of the Faroe Islands. One of the world’s smallest capital cities, Torshavn and the Faroe Islands remain one of Europe’s least travelled destinations. Towering cliffs, craggy fjords and powerful waterfalls make up the wild landscape of the Faroe Islands – home to over a million seabirds, including puffins. Meals: B, L, D
Day 7  Seydisfjordur, Iceland
Your first visit port of call in Iceland will be Seydisfjordur. We dock right in the heart of this charming town – settled by wealthy Norwegian fishermen – which is full of brightly colored wooden houses set to a backdrop of spectacular mountains and waterfalls. Meals: B, L, D
Day 8  Heimaey & the Westman Islands
This small and fascinating archipelago was born from volcanic activity and is full of natural beauty. It’s home to vast species of birdlife, including nesting puffins each summer. It’s not uncommon to spot whales and seals in the surrounding waters. Meals: B, L, D
Day 9  Reykjavik
A full day in Reykjavik will give you the opportunity to really explore the quirky Icelandic city, and the world’s northernmost capital. Reykjavik perfectly combines a contemporary art and creative scene with the country’s historic past, full of Norse sagas, folklore and superstition. Meals: B, L, D
Day 10  At sea
Follow in the footsteps of Vikings in crossing continents to Greenland. Meals: B, L, D
Day 11  Prinz Christian Sund, Greenland
Day 11 - Prinz Christian Sund, Greenland: Prins Christian Sund is one of Greenland's most scenic waterways. 65 miles in length, and flanked by magnificent glaciers and granite cliffs, this narrow passage is only accessible during the summer, when the largest ice blockades melt away. Scenic Eclipse brings you close to the glaciers, huge icebergs and imposing peaks for unmissable photo opportunities. Meals: B, L, D
Day 12  Narsarsuaq
Delve into the fjords of Southern Greenland to visit the birthplace of the country. On settling in Narsarsuaq, the Norse Vikings regaled tales of a verdant arctic forest, which led to them naming the country Greenland. This small village on the Tunulliarfik Fjord is surrounded by imposing nature and is the gateway to Southern Greenland. Meals: B, L, D
Day 13  Qaqortoq
Qaqortoq is Southern Greenland’s largest ‘city’, with a population of around 3,000. The colorful wooden houses surround the fjord’s picturesque bay. Learn about Greenlandic culture, with a museum in the town center and Norse settlements and ruins never far away. Meals: B, L, D
Day 14  At Sea
Cruise the Labrador Sea, making the most of Scenic Eclipse’s luxurious features on your way to North America. Meals: B, L, D
Day 15  L'Anse Aux Meadows, Canada
Discovered by Leif Erikson, L’Anse aux Meadows is the only known Norse village in North America. Now a UNESCO World Heritage Site, here you’ll be transported back in time to where Vikings once settled. On the north coast of Newfoundland you can also search for whales and dolphins on your cruise. Meals: B, L, D
Day 16  Gros Morne National Park
Today you’ll be awed by another UNESCO World Heritage site – Gros Morne National Park. Its ancient landscapes were shaped by colliding continents and grinding glaciers, leaving behind an area of stunning natural beauty that’s rich in wildlife. Meals: B, L, D
Day 17  Louisbourg
Opening exclusively for Scenic Eclipse guests, visit the Fortress of Louisbourg after hours. Be welcomed by the military drummers and be regaled with tales of days past by the entertaining guides. You’ll be treated to a concert in the local chapel and have the chance to learn about the rum matured on site, or the French Canadian way to make hot chocolate. Before witnessing the impressive cannon firing ceremony. Meals: B, L, D
Day 18  Halifax
Halifax, the capital of Nova Scotia, is a vibrant and lively city with a historic waterfront precinct. Meals: B, L, D
Day 19  At Sea
Relax on board Scenic Eclipse as you cruise into the Gulf of Maine towards your final destination. Meals: B, L, D
Day 20  Boston, United States of America
Your Arctic to America cruise ends here in New England and the iconic city of Boston. Say farewell to the crew and disembark Scenic Eclipse for your journey home. Meal: B 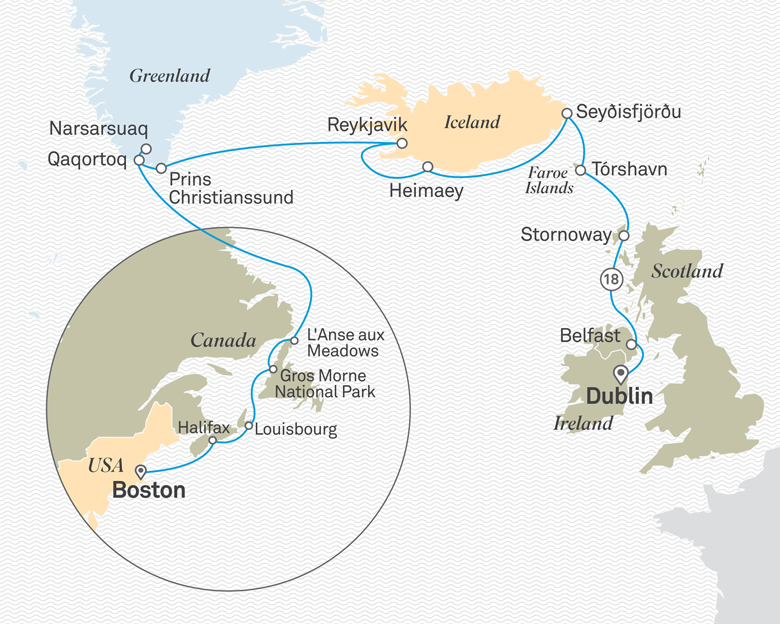 Special Pricing - Call For Details
from $14,895 per person
Travel Resources