A beautifully wild and rugged network of islands and coastlines will unfold before you on this magical voyage through the Scottish Isles. Making your way from Bergen, Norway, you’ll encounter pristine beaches, picturesque harbors and fascinating birdlife as you traverse Scotland’s remote North Isles, Inner and Outer Hebrides – a network of hundreds of craggy islands offering spectacular landscapes. Once through the tranquillity of the archipelago, this diverse adventure will take a livelier turn, as you finish with visits to the Northern Irish and Irish capitals of Belfast and Dublin.

Itinerary
Day 1  Depart the USA
Depart the USA on your overnight flight to Bergen, Norway.
Day 2  Bergen, Norway
Welcome to Bergen, Norway’s magnificent second city, where you’ll be warmly greeted on board Scenic Eclipse. Meal: D
Day 3  Lerwick, Shetlands, United Kingdom
Lying between Norway and the north coastline of Scotland, Lerwick is the Shetland Islands’ capital, and only town. A picturesque harbour town surround by spectacular nature and wildlife, here you’ll learn about the ancient Norse roots of the island with its historic Viking sites, longship replicas and longhouses. Meals: B, L, D
Day 4  Kirkwall, Orkney
Kirkwall is the Orkney Islands’ beating heart, where Viking roots continue to run through its ancient winding streets. Originally called ‘Kirkjuvagur’, meaning ’Church on the Bay’, the Norse cathedral of St Magnus is still a magnificent focal point for the Orkney capital today. A fine example of an ancient Norse town. Meals: B, L, D
Day 5  Stornoway, Hebrides
Sail for Scotland’s Outer Hebrides to Stornoway, on the east coast of the Isle of Lewis and the Isle of Harris (which is actually one island). A natural sheltered harbour, the town was named by the Vikings as Steering Bay, later to be translated to Stornoway. On the Isles of Lewis and Harris you’ll find medieval castles, Gaelic culture and rugged coastlines that give way to dramatic island landscapes and majestic white-sand beaches. Meals: B, L, D
Day 6  Portree, Isle of Skye
The Isle of Skye is a true gem of Scotland’s Islands, and Portree is Skye’s main town and cultural hub; a pretty harbour famous for its brightly painted waterfront houses. Beyond Portree lies an enchanting island full of natural wonders, including distinctive rock formations and the rugged peaks of the Quiraing. Meals: B, L, D
Day 7  Tobermory, Isle of Mull > Fort William
The picture-postcard harbours of Scotland keep coming with a visit to Tobermory on the Isle of Mull. A half day can be spent exploring the town, its sheltered bay and colourful harbour-front buildings, before leaving for Fort William on mainland Scotland. Meals: B, L, D
Day 8  Fort William
On the shores of Loch Linnhe and in the shadow of Ben Nevis, Britain’s highest mountain, Fort William takes up a simply majestic setting. With a full day in the self-proclaimed Outdoor Capital of the UK, your time here will allow you to explore some of the Scottish Highland’s finest scenery, including Glen Nevis – a quite magnificent glacial valley. Meals: B, L, D
Day 9  Iona
It’s back out to island life with a visit to the tranquil Isle of Iona, just off the west coast of Mull. At just three miles long and one mile wild, this small holy island has played a big role in Christianity throughout the ages. And religious history aside, you’ll be quickly won over by the slower place of life of this enchanting isle, as you stroll Iona’s beautiful sandy beaches looking out for its varied wildlife. Meals: B, L, D
Day 10  Douglas, Isle of Man
The capital of the Isle of Man, Douglas, welcomes you to one of the most beautiful areas of Britain. Snaefell is the island’s only mountain and its summit – which can be reached from Douglas on the Snaefell Mountain Railway – offers not only spectacular views, but is also the only place in the UK you can see all of England, Wales, Scotland and Northern Ireland on a clear day. A curious quirk for an island not actually part of the UK. Meals: B, L, D
Day 11  Belfast, Northern Ireland
After the peacefulness of Iona, today you’ll arrive in bustling Belfast – a city transformed. With its rich cultural heritage, you’ll have the day to explore Belfast’s world-class museums and flourishing arts scene. Not to mention the city’s famous maritime history found in the Titanic Quarter, now one of the world’s largest urban-waterfront regeneration projects. Meals: B, L, D
Day 12  Dublin, Ireland
Your cruise ends this morning in the Irish capital of Dublin. Say farewell to the crew and disembark Scenic Eclipse for your journey home and be transferred to the airport for your flight home, arriving the following day. Meal: B 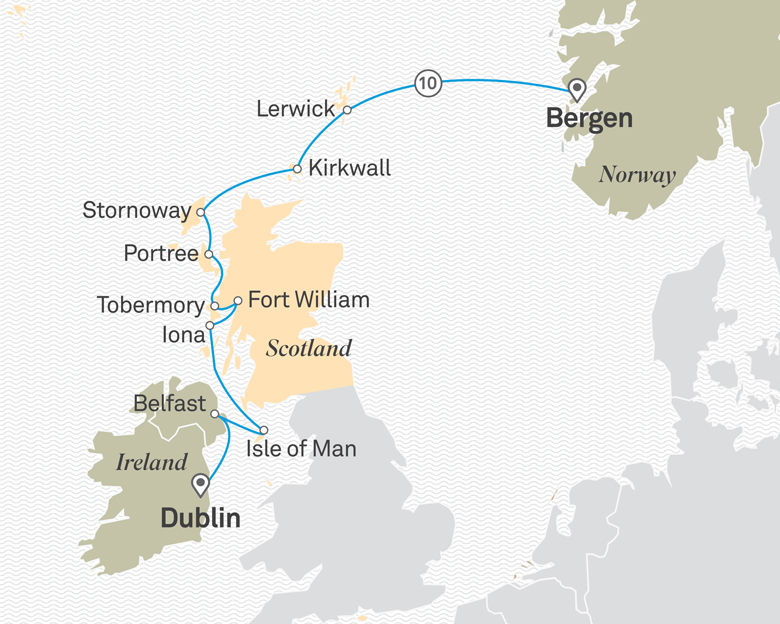 Special Pricing - Call For Details
from $8,795 per person
Travel Resources