10 Days • 23 Meals
Discover small islands and stunning coastlines and uncover hidden secrets on this exceptional itinerary. Let Scenic Eclipse introduce you to the wonders of the Greek Islands and Turkey in true luxury and style. Discover the wonders of Greece and Turkey, unique gems of the Mediterranean. Encounter blue-domed buildings, whitewashed houses, labyrinthine streets bursting with Bougainvillea, guaranteed sunshine, world-class beaches and a fair amount of glamour. There is a reason why the Gods made their homes here. Whatever you want to do, there is no shortage of entertainment.

Itinerary
Day 1  Depart the USA
Depart the USA on your overnight flight to Athens, Greece.
Day 2  Athens (Piraeus) Greece
Upon arrival in the ancient capital of the world, Athens, you will be transferred to Scenic Eclipse to commence your discovery of the Greek Isles. Meal: D
Day 3  Canakkale, Turkey
Although Canakkale is often used as a platform for visiting the nearby battlefields of Gallipoli and the ancient ruins of Troy, this town is well deserving of some attention as it has a lot to offer of its own. With a number of different cultural influences present in the landscape of the town, most noticeably from the Greek, Jewish and Armenian communities, the town is as diverse as it is striking and should be explored in depth. Meals: B, L, D
Day 4  Bozcaada Island
Beautiful Bozcaada is the third largest island in Turkey, famous for its windmills, vineyards, lovely houses, impressive historic monuments from different periods and attractive beaches with crystal clear waters. Meals: B, L, D
Day 5  Kusadasi
Most of Kusadasi's tourist attractions are found in the harbor area. The old town wall’s southern gate still stands here as well. The bazaar area, full of Turkish souvenirs, begins directly in front of the harbor dock. Just off Kusadasi harbor, a 350-meter-long causeway leads out to charming Pigeon Island, where the remnants of a 13th-century Byzantine fortress (which later became a pirates' lair) sit on the cliff. Meals: B, L, D
Day 6  Santorini Island, Greece
As part of the Cyclades islands in the Aegean Sea, Santorini is an island like no other. This volcanic island is home to white-washed buildings and blue domed churches, offering stunning views of the turquoise waters. Meals: B, L, D
Day 7  Amorgos Island, (Katapola)
Located at the south-eastern edge of the Cyclades archipelago, Amorgos is one of the most impressive Aegean islands, boasting marvellous beaches with azure waters, gorgeous caves, ideal spots for diving, scenic bays and ancient footpaths leading through its steep rocky terrain. Meals: B, L, D
Day 8  Paros Island
Serene landscapes, fertile valleys and rolling hills are dotted with small churches and monasteries, and complemented by endless sandy beaches with amazing blue waters. Meals: B, L, D
Day 9  Kea Island, (Cyclades Archipelago)
Due to its proximity to Attica, Kéa (also called “Tzia”) is an easily accessible beauty with diverse scenery including steep mountains, small fields, olive groves, vineyards, valleys, picturesque coves, exciting hiking trails and off-the-beaten-track beaches. Meals: B, L, D
Day 10  Athens (Piraeus)
Your cruise ends this morning as you say farewell to your crew. Disembark after breakfast and transfer to the airport for your flight homeward. Meal: B

Accommodations
Days 2-10  Aboard the Scenic Eclipse 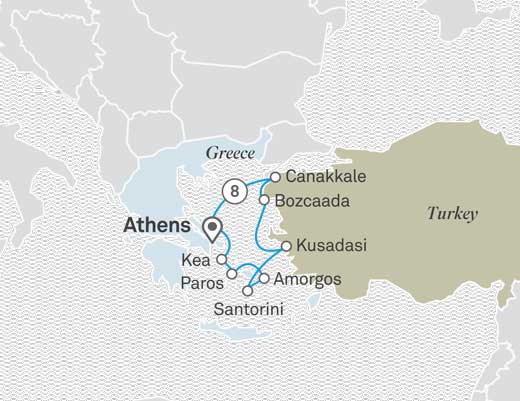 Dates and Rates
Each U.S. citizen must have a valid passport.  Expiry date of passports should be at least 6 months after the return date of tour. If you don’t have a passport, call our office and we’ll tell you how to apply for one. Some countries require visas for entry by U.S. citizens. We will send visa applications and instructions if a visa is required for your tour. Holders of non-U.S. passports should contact their nearest consulate and inquire about the necessary passport or visa documentation required for entry into the countries visited. NOTE: Due to airline security measures, your passport name must match your airline ticket name and your tour reservation name or you may be denied aircraft boarding.

Special Pricing - Call For Details
from $6,395 per person
Travel Resources