12 Days • 28 Meals
Holiday by Air
Join us on the ultimate adventure to America's last frontier, Alaska! Cruise from Seward along the Inside Passage to Vancouver. Visit ports of call steeped in history, culture and tradition. Experience the natural beauty of Denali National Park and travel aboard the Alaska Railroad.

Itinerary
Day 1  Fly to Fairbanks
Your flight to the "Land of the Midnight Sun" takes you to Fairbanks, Alaska, where your Tour Manager greets you at the hotel. The first day of travel will come to a quiet close as you explore the new surroundings and prepare for your adventure.
Day 2  Fairbanks, the “Golden Heart City”
Cast off aboard the Riverboat Discovery, the only authentic sternwheeler in Alaska. Your narrated cruise takes you to Old Chena Village where native Alaskan guides show the culture and lifestyle of the original Alaskans. The afternoon is free to enjoy Alaska’s second largest city at your own pace or you may wish to join you on an optional visit to Gold Dredge #8 Camp for a rail journey through an old mining camp. Here you will be able to try your hand at gold panning in an authentic setting. Dinner this evening is a sumptuous all-you-can-eat feast of grilled salmon, prime rib or deep-fried halibut and cod. Afterwards, enjoy humorous skits and songs about early Fairbanks in the Palace Theatre’s production, Golden Heart Review. Meals: B, D
Day 3  Alaska Railroad and Cabin Nite Dinner
Today, board the Alaska Railroad’s flagship The Denali Star for the trip to Denali National Park. The track cuts through the northern boreal forests of the interior on a journey where sparkling salmon streams, stands of aspen and birch and carpets of purple fireweed create a dramatic landscape. Arriving in Denali, the afternoon is free of scheduled activities to enjoy your scenic surrounding and enjoy an optional "flight-seeing" trip on a helicopter through the park, or a river float trip on the Nenana River. Tonight, sample Alaskan cuisine at Alaska Cabin Nite and enjoy an all-you-can-eat dinner. Then sit back for a hilarious show of tall tales, fun songs and footstompin' music. Meals: B, D
Day 4  Natural History Tour of Denali National Park
Rise early and join an experienced local guide who conducts this morning's Natural History Tour of Denali National Park. Weather permitting, see North America's tallest mountain, Mt. McKinley. Learn about Denali's varied and interesting collection of birdlife as well as the over 650 species of flowering plants. Later, travel down the George Parks Highway where you might catch a glimpse of Mount McKinley and the rest of the Alaska Range through the stands of spruce and pine. A stop at the Iditarod Trail Headquarters showcases the race's exciting history. Tonight, dinner is at the Sourdough Mining Company featuring great food and lively entertainment. Meals: B, L, D
Day 5  Native Heritage Center and Alaska Sealife Center
Today, visit the Alaska Native Heritage Center which features interactive displays and exhibits, Here, you will explore the rich cultural history of Anchorage through guides in traditional dress who perform activities such as basketry, dance, boat making and beadwork in their model lakeside village. Later, drive to Seward and visit the Alaska Sealife Center, the state’s only public aquarium and ocean wildlife rescue center. Later, board your ship, the Norwegian Jewel to begin the unforgettable cruise portion of the tour. Meals: B, D
Day 6  Prince William Sound and Hubbard Glacier
With its 3,000 miles of shoreline, Prince William Sound is one of the most scenic archipelagoes of tidewater glaciers in the world. Keep one eye on the shoreline while cruising, as you just may spot otters, seals, bears, eagles and deer. From almost anywhere on the ship you will be able to view Hubbard Glacier, a massive 1,350- square mile natural wonder of blue ice. It is the longest river of ice in North America and one of the most active glaciers of its kind in Alaska. Meals: B, L, D
Day 7  Icy Strait Point
The Icy Strait Point experience combines authentic regional culture with incredible natural beauty. Located near the city of Hoonah, the largest Tlinglit Indian settlement in Alaska, Icy Strait Point sits next to Glacier Bay National Park. Home to a historic cannery, the port’s connection to the sea is strong as locals share the sea with the many humpback whales, orcas, Dall porpoises and all five species of Pacific salmon that inhabit the region. Meals: B, L, D
Day 8  Juneau and Sawyer Glacier
Your port of call this morning is the Alaskan Capital of Juneau, considered by many to be the most beautiful capital city in the nation. Founded during the gold rush in 1880, the former gold-mining town counts among its riches some of Alaska's most spectacular scenery. The terrain is hilly and winding, and narrow streets present a small-town quaintness existing side-by-side with cosmopolitan sophistication. Meals: B, L, D
Day 9  Skagway and the Lynn Canal
As your ship approaches Skagway, see the town resting peacefully at the base of a river valley bordered by the Coast Mountains. When gold was discovered in the Klondike region of the Yukon Territory, it resulted in the historic Gold Rush of 1898. As thousands of goldcrazed adventurers sought the best jumping-off spot for their trek, they found the deepest penetration by boat was at the northern tip of the Lynn Canal. This is how Skagway was born. Meals: B, L, D
Day 10  Ketchikan
A popular destination along Alaska's famed Inside Passage, Ketchikan is teeming with Native American culture. Known as the "Salmon Capital of the World," it is home to the largest concentration of Tlingit, Haida and Tsimshian people in the state. Meals: B, L, D
Day 11  Cruising the Inside Passage
Cruise the Inside Passage, a 1,000-mile-long sea corridor from British Columbia to Alaska, the longest sheltered inland waterway in the world. Its scenery is as grand as that of Norway. Be on the lookout for orcas and humpback whales as you take in the sheer cliffs, massive glaciers and snow-capped mountains. Meals: B, L, D
Day 12  Vancouver to Seattle and Home
Arrive in Vancouver early this morning and prepare for your motorcoach transfer to the airport in Seattle for flights home departing after 3:00 p.m. Meal: B 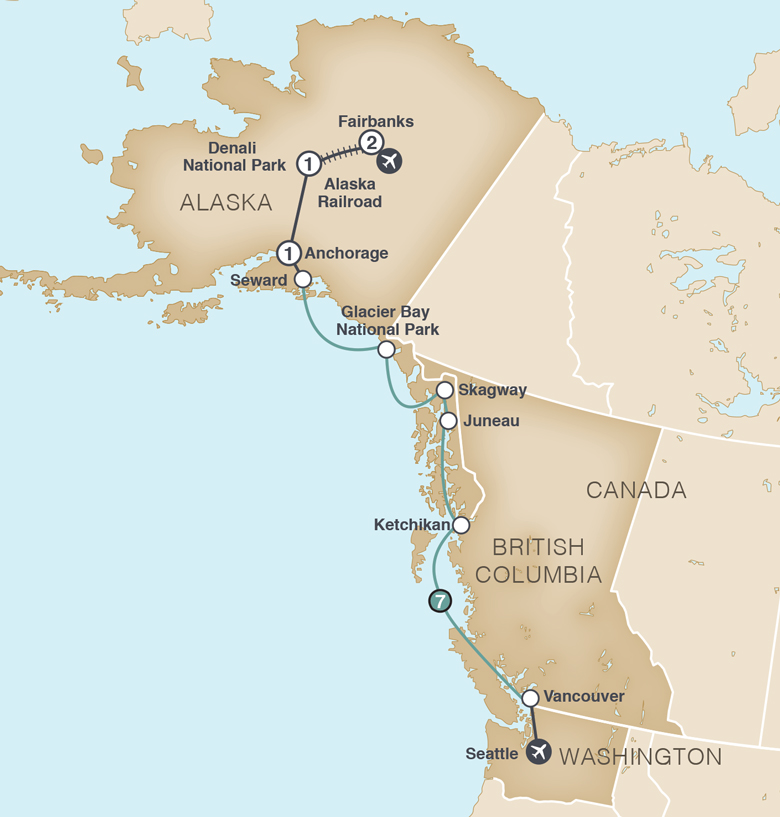 Dates and Rates
Rooms for the night before the tour are available. Cost for a room in Fairbanks is $289, tax included. Each U.S. citizen must have a valid passport. Expiry date of passports should be at least 6 months after the return date of tour. If you don’t have a passport, call our office and we’ll tell you how to apply for one. Some countries require visas for entry by U.S. citizens. We will send visa applications and instructions if a visa is required for your tour. Holders of non-U.S. passports should contact their nearest consulate and inquire about the necessary passport or visa documentation required for entry into the countries visited. NOTE: Due to airline security measures, your passport name must match your airline ticket name and your tour reservation name or you may be denied aircraft boarding.