11 Days • 29 Meals
The hilltop community of Mayreau Island welcomes off-the-beaten-track seclusion, while the boutiques of the Aruban capital, Oranjestad, are wrapped up in beautiful architecture. Colombia has something for everyone, from Cabo de la Vela to Cartagena and, in Panama, you may even meet the natives of the San Blas Islands, before transiting the Panama Canal.

Itinerary
Day 1  Bridgetown, Barbados
Your luxurious yacht cruise begins in Bridgetown, where you’ll be transferred to your Emerald Cruises luxury yacht and embark on your discovery of the Southern Caribbean. Please book your flight to arrive into Bridgetown prior to 03:00 PM.
Day 2  Mayreau Island, Saint Vincent and the Grenadines
Mayreau is the smallest of the Grenadines’ uninhabited islands, with a surface area of only 4 square kilometres (1.5 square miles). The population of Mayreau is no more than 250 people who live in the village on the island’s highest hill, Station Hill”. The charming little church and community centre at the top of the hill provide spectacular views over the islands. On a clear day, one can see both Grenada and St. Vincent, as well as other nearby islands, showcasing the pretty colours of the reefs and waters around the Tobago Cays.
Day 3  At Sea
Enjoy a day at sea, soaking the Caribbean sun while enjoying the stunning views from your luxury yacht and making the most of its various facilities.
Day 4  Oranjestad, Aruba
The capital of Aruba, Oranjestad is a unique blend of old and modern, giving a special charm to the colourful city. It is a bustling harbour city whose streets are dotted with international luxury retailers and diverse boutiques, as well as dazzling residential buildings. Among the remarkable restored buildings is the green ‘Stadhuis’, which houses the City Hall. Another interesting sight is the Aloe Museum and Factory, which dates to 1890 and tells the fascinating story of aloe production, on which the economy was once dependent.
Day 5  Willemstad, Curacao
The lively capital of Curacao Island is a welcoming and energizing travel destination, consisting of two neighborhoods on either side of the beautiful St. Anna Bay. The narrow, well-kept streets of Punda are full of stores and museums. Otrobanda, on the other side of the bay, is a residential area with winding streets, a real maze, contrasting with the right angles of the streets on the other side of the bay. Wilemstad's colorful colonial architecture has earned it a UNESCO World Heritage Site.
Day 6  Cabo de la Vela, Colombia
In the very north of Colombia’s La Guajira region lies the unmissable destination of Cabo de la Vela, considered to be one of the Colombia’s best kept secrets. Here you will find one of the calmest and most paradisiacal beaches located in the widest desert area of Colombia. This privileged location just off the shores of the Caribbean offers some spectacular landscapes showcasing different ecosystems and provides the ideal conditions to enjoy unforgettable experiences.
Day 7  Santa Marta, Colombia
The welcome sign of Santa Marta reads, “Here you can have it all” – and this is truly the case when it comes to the wide variety of activities available in Santa Marta. Alongside its beautiful beaches and vibrant city life, Santa Marta boasts a rich history and culture – it is the oldest remaining city in Colombia, dating back to 1525. Simon Bolivar, the South American liberator, took his dying breath in La Quinta de San Pedro Alejandrino, and until 1842, the Cathedral kept his remains. Today, La Quinta de San Pedro Alejandrino is open as a museum celebrating Bolivar's life and includes a visit to the astonishing nearby gardens which are home to many of Colombia's most beautiful tropical flora.
Day 8  Cartagena, Colombia
Located on the coast of the Caribbean Sea, Cartagena de Indias uniquely combines the charm of colonial architecture and the excitement of vivid modern life. The city is well known for its fascinating cultural festivals, breathtaking landscapes and excellent cuisine. This fabulous city holds secrets of Latin American history within its Old Town walls city and narrow stone walkways. It is among the most well-preserved cities in the Americas and has inspired many artists throughout history, such as the author Gabriel García Márquez, who received the Nobel Prize in Literature in 1982.
Day 9  San Blas Islands – Lemon Cay, Panama
The San Blas archipelago is a group of islands located just north-west of Panama in the Caribbean Sea. There are 378 islands within the archipelago spread around in an area of roughly 100 square miles. Most of the islands are uninhabited, but on a some of the larger ones, one can meet the native people known as the Kunas. Formally called Kuna Yala (‘Land of the Kuna’), San Blas is an autonomous territory of Panama famous for its untouched nature and traditional culture.
Day 10  Fuerte Amador (Panama City), Panama
Today, we are passing through the Panama Canal, the most famous attraction in Panama. Considered as one of the ‘Seven Wonders of the Modern World’, this canal was built to significantly decrease the travel time for ships between the Pacific Ocean and the Caribbean Sea. In its lifetime, the canal has seen over 900,000 vessels and counting, and is seen by many as an engineering miracle which was at first considered impossible to build at first. Today, you’ll experience this marvellous waterway for yourself.
Day 11  Panama City, Panama
Your time aboard your Emerald Cruises luxury yacht comes to an end in Panama City. After bidding farewell to the crew and your fellow guests, you will be transferred to the airport for your return flight home. 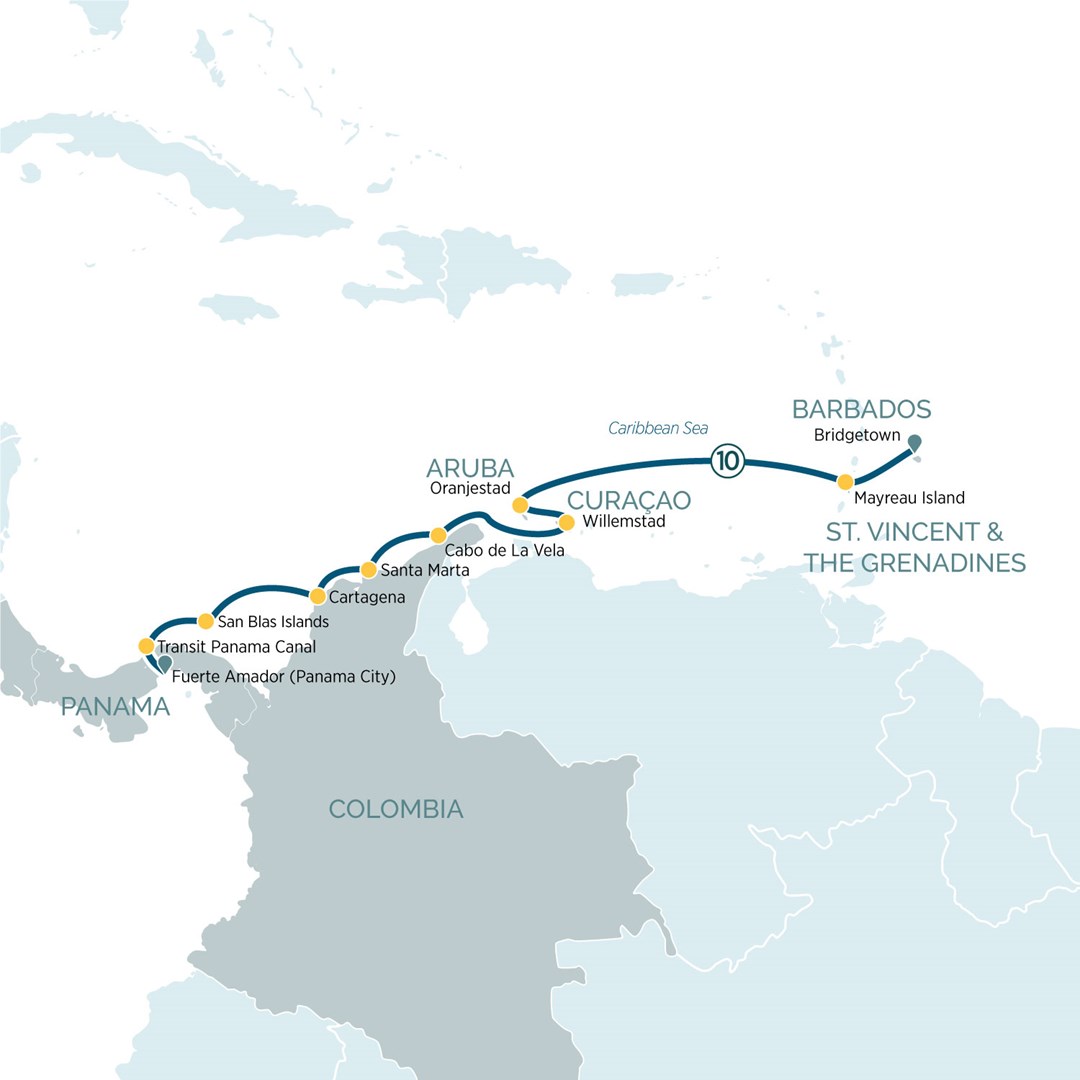