9 Days • 20 Meals
Azure waters abound along the stunning Adriatic coast, where Croatia presents its own distinct form of beauty. From Venice to Krk, Zadar and Šibenik and onward to Hvar, Split, Korčula and Dubrovnik, this unspoilt route through the Adriatic will be yours to uncover.

Itinerary
Day 1  Depart USA
Depart the USA on your overnight flight to Venice, Italy
Day 2  Venice, Italy
Your luxurious yacht cruise begins in Venice, where you’ll transfer to Emerald Azzurra and embark on your discovery of Croatia.
Day 3  Krk, Croatia
Krk is the largest island in the Adriatic, and paints a picture of the early days of Croatia. Krk Town is home to the beautiful 12th-century St Mary’s Cathedral, and a seafront promenade offering scenic vistas over the rolling countryside.
Day 4  Zadar
Set on a peninsula, the historic city of Zadar has relics of bygone eras scattered across its landscape. Among the churches and Roman ruins, the Sun Salutation and Sea Organ are two of the city’s more modern, and curious, attractions.
Day 5  Šibenik
Known for its UNESCO World Heritage-listed St James’ Cathedral and its famous black and orange hat, Šibenik is a city of tradition. The oldest native town in the country, its origins trace back to 1066; you’ll find history at every turn of its medieval streets and Square of the Four Wells.
Day 6  Hvar
Lying neatly off the coast of Split is the island Hvar. Said to be Croatia’s answer to Saint-Tropez, Hvar Town is home to an elegant shoreline bursting with luxurious yachts and is one of the more glamorous settings in the Adriatic.
Day 7  Split
Enjoy a taste of real Dalmatian life in awe-inspiring Split. Croatia’s secondlargest city effortlessly brings together the country’s traditional and contemporary elements. Diocletian’s Palace is an extraordinary example of Roman architecture and features a myriad of hideaway bars and cafés.
Day 8  Korčula
The sixth-largest island in the Adriatic, Korčula is among the most beloved in Croatia. Its Old Town, referred to by the locals as “Little Dubrovnik”, is a delightful collection of medieval churches, palaces and squares, while the villages of Čara and Smokvica produce the country’s signature dry white wine.
Day 9  Dubrovnik, Croatia
As you arrive in Dubrovnik, bid farewell to your crew and fellow passengers as you disembark Emerald Azzurra and are transferred to the airport for your return flight home 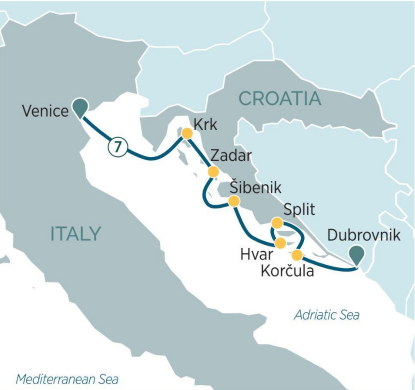 Earlybird Fare - call for details
from $4,660 per person
Travel Resources