16 Days • 41 Meals
From beautiful Croatia to southern Italy and the idyllic French Riviera, visit a plethora of cultural highlights along this stunning route. Bask in the waters of Sicily’s Giardini Naxos, explore the romantic Amalfi Coast, discover the lively marina of Bonifacio and wander the crescentshaped bay of Calvi on the northern tip of Corsica.

Itinerary
Day 1  Depart the USA
Depart the USA on your overnight flight to Dubrovnik, Croatia.
Day 2  Dubrovnik, Croatia
Your Eastern Mediterranean cruise starts in the historic city of Dubrovnik, where you’ll transfer to your superyacht.
Day 3  Monopoli, Italy
On Puglia’s Adriatic coast, Monopoli’s name originates from the Greek meaning ‘unique’ and ‘singular’. The town’s fascinating main attraction is the Baroque cathedral with its bell tower, while café culture spills into the streets and beaches are fewer, but beautiful.
Day 4  Otranto
At the easternmost point of Italy, this still active fishing port sits on the Adriatic Sea looking out towards Greece. A charming town in Italy’s Puglia region, dominated by a 15th-century castle, it is within close proximity to stunning beaches and home to two lakes, the Alìmini Grande and the Alìmini Piccolo.
Day 5  Crotone
Occupying the ‘toe’ of the Italian Peninsula, live like a true Italian among the maze of narrow alleys and squares in this stunning city.
Day 6  Giardini Naxos
This Sicilian town has recently become a seaside resort, home to white sandy beaches and beautiful bays, located at the foot of the sensational hilltop town of Taormina.
Day 7  Amalfi
A scenic town built on the dramatic cliff edges of the Amalfi Coast. Contrasting white buildings seemingly rise from the water’s edge to a promenade stretching along the Mediterranean.
Day 8  Sorrento
Perched atop the rocky cliffs of the Sorrentine Peninsula, the breathtaking beauty of this coastal town promises wonderful restaurants and bars with sweeping views of the azure water below.
Day 9  Porto Ercole Civitavecchia (Rome)
Dating back to the 2nd century, this port town northwest of Rome is home to a number of well-preserved Roman monuments.
Day 10  Porto Ercole
A picturesque coastal town on the southern Tuscan coast, Porto Ercole’s pretty harbor is a fashionable weekend destination for Italians.
Day 11  Bonifacio, Corsica
On the southern tip of Corsica, Bonifacio’s close proximity to Sardinia gives it a certain Italian charm. Dating back to 833, the town is perched atop a limestone platform and home to a bustling marina, overlooked by its medieval clifftop citadel.
Day 12  Calvi
On the northwest coast of Corsica, Calvi is recognized for its beaches and crescent-shaped bay and believed to be the birthplace of Christopher Columbus.
Day 13  Portoferraio, Italy
The capital and main seaport of Elba Island, Portoferraio is one of the oldest towns on the island and considered its capital.
Day 14  Portofino
Along the coastline of the Italian Riviera, the fishing village of Portofino is home to a picturesque square where pastel coloured houses and seafood restaurants spill out onto the yacht-lined harbour.
Day 15  Menton, France
On the French Riviera, Menton is spectacularly situated between Monaco and Italy. Where the Alps rise from the waters of the Mediterranean and its very own microclimate leans towards sub-tropical, a world of lush green beauty thrives with rare plants alongside some truly beautiful monuments to the past.
Day 16  Nice
Today you’ll disembark your superyacht and be transferred to the airport for your return flight home. 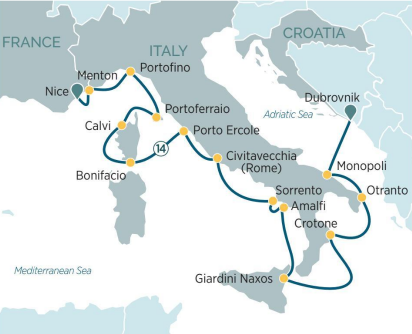 Earlybird Fare - call for details
from $7,345 per person
Travel Resources