16 Days • 41 Meals
Uncover the delights of the Adriatic coast where you will find a wonderful mix of contemporary life and ancient history during visits to Krk, Split, and stunning Dubrovnik. Discover the wonders of Greece, calling at Kérkira with its UNESCO World Heritage-listed Old Town and take in the beauty of Cephalonia, the largest Ionian island.

Itinerary
Day 1  Depart USA
Depart the USA on your overnight flight to Venice, Italy.
Day 2  Venice, Italy
Your luxurious yacht cruise begins in Venice, where you’ll transfer to your superyacht and embark on your discovery of Croatia.
Day 3  Krk, Croatia
Krk is the largest island in the Adriatic, and paints a picture of the early days of Croatia. Krk Town is home to the beautiful 12th century St Mary’s Cathedral, and a seafront promenade offering scenic vistas.
Day 4  Zadar
Zadar has relics of bygone eras scattered across its landscape. Among the churches and Roman ruins, the Sun Salutation and Sea Organ are two of the city’s more modern attractions.
Day 5  Šibenik
Known for its UNESCO World Heritage-listed St James’ Cathedral, Šibenik is a city of tradition. The oldest native town in the country, you’ll find history at every turn of its medieval streets.
Day 6  Hvar
Lying neatly off the coast of Split is the island Hvar is said to be Croatia’s answer to Saint-Tropez. Hvar Town is home to an elegant shoreline lined with luxurious yachts; it is one of the more glamorous settings in the Adriatic.
Day 7  Split
Enjoy a taste of real Dalmatian life in awe-inspiring Split. Croatia’s secondlargest city effortlessly brings together the country’s traditional and contemporary elements. Diocletian’s Palace is an extraordinary example of Roman architecture and features a myriad of hideaway bars and cafes.
Day 8  Korčula
Korčula is one of the most beloved islands in Croatia. Its Old Town, referred to by locals as “Little Dubrovnik”, is a delightful collection of medieval churches and squares, while the villages of Čara and Smokvica produce the country’s signature wine.
Day 9  Dubrovnik
Within the walls of this breathtaking city, you’ll find a UNESCO World Heritage-listed Old Town. Discover Baroque churches, wine bars and picturesque pebble beaches.
Day 10  Kotor, Montenegro
This fortified Montenegrin town on the Adriatic coast showcases a sea of terracotta rooftops among the dramatic cliffs. Dating as far back as the Middle Ages, its UNESCO World Heritage-listed center is truly breathtaking in its exquisite preservation.
Day 11  Sarandë, Albania
Situated on the shores of the Ionian Sea, Sarandë is a horseshoe-shaped resort on the Albanian Riviera. Stroll the length of the beach along its promenade, visit the remains of its 5th-century synagogue and walk to the hilltop Lekuresi Castle.
Day 12  Kérkira (Corfu), Greece
One of the most popular Greek Islands, Corfu, or Kérkira, is influenced by its rich cultural heritage.
Day 13  Párga
Relax in the island-like ambience of Párga. Marvel at the paradise-like beaches from the elevated mountain slopes.
Day 14  Cephalonia Island
Cephalonia is the largest of the Ionian Islands, and arguably the most beautiful. The island was also made famous when it featured in the Hollywood movie ‘Captain Corelli’s Mandolin’.
Day 15  Itea (Delphi) & Corinth Canal
Explore the archaeological site of Delphi before navigating the Corinth Canal.
Day 16  Athens (Piraeus)
Today you will disembark your superyacht and be transferred to the airport for your flight home. 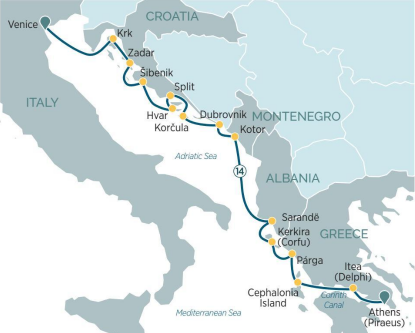 Earlybird Fare - call for details
from $8,290 per person
Travel Resources