9 Days • 20 Meals
Sail the azure waters of the southeastern Aegean Sea, from Kuşadasi to Bodrum in Turkey, and onward to explore a number of the stunning Greek islands including Rhodes, Amorgos and Mykonos.

Itinerary
Day 1  Depart the USA
Depart the USA on your overnight flight to Athens, Greece.
Day 2  Athens (Piraeus), Greece
Upon your arrival in Athens, you’ll board your spectacular super yacht, Emerald Azzurra, to commence your yacht cruise. The Greek capital, Athens, was the heart of Ancient Greece, the remnants of which have been beautifully preserved, namely the Acropolis.
Day 3  Patmos
In the north of Greece’s Dodecanese Islands, the Aegean island of Patmos is known for being sacred as the place where Saint John wrote the Book of Revelation. A wonderful stop for those inspired by nature, architecture, history or, simply, sun-worshippers.
Day 4  Kuşadasi, Turkey
This beach resort town on Turkey’s west coast dates back to 3000 BC and is now a busy cruise port, with a renowned nightlife. Home to a small Byzantine castle, the Grand Bazaar selling the wares of numerous merchants, and much in the way of monuments to the past.
Day 5  Bodrum
Reaching from Turkey’s southwest coast into the Aegean Sea, the stunning twin bays of Bodrum are home to one of the Seven Wonders of the World, the Mausoleum at Halicarnassus, built between 350 and 353 BC for Mausolus. While being historic, the city is a playground for Turkish and foreign visitors alike, with two contrasting sides, east and west.
Day 6  Rhodes, Greece
The capital of the Dodecanese Islands, Rhodes seemingly has it all. Lush green valleys, golden beaches and archaeological sites. Known as the Island of the Knights, the medieval city is a UNESCO World Heritage site.
Day 7  Amorgos
The furthest eastern island of the Cyclades group, Amorgos is a secret, untouched hideaway where unique natural landscapes are dotted with Cycladic architecture, beautiful beaches welcome relaxation and hiking trails awaken the adventurer in you.
Day 8  Mykonos
Named after Apollo’s grandson, this cosmopolitan Greek island in the heart of the Cyclades is built on myth and legend. Clear blue skies, renowned beaches and whitewash windmills make it the perfect port stop.
Day 9  Athens (Piraeus)
Today you’ll disembark Emerald Azzurra and be transferred to the airport for your return flight home. 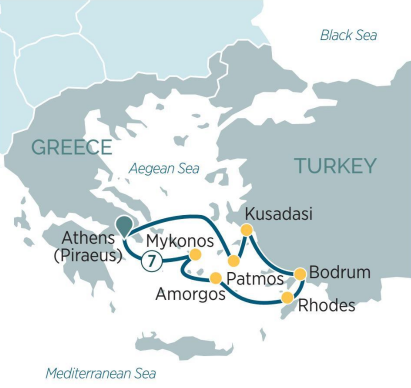 Earlybird Fare - call for details
from $4,590 per person
Travel Resources