800.323.7604 or contact your local travel professional
Login Sign Up
Virginia International Tattoo
Featuring Three Nights in Virginia Beach
Highlights
Itinerary
Accommodations
Map
Dates/Rates
Photos
7 Days • 10 Meals
Holiday by Motorcoach
See modern and vintage war machines in pristine working condition, and attend events celebrating America's military might by air and sea. Whether you're a veteran or a military buff, this tour is sure to delight.

Itinerary
Day 1  Depart for Ohio
Travel to the Youngstown, Ohio area for the first overnight and a welcome dinner hosted by your Tour Manager. (Dinner)
Day 2  Arrive in Virginia
Continue east toward the Atlantic coast and arrive in Fredericksburg, Virginia, for an overnight stay. (Breakfast)
Day 3  Military Aviation Museum and Virginia Beach
Arrive in Virginia Beach, the state’s largest city which boasts the world’s longest boardwalk flanking miles of pristine, sandy beaches. Apart from the waterfront, the region has much more to offer. Pay a visit to the Military Aviation Museum, home to one of the world’s largest private collection of vintage WWI and WWII military aircraft. Each have been beautifully restored to their original condition and many are still flown during flight demonstrations. (Breakfast)
Day 4  Norfolk Naval Station and the Virginia International Tattoo
Begin the day with a tour of the Norfolk Naval Station. This 45-minute tour is conducted by Naval personnel and gives you the opportunity to see the many aircraft carriers, destroyers, frigates and amphibious assault ships housed here. Be sure to have your photo ID handy. The General Douglas MacArthur Memorial tells the story of the man and also pays tribute to the many men and women who served with him. After an included dinner downtown, attend the “Hullabaloo,” a pre-Tattoo event with tasty foods, craft beers, music, dance and drill performances, photo-ops and an audience judged piping competition. Tonight, you have reserved seats to the Virginia International Tattoo. This awe-inspiring musical spectacle is part parade, part theatre and sometimes, part circus. It is highly regarded as one of the world’s great tattoos. (Breakfast and dinner)
Day 5  Nauticus National Maritime Center and NATO Parade of Nations
Begin the day at Nauticus National Maritime Center, a premier maritime science museum to learn about undersea life and ocean exploration. You can also take a self-guided tour of the battleship Wisconsin, the largest and last battleship built by the U.S. Navy. Walk the huge, expansive main deck and explore the second deck to see the berthing units, post office and dental office. Just steps away from Nauticus are our reserved seats for the Norfolk NATO Parade of Nations. This annual event features high school bands, U.S. and international military bands and colorful floats which represent each of the 28 NATO Member nations. At the Norfolk Botanical Garden we climb aboard the tram for a narrated tour of Coastal Virginia’s premier horticultural attraction. (Breakfast and dinner)
Day 6  Depart for Pennsylvania
Bid farewell to the Atlantic coast today and venture west to the Keystone State of Pennsylvania. Your Tour Manager will host a farewell dinner for you and your new-found friends. (Breakfast and dinner)
Day 7  Arrive Home
Arrive home today with memories of your Virginia International Tattoo adventure. (Breakfast) 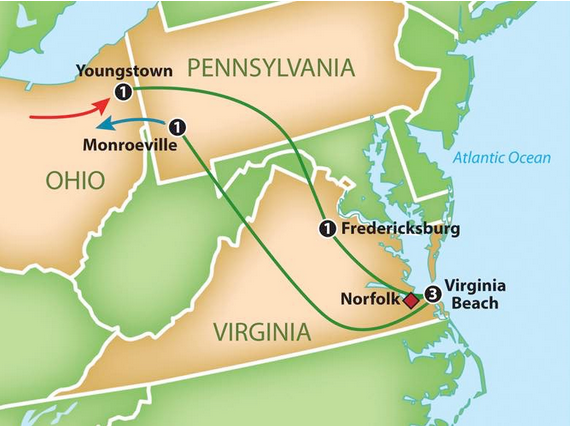