South Carolina’s historic Sea Islands is a perfect jumping off point to visit the “Belles of the South.” Charleston, regarded one of the most beautiful cities in America; Savannah, the city General Sherman considered “too beautiful to burn” during the Civil War; and Beaufort, whose downtown is on the National Trust for Historic Preservation.

Itinerary
Day 1 & 2  Depart for The Sea Islands
Begin your journey to the coast with a welcome dinner and overnight in Tennessee before coming to South Carolina. Meals: D, B
Day 3  Charleston and Boone Hall Plantation
Travel to Charleston, widely regarded as one of the most beautiful and historic cities in America, Charleston’s delightful southern breezes and cobblestone streets pave the way to gracious living and warm hospitality. Through the stories of those who founded Charleston, the local guide makes history come alive along these antebellum home-lined streets. See the Old Market and Exchange and the famous “Battery at the Harbor,” which overlooks Fort Sumter.

After lunch on your own, visit Boone Hall Plantation and Gardens, one of America’s oldest working, living plantations, which has been continuously growing and producing crops for over 320 years. Visit the plantation home, stroll the historic gardens and envision plantation life at the turn of the century. Meals: B, D
Day 4  Explore Beaufort and The Sea Islands
This morning visit Penn Center Museum on St. Helena Island. Rich in Gullah history, learn the importance of the Gullah people who settled the area. Then cross to Hunting Island and visit Hunting Island State Park, South Carolina’s most-visited state park. It features miles of clean beach along the Atlantic and an historic lighthouse, which was built in 1873.

In the afternoon, board a horse drawn carriage for a narrated tour of Beaufort. Located on Port Royal Island, one of the largest Sea Islands, Beaufort is one of only a handful of towns in the nation that has had its entire downtown designated an historic district by the National Trust for Historic Preservation. Occupied by Union troops during the Civil War, Beaufort is filled with more than 50 historic structures, many of which are lovely private antebellum homes which have been beautifully restored.

Later, take to the water for a narrated cruise along the scenic Beaufort River. Learn about the history and ecology of the area and watch for the abundant wildlife like the playful dolphins, which seem to guide our way. Meal: B
Day 5  Trolley Tour of Savannah
Visit Savannah, Georgia today, the city that General William T. Sherman deemed “too beautiful to burn” at the end of his historic “March to the Sea” during the later stages of the Civil War. Here, climb aboard a trolley for a narrated tour of this picturesque city.

Learn of Savannah’s intriguing history and be captivated by her natural beauty and eccentric charm. Return to Beaufort and embark on an educational tour of the Kazoobie Kazoo Factory and Museum. Learn the history of the kazoo and even make your own kazoo to take home. Meals: B, D
Day 6  Travel to Pigeon Forge
Depart South Carolina’s beautiful Atlantic coast and travel into Tennessee to the Smoky Mountain entertainment capital of Pigeon Forge. Meal: B
Day 7  Great Smoky Mountains National Park and Hatfield & McCoy Dinner Show
This morning take in the breathtaking beauty of the Smoky Mountains. The Great Smoky Mountains National Park preserves the rich cultural tapestry of Southern Appalachian history. The park strives to protect the historic structures including of one of the best collections of log buildings in the eastern U.S., along with the landscapes and artifacts that tell the varied stories of people who once called these mountains home.

Then, it’s off to Gatlinburg to experience the history, beauty and nostalgia of the small town nestled in the Smoky Mountains. There are many galleries, unique craft shops and restaurants throughout the town as well as the Ole Smoky Moonshine Distillery. For generations Tennessee moonshiners have been making their product in the backwoods, but now Ole Smoky brings this unique whiskey into the light. Stop in to see the distilling process and try a sip in the tasting room.

Tonight is an evening of great food and fun Tennessee entertainment at the Hatfield & McCoy Dinner Show. Arrive just in time for a big barn dance to find that someone invited both the Hatfields and the McCoys! Since these folks are not the best of friends, see how the newly elected sheriff handles the situation. Meals: B, D
Day 8  Journey Home
Travel home today with warm memories of South Carolina’s Sea Islands. Meal: B 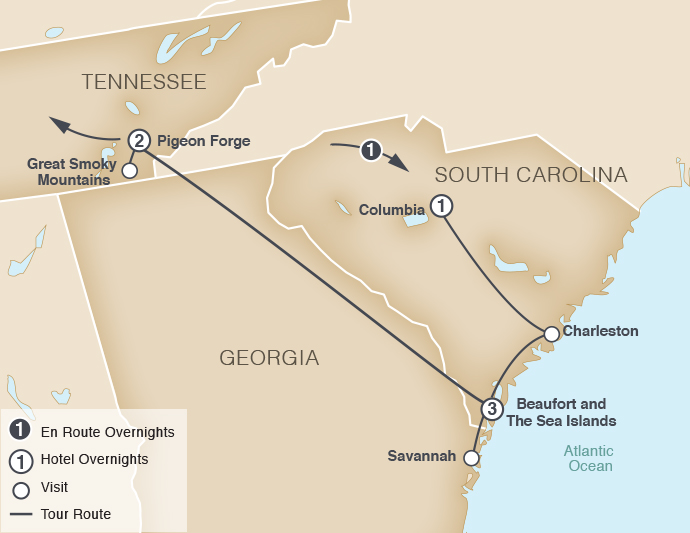