From Gdansk’s “Royal Way” to the longest pier in Europe; from the vibrant, historic capital of Warsaw to Kraków’s charming Old Town with its Market Square and 16th-century Cloth Hall, you’ll see it all on this Mayflower holiday. Visit historic castles, beautiful cathedrals and sites of great religious significance. And journey to Auschwitz and the Kazimierz Jewish District to gain insight into a painful period in Polish History. You’ll truly experience the Pride of Poland during this 9-day adventure.

Itinerary
Day 1  Depart the USA
Depart the USA on your overnight flight to Gdansk, Poland.
Day 2  Gdansk, Poland
Upon arrival, you’ll be met by a Mayflower Cruises & Tours representative and transferred to your hotel. The remainder of the day is free for you to relax or explore on your own. Tonight, join your Tour Manager and fellow travelers for dinner. Meal: D
Day 3  Gdansk – Gdynia – Sopot
After breakfast, participate in a sightseeing tour of Gdansk, during which you’ll learn more about Lech Walesa – the Solidarity activist and winner of the Nobel Peace Prize. Walk along the “Royal Way”, taking in major sights like the 17th-century Golden Gate, the Neptune Fountain situated in front of the Artus Court, and the City Hall, which dates back to the 14th and 15th centuries. One of the most interesting buildings in Old Gdansk is the largest Gothic church in Poland, St. Mary’s Church, and the City Hall Tower offers spectacular views of the city.

Later travel to Sopot and walk along the longest pier in Europe! Make sure to stop for a coffee in one of the town’s many cafés. Your journey continues to Gdynia, whose harbor is home to many ships open to the public. The destroyer Blyskawica is a national treasure and the only remaining ship built before World War II. And the Dar Pomorza is a Polish sailing frigate that is now preserved as a museum ship in Gdynia. Return to the hotel in Gdansk after a day of exploration. Meal: B
Day 4  Gdansk – Malbork - Warsaw
The day begins as you travel to Malbork to visit the Castle of the Teutonic Order of Knights, a mighty Polish Gothic fortress built in the 13th and 14th centuries and a UNESCO World Heritage Site. An outstanding example of medieval defensive and residential architecture, the 51-acre area consists of three castles surrounded by separate fortifications. After exploration of the castle, continue on to Warsaw, the largest city in Poland. Dinner is included this evening. Meals: B, D
Day 5  Warsaw
Steeped in history, Warsaw is one of the most strategic cities in Europe. Discover this capital city on an included full-day sightseeing excursion. As you stroll along the Royal Way, linking the Royal Castle with Wilanów Palace, view some of the most beautiful sites in the Old Town and quaint Market Square. Pass St. John’s Cathedral and visit the Royal Castle, faithfully restored to its pre-World War II splendor and retaining many of its original furnishings. Formerly the official residence of Poland’s kings and home of the Polish Parliament, it now houses the Castle Museum. Lakes, pavilions, mansions, an Observatory, the Orangery, formal manicured gardens, a multitude of palaces, including the stunning Lazienki Palace on the Island, and a classic-style amphitheater all await your discovery during the visit to Lazienki Park. The statue of Frederic Chopin, built to honor Warsaw’s favorite son, is another highlight in the park. It’s easy to see why this is one of the most beautiful parks in the heart of the city!

Wilanów Palace, a wonderful Baroque residence and former summer home of King Jan III Sobieski, is one of the country’s greatest national treasures. After a full day of touring, the evening is yours to experience Warsaw on your own. Meal: B
Day 6  Kraków and Częstochowa
After breakfast, depart for the charming town of Kraków for a threenight stay. Along the way, lunch is included at a local restaurant. After lunch, stop at the famed Monastery of Jasna Góra in Częstochowa – the third largest Catholic pilgrimage site in the world and the national shrine of Poland. The miraculous icon of Our Lady of Częstochowa is housed in the Chapel of the Black Madonna. For centuries, the Polish people have believed that this reverent painting holds supernatural powers. After checking into your hotel in Kraków, the evening is free to enjoy dinner on your own. Meals: B, L
Day 7  Kraków
Kraków is known for many things throughout history, including being a former capital of Poland, the home of the late Pope John Paul II and the only major city in Poland to remain unscathed by World War II. This thousand-year-old city retains its beauty and charm and is proud of its Old Town which was included on UNESCO’s first list of World Heritage Sites in 1978. The highlight of the Old Town is Market Square, the largest in Europe, and the 16th-century Gothic ‘Cloth Hall’ - the world’s oldest “shopping mall.” Discover the city as you meander among the cobblestone lanes on the included walking tour. See the imposing Wawel Castle, coronation site of Polish monarchs, perched atop a hill overlooking the Vistula River, St. Mary’s Church and the Jagiellonian University.

At exactly noon you’ll hear the Kraków Hejnal (bugle call) played by the fireman trumpeter, who can be seen in a window of the highest tower of St. Mary’s Church. As you visit Wawel Cathedral, get up close to the Sigismund Bell, the largest bell in Poland and enjoy a wonderful view of the Old Town from the tower. This afternoon enjoy an included visit to the Wieliczka Salt Mine, another UNESCO World Heritage Site and one of the most famous attractions near Kraków. Walk through 20 chambers on three underground levels to explore the amazing grottoes of crystalline carvings, the subterranean lake with stunning colors and the Chapel of St. Kinga, an impressive ‘cathedral’ with every feature carved out of solid salt. Meal: B
Day 8  Kazimierz and Auschwitz
Today’s journey takes you to the Auschwitz-Birkenau Concentration Camp Museum of Martyrdom which provides one of the most memorable lessons in modern European history. Between 1940 and 1945 more than one million prisoners perished in the gas chambers of this Nazi concentration camp. In 1947, the Polish government preserved these grounds as a State Museum and in 1979 it also became a UNESCO World Heritage Site, symbolizing the horrors of the Holocaust.

The visit includes a film showing the camp’s liberation, the flower-strewn Death Wall, national memorials, the railway line and the remains of hundreds of barracks, all of which constitute a moving testimony to the number of lives lost. This afternoon, visit the Kazimierz District which showcases the historic center of Jewish culture since the 16th-century. The main attractions of the district are Szeroka Street (where Schindler’s List was filmed); Isaac, High and Old Synagogues; Remu’h Synagogue and its cemetery and the ‘Pod Orlem’ (Eagle) Pharmacy. This evening, join your fellow travelers for a farewell dinner. Meals: B, D
Day 9  Kraków / USA
This morning, transfer to Kraków Airport for your flight home. All too soon your adventure comes to an end but you’ll bring back memories of Poland’s history, charm and beauty to last a lifetime. Meal: B 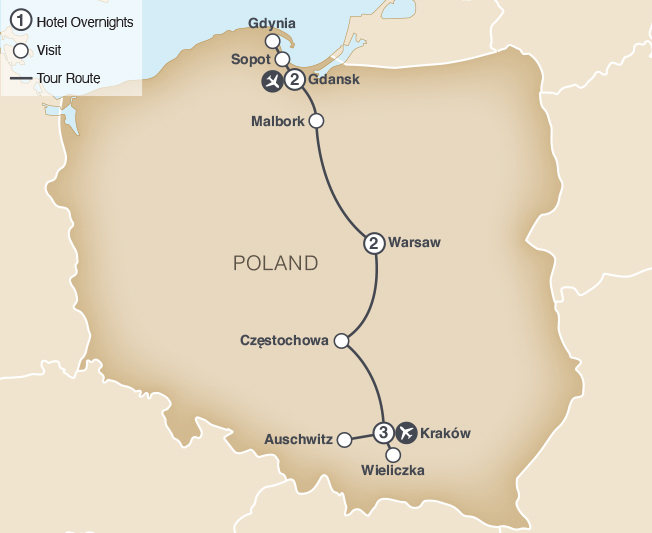