See the Granddaddy of all Parades from your reserved seats along Colorado Boulevard. Explore Los Angeles on a sightseeing tour and ring in the New Year in style with a private gala event.

Itinerary
Day 1  Arrive in Southern California
Welcome to the Granddaddy of parades, the 134th Tournament of Roses Parade, featuring the beautiful pageantry and tradition of magnificent floral floats, high-stepping equestrians and spirited marching bands. For four nights, stay at the Renaissance Long Beach Hotel. Join your Tour Manager tonight for a welcome orientation.
Day 2  Los Angeles Sightseeing Tour and Academy Museum of Motion Pictures
Today a local guide conducts a tour of Los Angeles and Hollywood. From the Our Lady of the Angels Cathedral to the Disney Concert Hall, home of the Los Angeles Philharmonic Orchestra, the tour is a blend of old and new See the Hollywood Bowl, Kodak Theater and the legendary Grauman’s Chinese Theater. In the afternoon a visit to the Academy Museum of Motion Pictures is planned. Here, the collection of film-related objects and technology is highlighted by a vast range of still and moving images covering the history of motion pictures. Meal: B
Day 3  Rose Parade Float Building and New Year’s Eve Festivities
This morning, go behind the scenes in Pasadena for the Rose Parade Float Building. See the floats being built up close by the hundreds of people working to finish their floats. Marvel at the thousands of various flowers from around the world that were used to create the world’s most imaginative floats. Join an optional excursion to the Ronald Reagan Presidential Library which chronicles the storied career of Ronald Reagan which spanned more than five decades.

This evening, ring in the New Year with your newfound friends at a private New Year’s Eve gala event. Put on your dancing shoes as a live orchestra fills the room with sounds from yesterday and today. Enjoy a spectacular dinner and champagne toast to celebrate the dawning of a New Year. Meals: B, D
Day 4  134th Tournament of Roses Parade
The event you came for is about to begin. You have reserved bleacher seats along Colorado Boulevard and after breakfast you depart for the Tournament of Roses Parade. View the animated floats, the precision of the marching bands and the equestrian teams as you become part of an event that is seen throughout the world by millions.

Later, travel north up the coast to the pretty town of Santa Monica. Here, there is time to explore the exciting Santa Monica Pier. Delight in the wide array of shops, arcades and lively entertainment. Tonight, your farewell dinner is in Santa Monica hosted by your Tour Manager. Meals: B, D
Day 5  Homeward Bound
Your transfer from the hotel to the airport is included for your flight home. Your Tour Manager will help you with arrangements to Los Angeles International Airport. Meal: B 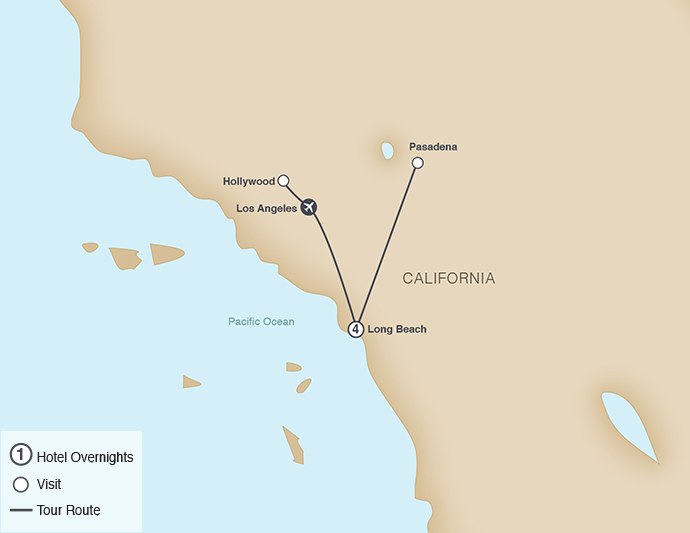 Dates and Rates
Rooms for the night before the tour are available. Cost for a room in Long Beach is $329, tax included