Itinerary
Day 1  Arrive in Calgary
Welcome to one of North America’s most rugged and beautiful cities, Calgary. Known for its cowboys and spectacular beauty, Calgary was brought to the world’s attention during the 1988 Winter Olympics. Meet your Tour Manager in the hotel lobby at 6:00 p.m. for dining suggestions.
Day 2  Fort Calgary and Heritage Park
After breakfast, embark on a panoramic sightseeing tour of Calgary. See the city’s many communities along with Stampede Park and Canada Olympic Park. At Fort Calgary learn about the city’s colorful history. Then, take a step back into Canada’s historic past at Heritage Park. Here you will learn about life as a 19th-century fur-trader or old-fashioned blacksmith. In the Gasoline Alley Museum, admire the collection of 1908 REO Autobuggies and 1912 Buicks, or stroll through Heritage Town Square and chat with the locals in their traditional clothing. Meals: B, D
Day 3  Dinosaurs of the Royal Tyrrell Museum
In the town of Drumheller see the “World’s Largest Dinosaur” en route to the Royal Tyrrell Museum. Home to more than 130,000 fossils the Royal Tyrrell is situated inside Midland Provincial Park which is part of the Dinosaur Trail stretching from the Alberta Badlands to Dinosaur Provincial Park. Take a leisurely walk in the park and see the fascinating exhibits and displays in this palaeontology research center. Later, continue to Edmonton. Meal: B
Day 4  West Edmonton Mall and Jasper National Park
Begin the day at North America’s largest shopping center, the West Edmonton Mall. With over 800 stores, nine world-class attractions, two hotels and over 100 dining venue, the West Edmonton Mall has something for everyone. Later, travel to Jasper National Park, the largest park in the Canadian Rockies and a UNESCO World Heritage Site. In spite of its highways and railroad, Jasper National Park looks very much like it did when David Thompson, Canada's great fur-trade-era explorer, first saw it. Settle in for a 2-night stay. Meals: B, D
Day 5  Maligne Lake Cruise
Today enjoy the breathtaking scenery of Jasper National Park as you cruise Maligne Lake with its unparalleled vistas. Learn of the local history, geology, wildlife and glaciology of Maligne Lake and Jasper National Park as some of the most spectacular scenery in the Rockies drifts past your window. Watch moose lazily wander the shoreline and look for other wildlife that are native to the area. In the afternoon, return to Jasper in plenty of time for exploring. Meal: B
Day 6  Athabasca Glacier Snocoach Ride and Glacier Skywalk
Today, trade in your motorcoach for a “snocoach” and venture on to North America’s largest glacier, the Columbia Icefield’s Athabasca Glacier. You will travel in a specially designed vehicle to the middle of the glacier, as your driver points out interesting geological features. At the icefall below the glacier headwall, you will step out onto ice formed from snow which fell as long as 400 years ago. Then, take a walk on the incredible Glacier Skywalk, a glass-floored observation platform perched 918 feet above spectacular glacier formed valleys and rushing waterfalls. Later, arrive in the mountain town of Banff. Meals: B, L
Day 7  Johnson Lake Hike and Lake Louise
After breakfast take the short drive to beautiful Johnson Lake just outside Banff. Here, you break into smaller groups for a leisurely interpretive hike around the lake to learn about the flora and fauna as well as the history of this peaceful region. A picnic lunch is included before traveling to beautiful Chateau Lake Louise where majestic mountains soaring skyward are reflected in the vibrant blues of the glacier-fed Lake Louise. Back in Banff, explore this quaint village, full of wonderful shops and charming boutiques. Meals: B, L
Day 8  Banff Sightseeing and Calgary Tower
This morning explore the many attractions of Banff. See Bow Falls and Tunnel Mountain before climbing aboard a gondola for a ride in enclosed cars to the top of Sulphur Mountain. Spectacular panoramic views of the village and valley below await. Tonight, dinner is in Sky 360, high atop Calgary Tower for a memorable evening. Meals: B, D
Day 9  Travel Home
Following breakfast, depart Calgary on a group transfer to the Calgary Airport for flights home after 10:00 a.m. Meal: B 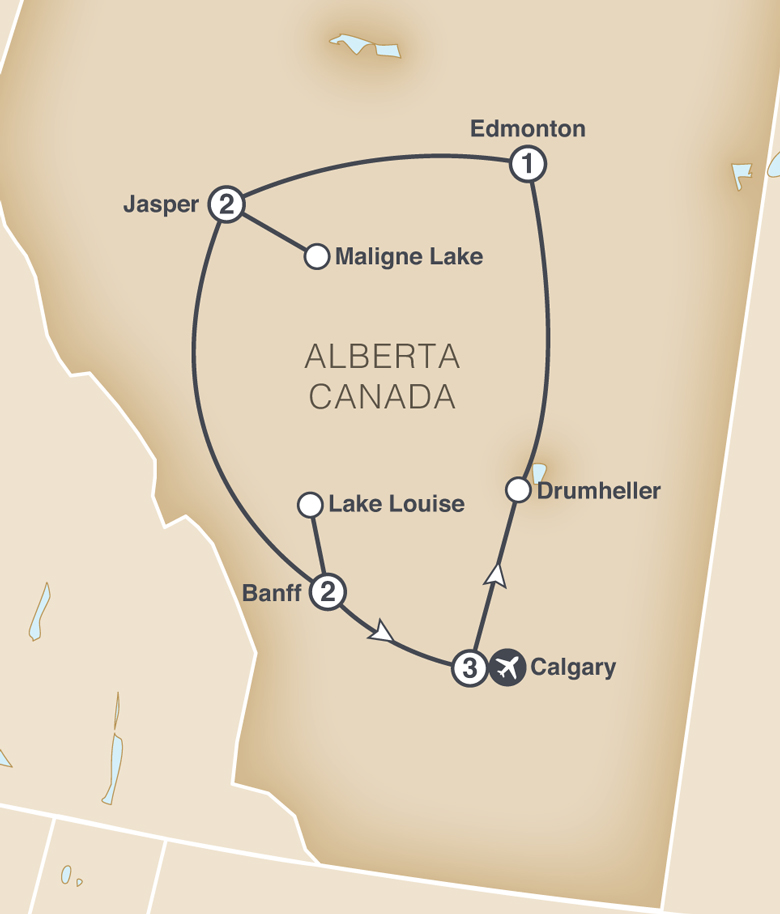 Dates and Rates
Rooms for the night before and after the tour are available. Cost for a room in Calgary before the tour is $249 and after the tour is $209, tax included. Each U.S. citizen must have a valid passport. Expiry date of passports should be at least 6 months after the return date of tour. If you don’t have a passport, call our office and we’ll tell you how to apply for one. Some countries require visas for entry by U.S. citizens. We will send visa applications and instructions if a visa is required for your tour. Holders of non-U.S. passports should contact their nearest consulate and inquire about the necessary passport or visa documentation required for entry into the countries visited. NOTE: Due to airline security measures, your passport name must match your airline ticket name and your tour reservation name or you may be denied aircraft boarding.