Itinerary
Day 1  Arrive in Denver
Welcome to Denver, the “Mile High City.” Meet your fellow travelers at 5:00 p.m. for a get-acquainted dinner hosted by your Tour Manager. Meal: D
Day 2  Rocky Mountain National Park
Departing Denver, venture into Rocky Mountain National Park, a living showcase of the grandeur of the Rocky Mountains. With elevations ranging from 8,000 feet on the wet, grassy valleys to 14,259 feet at the weather-ravaged top of Longs Peak, the park is filled with breathtaking scenery and experiences. Following the Trail Ridge Road a stop at the Alpine Visitor Center offers an opportunity to learn more about this fascinating place. Meal: B
Day 3  Leadville Colorado & Southern Railroad
Today, travel to historic Leadville to board the Leadville Colorado & Southern Railroad. While onboard, learn about the fascinating history of the railroads and hear ghost stories and tales of the wild from your conductor while traveling north along the Arkansas River Valley. Rising up 1,000 feet from the valley floor you will be greeted by spectacular views of Fremont Pass and the two tallest peaks in Colorado, Mount Massive and Mount Elbert. Later, travel through scenic Monarch Pass and Curecanti National Recreation Area while en route to Montrose. Meals: B, Box Lunch
Day 4  Durango & Silverton Narrow Gauge Railroad
This morning, visit the Black Canyon of Gunnison National Park, Then, it’s “full steam ahead” as you board the Durango & Silverton Narrow Gauge Railroad. Voted one of the “Top Ten Most Exciting Train Journeys in the World” by the Society of American Travel Writers, this route winds through the spectacular and breathtaking canyons in the remote wilderness of the two-million acre San Juan National Forest. The locomotives used today remain 100% coal-fired, steam-operated and are maintained in their original condition. Later, check into the Sky Ute Casino Resort where you may wish to give “Lady Luck” a try. Meals: B, D
Day 5  Mesa Verde National Park
Visit the land of the ancient Pueblo Indians in Mesa Verde National Park. The fascinating cliff dwellings and culture of these people provide you with a look into a society that existed approximately 1,400 years ago. Building elaborate stone communities, the Pueblo developed their own society that existed for some 700 years, before disappearing. Archeologists called them Anasazi, from a Navajo word translating as “the ancient ones.” Meals: B, D
Day 6  Cumbres & Toltec Scenic Railroad
Your day begins as you board the motorcoach and ride to the Cumbres & Toltec Scenic Railroad, the original Rio Grande Line. This is America’s most spectacular narrow gauge steam railroad. Explore 50 miles of wild and rugged territory between Chama, New Mexico and Antonito, Colorado, the highest point on the railroad. Meals: B, L
Day 7  Royal Gorge Route Railroad and Garden of the Gods
Aboard the Royal Gorge Railroad follow the 12-mile route along the old Denver and Rio Grande Western train line. Ride through the “Grand Canyon of the Arkansas” on an unforgettable journey over the famous Hanging Bridge, which clings precariously to the steep granite walls of Royal Gorge. Then, enjoy a drive through the stunning Garden of the Gods. This 1,300 acre park reflect the rich diversity of the terrain and red sandstone formations tell a unique geological story. Meal: B
Day 8  Cripple Creek and Pikes Peak Cog Railway
Begin the day with a ride on the Cripple Creek & Victor Narrow Gauge Railroad. Scenic wonders await around every curve and this century-old steam locomotive is reminiscent of the gold mining days of the area. Then “Ride to the Clouds” aboard the Pikes Peak Cog Railway, the highest cog railroad in the U.S. which stretches nine miles long as it vertically climbs to almost 14,000 feet. This evening assemble for a farewell dinner, sharing memories of this unforgettable scenic rail adventure. Meals: B, D
Day 9  Denver and Home
Following breakfast, say goodbye to Colorado with a group transfer to the Denver International Airport for flights home after 12:00 p.m. Meal: B 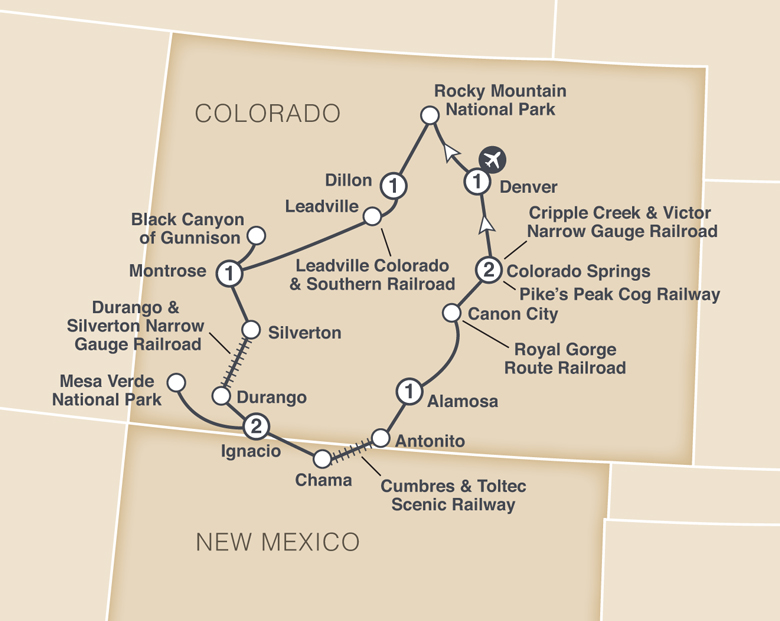