Itinerary
Day 1  Depart USA
Depart the USA on your flight to the Republic of Uganda in Africa.
Day 2  Arrival and Kampala
Karibu, and welcome to Uganda! Upon arrival in Entebbe International Airport, you will be met and transferred to your hotel in the capital city of Kampala.
Day 3  Kampala & Local School Visit
Make connections across cultures with a visit to Awegys Secondary School, where you’ll see firsthand a day in the life of Ugandan youth. Your trip also helps support the school, which provides an education to at-risk youth in Uganda. Afterwards, enjoy a guided tour of Kampala before returning to the hotel for a leisurely evening. Meals: B, L, D
Day 4  Kampala to Kibale Forest
This morning, depart with your guide for the Kibale Forest region. The forest is home to at least thirteen primate species, including the red colobus and L’Hoest’s monkey, earning its reputation as “the Primate Capital of the World”. Stop en-route for lunch before arrival at your accommodations. Meals: B, L, D
Day 5  Chimp Trekking in Kibale Forest & Bigodi Wetlands Hike
Kibale Forest National Park is widely considered to offer some of the best chimpanzee tracking in Uganda. Additional primates include red-tailed, vervet, red colobus, black-andwhite colobus, grey-cheeked mangabey, and olive baboons. Black bee-eater and green pitta are among the bird species found in Kibale. Large mammals such as elephant, buffalo, leopard, lion, and warthogs also inhabit the park, although not as easily seen as the primates or birds. This morning, set out on a chimpanzee trek of two – four hours in the depth of the rainforest, offering the chance to see chimps in their natural habitat. Watch these captivating animals as they swing from the fruiting trees. Bird lovers are also in for a treat, as the rainforest hosts an astonishing 335 species. After the trek, return to your accommodations for lunch. Later, depart on a nature walk, lasting up to three hours, through the Bigodi Wetlands, home to over 200 bird and eight primate species. The Bigodi conservation project began as a local environmental effort run by the communities of Kibale. Beyond conserving the wetlands and its wildlife, the project has also supported the building of a local school, safe drinking water for residents, and local health care efforts. Meals: B, L, D
Day 6  Queen Elizabeth National Park
Enjoy breakfast at the lodge before departing for Queen Elizabeth National Park. During the journey towards the park, the incredible scenery of the “Mountains of the Moon” unfolds. After free time upon arrival, embark on an afternoon game drive in the park. Elephants, buffalo, Uganda Kob, topi, lions, and waterbuck are among the 95 mammal species inhabiting the park, along with over 50 species of raptors. A stop is also made at Lake Katwe to see the traditional methods of mining salt from the lake’s waters. Meals: B, L, D
Day 7  Queen Elizabeth National Park
Depart on a morning game drive in the park for a chance to see the lions at hunt and the hyenas before they make their daily retreat into the woods. This afternoon, set sail on the Kazinga Channel, exploring the waterway known for its various bird species and hippo population. Elephants are often seen drinking from the shores. Spend the evening relaxing at the lodge or enjoy an evening game drive. Meals: B, L, D
Day 8  Bwindi Impenetrable Forest
Enjoy a final morning game drive before heading to Bwindi Impenetrable Forest National Park. Home to approximately half of the world’s endangered mountain gorillas, this ancient forest unfolds over the steep ridges of the Albertine Rift Valley, providing breathtaking views and extraordinary wildlife viewing. Upon arrival, time permitting, set out on a tour of the Batwa cultural trail and surrounding community. Relocated outside of the park as part of wildlife conservation efforts, this ancient hunter-gatherer tribe now shares their stories, songs, and traditions with visitors. Meals: B, L, D
Day 9  Bwindi National Park Gorilla Trek
The hike of a lifetime begins as you discover the incredible biodiversity of the park on your gorilla trek! Primates, birds, butterflies and a variety of hardwood trees, ferns and plant life surround you as you trek through the park in search of these amazing animals. After an early breakfast, meet the park rangers who will serve as your guides for this fantastic experience. On average, gorilla trekking lasts three to eight hours total, but once you meet the gorillas, you will be able to spend an unforgettable hour with them in their native habitat during this awe-inspiring adventure. Depending on the length of your trek, enjoy a picnic lunch in the forest or upon returning to the lodge. After trekking, visit with a local women’s cooperative to experience Ugandan culture, including traditional handicrafts, arts, music, and dance, as you learn about their heritage. End the day with a farewell dinner at the lodge as you recount the amazing experiences and animal encounters of this journey in Uganda. Meals: B, L, D
Day 10  Depart for USA
This morning, transfer to Kihihi Airstrip for the one-hour flight from Kihihi to Entebbe International Airport for your international flight connection. Meal: B 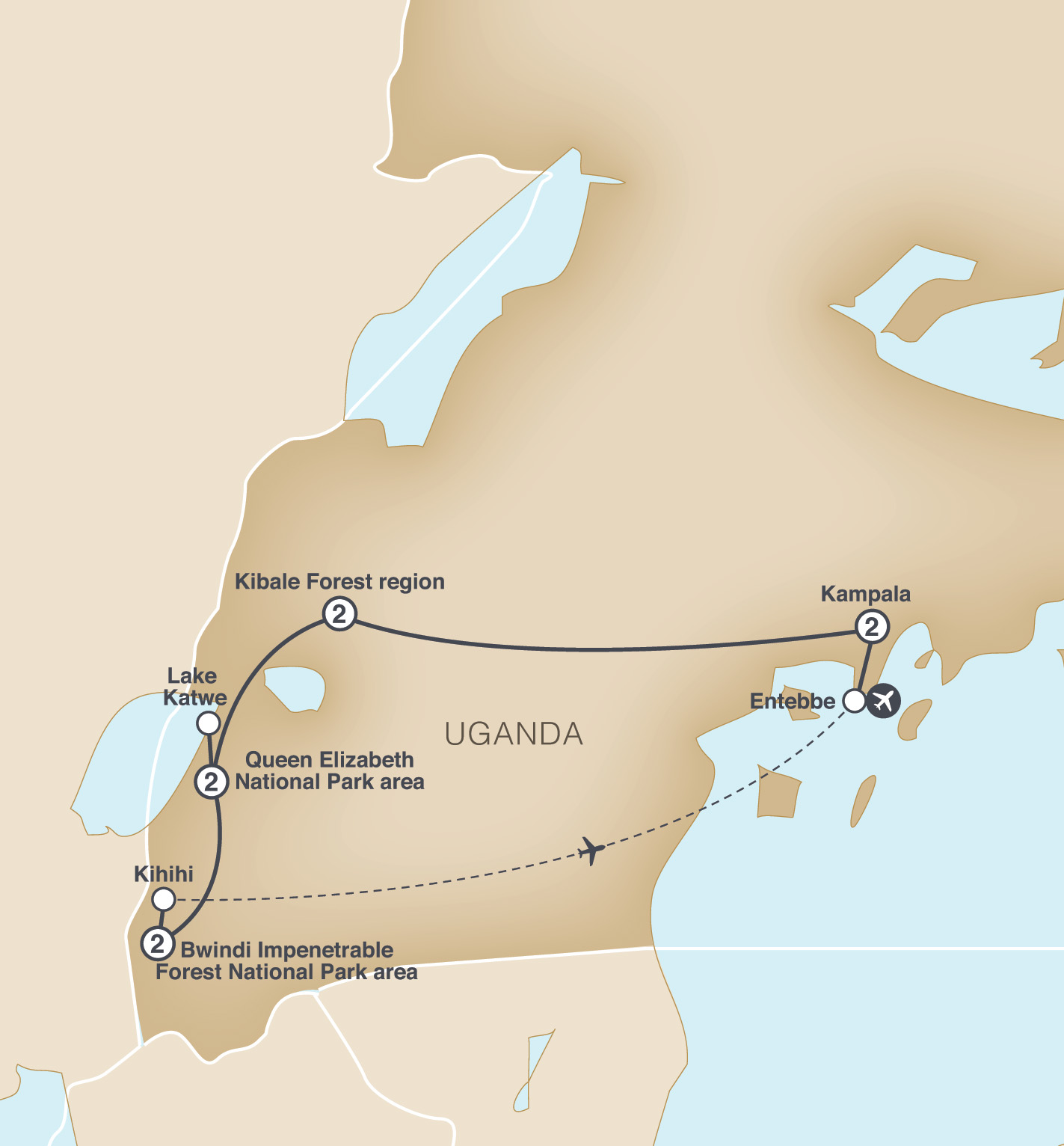