Itinerary
Day 1  Depart the USA
Depart the USA on your overnight flight to Istanbul, Turkey.
Day 2  Istanbul, Turkey
Upon arrival, you’ll be met at the airport by a representative of Mayflower Cruises & Tours and transferred to the hotel. Dinner is included at a local restaurant this evening. Meal: D
Day 3  Istanbul
Breakfast at the hotel. City tour including the Hippodrome Roman, the Blue Mosque and the Basilica Cistern. In the afternoon, visit the Topkapi Palace built by Sultan Mahmet the Conqueror and finally end at the Grand Bazaar. This is the legendary market that is considered the best souk in the world featuring antiques, jewelry and carpets.

Enjoy an included traditional Turkish coffee at a local coffee shop. Dinner and overnight at the hotel in Istanbul. Meals: B, D
Day 4  Istanbul / Ankara
Breakfast at the hotel and then depart for a visit to the Basilica of Saint Sophia, one of the largest shrines ever built. A highlight of the day will be the scenic cruise on the Bosphorus by private boat. Sail past the medieval hilltop fortress of Rumeli. See the grand façade of the Dolmabahce Palace and the elegant former summer residence of the sultan, the Beylerbeyi Palace.

Afterwards drive to Ankara, the capital of Turkey. Dinner and overnight stay at your hotel in Ankara. Meals: B, D
Day 5  Anakara / Cappadocia
After breakfast, start exploring the capital city of Turkey with the Anatolian Civilizations Museum where you will have the chance to discover the archeological findings that belong to Hittites, Urartians, Phrygians and many other civilizations which had left traces in the cradle of civilizations, Anatolia.

Continue by visiting the Mausoleum of Ataturk, the burial place of the national hero who founded the modern Republic of Turkey. In the afternoon, you will depart to Cappadocia. You will have the chance to enjoy the picturesque view of Salt Lake on route.

Once you arrive in Cappadocia, you will check into your hotel, where you will dine and spend the night. Dinner and overnight stay at your hotel in Cappadocia. Meals: B, D
Day 6  Cappadocia
If you choose, start the day with an optional early morning hot-air balloon ride.

After breakfast explore Cappadocia with its unique landscapes formed by erosions of winds and water. Your expedition will start with the Monastic Center of Goreme which was founded by St. Basil as the first Monastic Center of Christianity during 4th century.

Continue to Pasabag Valley. You will adore the view of the towershaped hermitages that look as if they have been sculptured by contemporary artists! Your next stop is Kaymakli Underground City, a subterranean settlement composed of troglodytic cave dwellings providing shelter for early Christians protecting themselves from invaders.

Continue to the rock-carved natural citadel of Uchisar promising a superb view of the region from its top. The last stop of today’s touring before returning to the hotel is Avanos, the famous town of Cappadocia that was established by the Hittites on the riverbanks of Halys River. You will visit one of the studios of a pottery artist of Cappadocia and watch the interactive presentation of creating masterpieces of pottery and ceramics.

Dinner and overnight stay at your hotel in Cappadocia. Meals B, D
Day 7  Cappadocia – Konya
After breakfast, you will be driven to Konya that was called Iconium during the Roman period and was an important post for Roman legion and control of the trade routes of antiquity.

It served as the Capital of Seljuk Turkish Kingdom during the 13th century. You will have the chance to visit the Mausoleum of Mevlana, the founder of Whirling Dervishes, Sultanhan Caravanserai, a building that ranks as one of the Seljuk masterpieces.

Dinner and overnight stay at your hotel in Konya. Meals: B, D
Day 8  Konya – Hierapolis – Pamukkale
After breakfast you will leave for Pamukkale. Start your exploration with Hierapolis founded during the Hellenistic period as a control point of trading routes connecting East to West.

In the Roman Period, Hierapolis became a center of worship to Hades and Apollo as well as a thermal center where massive Roman Baths were built. Today’s ancient city of Hierapolis has recently been appointed as a UNESCO World Heritage Site.

Wandering through the colossal tomb chambers of Necropolis, you will comprehend the wealth of the society that could afford such impressive graves. Get to see one of the bestpreserved Roman Theatres of the world of archaeology. Built during 2nd century, the theatre of Hierapolis was used for both theatrical activities and shows of violence. Dinner and overnight stay at your hotel in Pamukkale. Meals: B, D
Day 9  Pamukkale – Kusadasi
After breakfast, you will depart for Kusadasi. Explore the timeless city of Ephesus where history and archaeology will offer you their majesty with incredible richness.

Ephesus was the Capital of the Province of Asia Minor famed for its flavorsome market during the Roman Era. You will pursue the traces of the glorious past of Ephesus walking on the Marble Road that runs through the city. You will get to see Temple of Hadrian, Library of Celsus and the Great Theater of Ephesus.

Return to your hotel in Kusadasi for dinner and overnight stay. Meals: B, D
Day 10  Kusadasi – Pergamon – Troy – Canakkale
After an early breakfast, you will depart from the hotel to explore the Greco-Roman city of Pergamon famous for its Asclepion, the ancient medical center of which its purpose was most like a spa of the 19th century.

Leaving the Asclepion, you will see the Acropolis, the Altar of Zeus, and the Temples of Athena, Trajan, and Dionysus. It is from a staircase leading from the Temple of Athena that the magnificent 10,000 seat theatre will be seen.

Continue your drive to a very wellknown Ancient City. Troy. You will be thrilled by the ancient city that witnessed the battle of heroes. While exploring the ruins of Troy, you will enjoy the detailed narration of your guide about this legendary city including both the historical facts and the mythological stories that immortalized its name.

Dinner and overnight at your hotel in Canakkale. Meals: B, D
Day 11  Cannakkale – Gallipoli – Istanbul
After breakfast, you will be driven to Istanbul. Your scenic drive will first take you to Gallipoli, the site of the incredible battle played out here during World War I.

Upon arrival to Istanbul, check-in to your hotel. Afternoon will be at leisure. Farewell dinner will be at a local restaurant serving traditional Turkish food. Overnight at your hotel in Istanbul. Meals: B, D
Day 12  Depart for USA
After breakfast at the hotel, transfer to Istanbul International Airport for your flight home. Meals: B 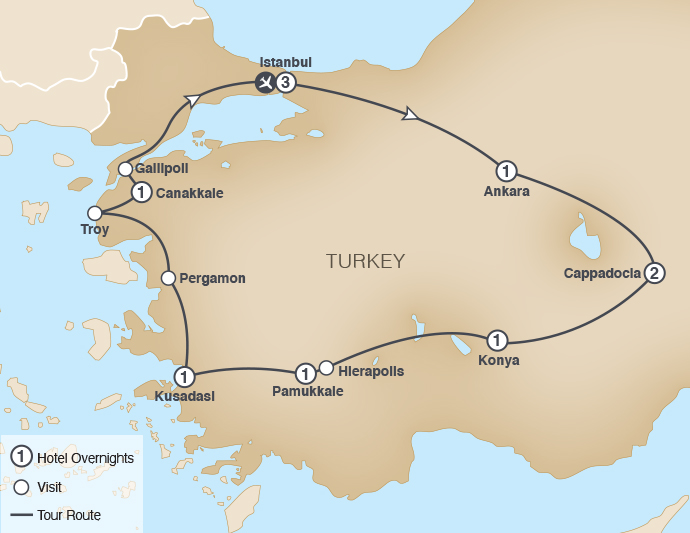