Join an incredible journey to the heart of Canada’s easternmost province of Newfoundland, a land of early explorers, scenic beauty and fascinating wildlife.

Itinerary
Day 1  Arrive in Newfoundland
Welcome to Canada’s most eastern city, St. John’s. Meet your Tour Manager in the hotel lobby at 6:00 p.m. for dining suggestions.
Day 2  Touring in St. John’s
After a welcome breakfast your local Tour Manager conducts a sightseeing tour of St. John’s. Begin at Signal Hill National Historic Site, where Guglielmo Marconi received the world’s first transatlantic wireless signal in 1901. Also see Cabot Tower, Old Town, the Basilica of St. John the Baptist and the colourful houses of Jelly Bean Row. Also visit the community for Quidi Vidi and stop at a local brewery for a tour and tasting of their famous iceberg beer. The remainder of the afternoon is free before an included dinner. Meals: B, D
Day 3  The Irish Loop & Ferryland
Today, travel part of the scenic Irish Loop, home to charming fishing villages and amazing scenery. Visit the Colony of Avalon and learn how it was founded in 1621 by George Calvert, later Lord Baltimore. Ongoing excavations have revealed the locations and designs of original structures, as well as more than two million 17th-century artifacts. Enjoy an included lunch before a stop at a local winery for a tour and tasting of its variety of berry wines, including wild blueberry. Meals: B, L
Day 4  Cape Bonavista & Trinity
This morning visit Ryan Premises National Historic Site, which commemorates the prosperous fishing industry from the early 1500s to present day. Continue to Cape Bonavista, where you’ll see the interesting Cape Bonavista Lighthouse, the famous Dungeon rock formation, and admire the beautiful cliffs and coastline. In Bonavista, learn how modern North America began when John Cabot made landfall here in 1497.

Later, travel to historic Trinity one of the oldest communities in North America. Lunch today is local fare of tasty Newfoundland fish and chips. Enjoy a guided walking tour and hear stories that bring this picturesque village to life. Meals: B, L
Day 5  Terra Nova National Park & North Atlantic Aviation Museum
Start the day in Terra Nova National Park. Stop at the park’s visitor center enjoy and short guided walk. Continue on to Gander, once the international aviation crossroads of the world. Here, visit the North Atlantic Aviation Museum and learn the history of North Atlantic aviation from the 1930s to its unexpected role in the days following the September 11 tragedy. Meals: B, D
Day 6  Silent Witness Memorial Park & Twillingate
Visit the Silent Witness Memorial, a tranquil park dedicated to the memory of the 256 individuals who lost their lives on December 12, 1985 in the Arrow Air Crash. Along the “Road to the Isles,” the local predilection for colourful language comes across with place names such as “Too Good Arm,” “Virgin Arm” and “Crow Head.” On the way to Twillingate visit the Prime Berth Fishing Museum and see Long Point Lighthouse. Meals: B, D
Day 7  Heart’s Content, Cupids & St. John’s
Rejoin the Trans-Canada Highway and journey to the Avalon Peninsula. Drive through Heart’s Delight and Heart’s Desire to the small town of Heart’s Content to visit the Heart’s Content Cable Station Provincial Historic Site, where the first transatlantic cable was completed in 1866. Continue to Cupids Cove Plantation, the archaeological site of the oldest official British colony in Canada. Founded by John Guy in 1610, you’ll learn the history of the settlement, hear stories about its colourful characters and see artifacts at Cupids Legacy Centre. Continue to St. John’s where the evening is at your leisure. Meals: B, L
Day 8  Witless Bay Ecological Reserve Cruise & Screech-In Ceremony
This morning, travel to Witless Bay where whales and puffins abound. Board your vessel for a narrated cruise around the islands. Newfoundland has the largest concentration of humpback whales in the world and is known as the “Seabird Capital of North America,” with the largest Atlantic puffin sanctuary in North America.

Return to St. John’s with a stop at Cape Spear National Historic Site, the most easterly point in North America. The afternoon is free to explore the more of St. John’s on your own or perhaps shop for souvenirs. This evening, your Tour Manager hosts a special farewell dinner which includes a traditional Newfie Screech-In ceremony, the best way to end your time in Newfoundland. Meals: B, D
Day 9  Travel Home
This morning a group transfer to St. John’s International Airport is included for flights home. Meal: B 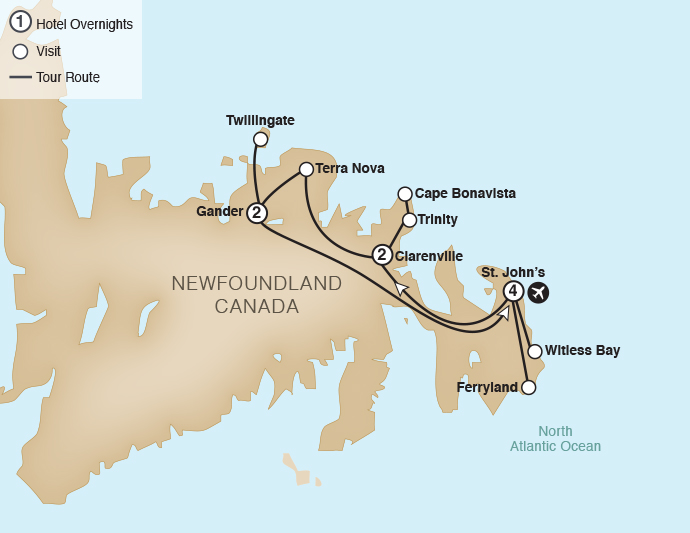