10 Days • 15 Meals
Visit 5 UNESCO World Heritage Sites and explore the Norman Palace in Palermo and visit the duomo in Monreale. Experience the ancient temples of Agrigento and enjoy a guided touring in Syracuse and Taromina. Ascend to the base station of Mount Etna with a local farm visit with lunch and wine-tasting. Traverse the Malta Channel by catamaran, see local artisans at work in the Ta’ Qali Craft Village, and attend a cooking class of regional Maltese specialties. Visit the Ggantija Temples and enjoy a winery tour on Gozo.

Itinerary
Day 1  Depart the USA
Depart the USA on your overnight flight to Palermo, Sicily.
Day 2  Palermo, Sicily
Benvenuto! Upon arrival, you’ll be met by a Mayflower Cruises & Tours representative and transferred to your hotel. The remainder of the day is free to begin experiencing the local surroundings. This evening, join your tour Manager and fellow travelers for dinner at the hotel. Meal: D
Day 3  Palermo / Monreale
Begin the day with a discovery of Palermo, home to Byzantine mosaics, Arabesque domes, and frescoed cupolas. During the guided tour, visit the impressive Norman Palace, a UNESCO World Heritage Site. The Torre Pisana (Pisan Tower) is home to the Astronomical Observatory since 1791 and one of the last surviving castle towers of the area. The ornate interior of the palace’s chapel features amazing glittering gold mosaics depicting biblical scenes and inlaid marble floors. See the Royal Apartments and King Roger’s Salon with its magnificent decorations and animal mosaics. The outside of the palace is also stunning with its exotic garden, laid out like an art exhibition.

The Ficus Macrophylla that ‘embraces a domestic pine’ is the centerpiece of this tranquil setting. In the city center, visit the famous Ballaró Market, the city’s busiest street market and a fascinating mix of sounds, scents, and local life. Enjoy lunch on your own in this bustling area before departing for Monreale. The UNESCO World Heritage-listed Cathedral of Monreale is one of the most beautiful Norman churches in Sicily and its greatest cultural treasure whose Byzantine mosaics are among the most magnificent in the world. Return to Palermo for an evening at leisure. Meal: B
Day 4  Agrigento and Valley of the Temples – Taormina
Departing Palermo, travel to Taormina with sightseeing enroute. A guided visit of the Valley of the Temples, one of the country’s most historical attractions, showcases an outstanding example of Magna Graecia art and architecture. Encompassing the ruined ancient city of Akragas, it’s highlighted by the stunningly wellpreserved Doric Tempio della Concordia, one of several ridgetop temples, resembling the Parthenon in Athens.

Continue to Piazza Armerina with free time for lunch on your own in this art-filled city. Arrive in Taormina where dinner is included at the hotel this evening. Meals: B, D
Day 5  Syracuse and Taormina
Journey by coach to Syracuse for a guided walking tour in the old town of Ortygia, a UNESCO World Heritage Site and the ‘historical heart of Syracuse’. Explore the Archaeological Park of Neapolis and see the majestic ruins of the Greek Temple of Apollo. Discover the mythology tied to the legendary Fountain of Aretusa, see the Greek Theater, one of the largest in the world, with seats carved out of living rock and the Roman Amphitheater which was home to duels fought by gladiators.

Visit the Latomia del Paradiso and marvel at the Ear of Dionysus – a cavern famous for its acoustics and the sheer beauty of nature. Return to Taormina for a guided tour of this city spectacularly perched on the side of a mountain. Visit the ancient Greek-Roman theatre, still used to this day, and see Mount Etna in the distance.

See the Duomo – the symbol of the city, the main square and stroll along the Corso Umberto. You’ll have time to browse in the local shops before returning to the hotel for an evening at leisure.
Day 6  Mount Etna
Depart the hotel by coach for Mount Etna – the highest active volcano in Europe. Ascend by coach to the base station Rifugio Sapienza at approximately 5900 feet, from where you can explore the now extinct ‘Monti Silvestri Craters’.

Admire a variety of landscapes created over the centuries that now represent a unique place where nature, culture and history combine. After visiting the volcano travel to a local farm for a visit of the vineyards followed by a wine-tasting and lunch of traditional cuisine. The remainder of the day is free of planned activities. Meals: B, L
Day 7  Sicily – Malta
It’s time to depart Sicily for Malta. At the port of Pozzallo, board a high-speed catamaran for the journey of approximately 90 minutes across the Ionian Sea. Travel to Valletta for a guided walking tour of this capital city. As a UNESCO World Heritage Site, it’s an open-air museum. While strolling through the streets, notice how the city is modern while preserving its past.

The ruins of the opera House, ravaged by bombs in WWII, have been transformed into an open-air concert venue. Modern designer stores are intermingled with those selling locally produced handicrafts. View the Grand Harbor from the terrace of the Upper Barrakka Gardens and see the historic towns of ‘Three Cities’ in the distance. Walk past Auberge de Castille, the office of the Prime Minister, and see St. John’s Cathedral. At the end of the tour, arrive at the hotel for check in and dinner. Meals: B, D
Day 8  Valletta
Today’s experience is a cultural immersion into local life. Along with the local guide, arrive at the Ta’ Qali Crafts Village located in the former RAF wartime airfield. Observe as local artisans create beautiful items from glassblowers and goldsmiths making filigree jewelry to sculptors and lace-makers.

Continue to Dingli where the limestone cliffs tower over the sea for a visit to a local farm and a traditional Maltese cooking class. While exploring the farm, select and harvest the ingredients to be used in the class as you prepare a 3-course menu and dine on your creation for lunch. Meals: B, L
Day 9  Gozo
On the final day, explore the island of Gozo, a short ferry ride from Malta. Rich with lush green landscapes and rolling countryside dotted with traditional villages, Gozo offers a relaxing pace. Board the waiting motorcoach and arrive at the Ggantija Temples, the oldest free-standing stone structures in the world and a UNESCO World Heritage Site.

Continue to the famous Saltpans where the coast is characterized by a checkerboard of rock-cut saltpans protruding into the sea. In Gharb, visit a winery and meet the owners who talk about what makes their wines so unique. Afterwards, sample their vintages along with some local snacks.

Continue to the capital of Victoria for a visit of the Old Citadel, rising above the capital and dominating the skyline. Return to Malta by ferry for some free time before enjoying a farewell dinner. Meals: B, L, D
Day 10  Malta – USA
It’s time to bid ‘arrivederci’ to Sicily and Malta as you depart the hotel on the transfer to the Valletta airport for your flight home. Meal: B 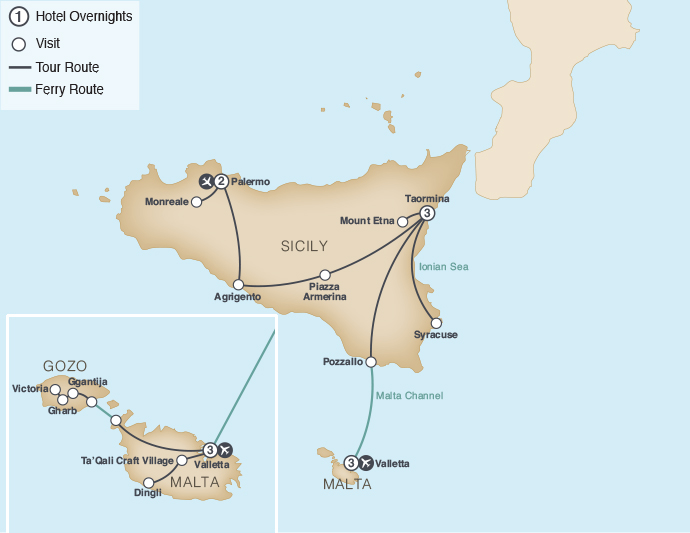