12 Days • 18 Meals
Air Holiday
Join us on an incredible journey to Canada’s easternmost province of Newfoundland and Labrador, a land of early explorers, scenic beauty and fascinating wildlife.

Itinerary
Day 1  Arrive in Newfoundland and Labrador
Welcome to Canada’s most eastern city, St. John’s. Meet your Tour Manager in the hotel lobby at 6:00 p.m. for dining suggestions.
Day 2  Tour St. John’s and Witless Bay Ecological Reserve Cruise
After a welcome breakfast our local Tour Manager takes us on a narrated tour of St. John’s including Signal Hill, where Guglielmo Marconi received the world’s first transatlantic wireless signal in 1901. See the Basilica of St. John’s and the community for Quidi Vidi before visiting Canada’s easternmost point of land at Cape Spear Lighthouse. At Bay Bulls our vessel takes us through the Witless Bay Ecological Reserve to see the numerous species of whales, along with puffins and a multitude of other seabird species. Meals: B, L
Day 3  Cupid’s Cove Plantation and Heart’s Content Cable Station
Today we visit Hawthorne Cottage, home of Arctic explorer Caption Bob Bartlett, who took Robert Peary to the North Pole in 1909. At Cupid’s Cove Plantation we learn the history of the colonists who arrived here in 1610 through the ongoing archaeological dig. Then, we stop at Heart's Content Cable Station, site of the first permanent telegraph cable connecting Europe and North America. Meals: B, D
Day 4  Cape Bonavista Lighthouse, John Cabot and Trinity Village
At Cape Bonavista Lighthouse Provincial Historic Site we learn about the lighthouse and the light keepers. Stop at the John Cabot Statue marking the location where the Venetian navigator landed in 1497 before coming to Ryan Premises National Historic Site where this merchant-run salt fish complex served as a key economic force behind the inshore fishery. Next we visit the beautifully-reconstructed brick Georgian Lester-Garland House to learn the ties between Newfoundland and England. Meal: B
Day 5  Terra Nova National Park, Twillingate and Gander
Travel through ragged-shaped Terra Nova National Park with its sheltered inlets, forests and bogs. Scenic photo stops will be made en route to Twillingate where the 47-foot tall Long Point Lighthouse awaits. Visit the museum, climb to the top and visit the many shops. Later, we arrive in Gander. Meals: B, D
Day 6  Mary March Museum and Rocky Harbour
Discover the rich history of Central Newfoundland, from Aboriginal cultures thriving here 5,000 years ago to the 20th century industrial development at the Mary March Provincial Museum. Displays include artifacts from the ancient Maritime Archaic Indians to the Europeans who settled here. Later, we continue to the town of Rocky Harbour, the gateway to Gros Morne National Park. Meal: B
Day 7  Gros Morne National Park and Traditional Newfoundland Screech-In
Venture into Gros Morne National Park today, a UNESCO World Heritage Site with spectacular mountain ranges, geological wonders and vibrant fishing communities. On a scenic boat cruise see the soaring fjords and moody mountains that tower above a diverse panorama of beaches and bogs, forests and barren cliffs. Later, local entertainers join us for a special “Newfie Screech In,” a unique Newfoundland tradition. Meals: B, D
Day 8  The Vikings of Newfoundland
Located on Newfoundland’s western coast is the L’Anse aux Meadows National Historic Site. Here Norse expeditions sailed from Greenland and built a small Viking encampment of timber-and-sod buildings over 1000 years ago. Now a UNESCO World Heritage Site, costumed Viking interpreters show you the recreated base camp with original artifacts. Meals: B, D
Day 9  Labrador and the Basque Whalers
Sail across the Strait of Belle Isle to Labrador and Red Bay National Historic Site. It was established in the mid-16th century by Basque whalers in search of right and bowhead whales that produce the oil that lit the lamps of Europe. See original Basque artifacts, remains, and restored “chalupa” (boat) at this World Heritage Site. Meals: B, D
Day 10  St. Anthony to Corner Brook
Travel by ferry back to “The Rock” and follow the coast to Port aux Choix National Historic Site. Here, see prehistoric artifacts from four ancient Aboriginal cultures that inhabited Newfoundland’s rugged northwest coast before coming to Corner Brook. Meal: B
Day 11  Corner Brook and Captain Cook
A highlight tour of Corner Brook shows us Humber Arm, the Bay of Islands and Frenchman’s Cove. Enjoy a photo stop at Lark Harbour known for its spectacular views before coming to the Captain James Cook National Historic Site which overlooks the city and the wide Humber Arm of the Bay of Islands. In the afternoon we pay a visit to the Butterfly House before we enjoy dinner and a private concert by local entertainers. Meals: B, D
Day 12  Travel Home
Depart Corner Brook with a group transfer to the Deer Lake Regional Airport for flights home after 9:30 a.m. Meal: B 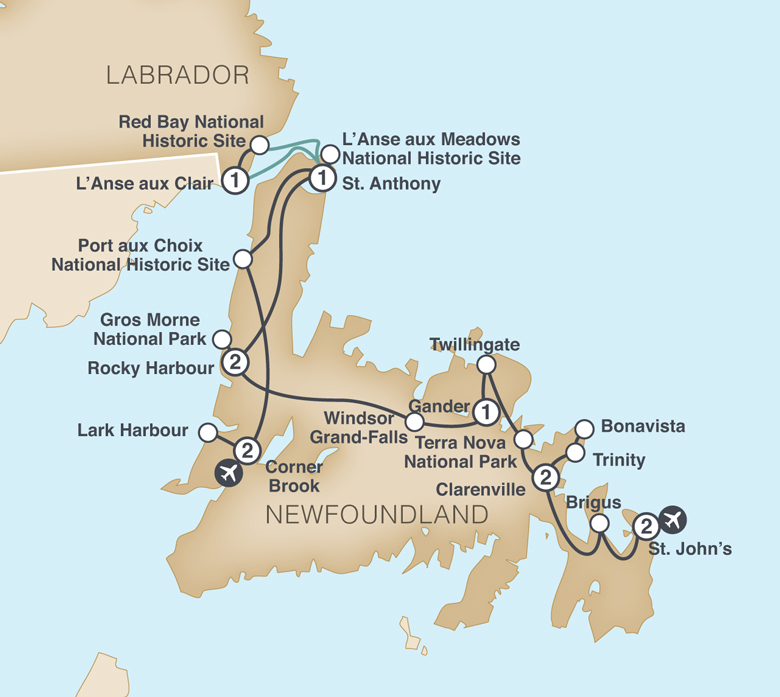 Dates and Rates
Call for air rates and schedules from your city to St. John’s and from Corner Brook. Each U.S. citizen must have a valid passport. Expiry date of passports should be at least 6 months after the return date of tour. If you don't have a passport, call our office and we'll tell you how to apply for one. Some countries require visas for entry by U.S. citizens. We will send visa applications and instructions if a visa is required for your tour. Holders of non-U.S. passports should contact their nearest consulate and inquire about the necessary passport or visa documentation required for entry into the countries visited. NOTE: Due to airline security measures, your passport name must match your airline ticket name and your tour reservation name or you may be denied aircraft boarding.