Itinerary
Day 1  Arrive in Nova Scotia
Welcome to Halifax, Nova Scotia’s oldest and most culturally diverse city, as well as its capital. Meet your Tour Manager in the hotel lobby at 6:00 p.m. for dining suggestions.
Day 2  Halifax, Lunenburg and Peggy’s Cove
After a get-acquainted breakfast a local guide conducts a tour of Halifax. Hear the history of the city’s war years, the devastating Halifax explosion and learn about the city’s connection to the Titanic disaster.
Then, visit the port town of Lunenburg featuring National Historic Sites and a thriving waterfront. Stop at Peggy’s cove, the picturesque fishing village famous for its weathered granite rocks and scenic lighthouse. Back in Halifax, see the beautiful waterfront and visit The Citadel, the restored British fort and National Historic landmark. Meals: B, D
Day 3  Cape Breton Island
Depart for beautiful Cape Breton Island. Originally settled by the Loyalists from New York state, they were followed by Scottish immigrants, choosing this region as it reminded them of their homeland. Visit the Alexander Graham Bell National Historic Site in Baddeck, Nova Scotia, overlooking beautiful Bras d’Or Lake. Meals: B, D
Day 4  Cabot Trail
Spectacular scenery is the highlight today as you travel along the Cabot Trail. Spend the day exploring much of this famed road in Cape Breton Highlands National Park, which winds through charming communities and breathtaking scenery.

A visit to Cape Breton is sure to thrill you. Its only rival in beauty is the seaside French and Scottish settlements nestled below the mountains resembling the highlands of Scotland. You’ll enjoy a relaxing picnic lunch along the way as we experience the scenic nooks and crannies of this remarkable landscape. Meals: B, L
Day 5  Ferry to Prince Edward Island
Travel by ferry across the Northumberland Strait to Prince Edward Island. Your two-night stay on PEI gives you ample time to explore this quaint part of Canada. This evening savor a traditional lobster dinner. Meals: B, D
Day 6  Explore Prince Edward Island
Begin with a tour of Charlottetown, settled by the French, Scottish, English and Irish. Visit the Anne of Green Gables Home, and explore the marvelous beaches and woodlands along the way. Later, enjoy a musical performance at the Confederation Centre for the Arts. Meal: B
Day 7  Shediac Lobster Cruise & Hopewell Rocks
Depart PEI across the nine-mile-long Confederation Bridge to Shediac, “Lobster Capital of the World.” Enjoy a narrated cruise on the warm waters of Shediac Bay while having a freshly cooked lobster lunch. A stop is made at Hopewell Rocks, unique rock formations known for their natural beauty. Meals: B, L
Day 8  Bay of Fundy Ferry & Grand-Pre National Historic Site
Breathtaking views of the Bay of Fundy come into view as the Fundy Rose ferry takes you back to Nova Scotia. Stop at Grand-Pre National Historic Site, site of an 17th and 18th century Acadian Village. Visit the Interpretive Center and stroll the gardens. Tonight, your Tour Manager hosts a farewell dinner. Meals: B, D
Day 9  Travel Home
Depart this morning with a transfer to Halifax’s Stansted International Airport for flights home today. Meal: B 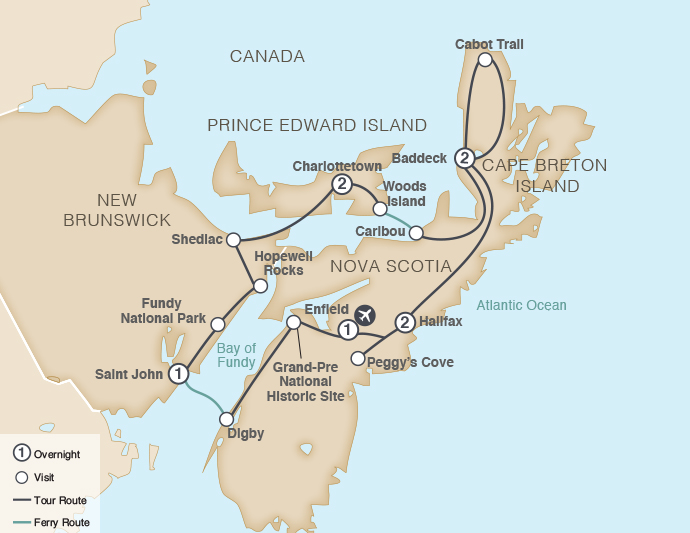 Dates and Rates
Passports and Visas: Each U.S. citizen must have a valid passport. Expiry date of passports should be at least 6 months after the return date of tour. If you don't have a passport, call our office and we'll tell you how to apply for one. Some countries require visas for entry by U.S. citizens. We will send visa applications and instructions if a visa is required for your tour. Holders of non-U.S. passports should contact their nearest consulate and inquire about the necessary passport or visa documentation required for entry into the countries visited.