Itinerary
Day 1  Arrive in New York City
Arrive at New York’s La Guardia Airport and transfer to your lodgings in Manhattan. Meet your Tour Manager in the hotel lobby at 6:00 p.m. for dining suggestions.
Day 2  New York Sightseeing, WTC Memorial & Broadway Show
There is so much to see in this amazing city! A local expert guide shows you the sights, from famous museums of history and art to the center of finance on Wall Street and the interesting Chinatown. Also see Battery Park, the Brooklyn Bridge, Carnegie Hall and St. Patrick’s Cathedral. At Rockefeller Center, climb aboard the elevator to observation deck located at the “Top of the Rock” for a spectacular panoramic view of Manhattan and New York City. Tonight, your reserved seats to a top Broadway Show await. Sit back, relax and enjoy the finest entertainment the nation has to offer. Meals: B, D
Day 3  Statue of Liberty & WTC Memorial
Board your vessel this morning and sail across New York Harbor to visit Statue of Liberty and Ellis Island. This precious American monument symbolizing the ideals established by the Declaration of Independence and the U.S. Constitution. Ellis Island, once a major entry point for millions during the 19th and 20th centuries, now houses a museum honoring the ethnic diversity of our immigrant forefathers.

Fascinating exhibits, including the Registry Room, and Through America’s Gate, all illustrate the path followed by the more than 16 million immigrants. This afternoon pay a stirring visit to the National September 11 Memorial and Museum at the World Trade Center. Here, tribute is paid to those whose heroics brought the nation together. Meal: B
Day 4  West Point, Mount Gulian & Millbrook Vineyards
Leave the city behind today and come to the *West Point Military Academy. Stop at the Visitor Center to learn the history of the academy and see daily cadet life before a guide conducts a narrated tour of the grounds. In Fishkill, lies Mount Gulian, a reconstructed 18th century Dutch manor house on the Hudson River. Take a tour of the house and grounds before donning the trademark white archival gloves and examine artifacts up close. At Millbrook Vineyards and Winery, take a behind-the-scenes tour of the Hudson valley’s first vinifera vineyard. Learn what goes into the making of fine wines and taste their award-winning vintages. Meals: B, D
Day 5  Staatsburgh Mansion & Hudson River Cruise
Start your day with a walk above the Hudson River. The Walkway Over the Hudson is a steel cantilever bridge spanning the river. At the Staatsburgh State Historic Site, tour the stately 79-room Gilded Age mansion of Ruth Livingston and Ogden Mills. This Beaux-Arts style mansion has been lovingly restored to its turn-of-the-century appearance. Later, take to the water aboard the Rip Van Winkle for a 2-hour sightseeing cruise of the Hudson River. See the historic Hudson River lighthouses and waterfront mansions on this narrated cruise. Meals: B, L
Day 6  Maple Syrup & the Roosevelts
Begin the day at Soukup Farms, third generation maple syrup producers. Embark on a hayride tour to see the sugar house with its traditional wood-fired evaporator and the 2,000 taps before tasting the finished product. Then, visit Val-Kill, the only National Historic Site dedicated to a First Lady and learn why Eleanor Roosevelt was one of the most influential women in the world. At the FDR Presidential Library and Museum, see America’s first presidential library. The immersive, interactive exhibits of the FDR administration take a behind-the-scenes look at the Roosevelts.

Tonight, one of the nation’s Top Ten Chocolatiers, Oliver Kita conducts an engaging chocolate and wine pairing in the luxurious surroundings of the historic Rhinecliff Hotel. Dine on delicious local farm fresh ingredients while taking in the stunning views of the Hudson River and Catskill Mountains. Meals: B, D
Day 7  Return Home
Depart the Hudson Valley with a transfer at 8:00 a.m. to New York’s La Guardia Airport for flights out after 1:30 p.m. Meal: B 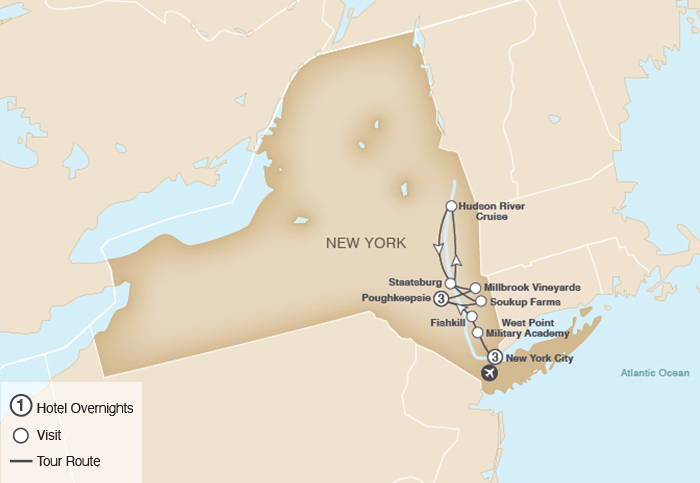 Rooms for the night before the tour are available. Cost for a room in New York City is $479, tax included.