800.323.7604 or contact your local travel professional
Login Sign Up
On the Trail of the Pilgrims
Highlights
Itinerary
Accommodations
Map
Dates/Rates
Photos

7 Days • 12 Meals
400th Anniversary of America’s Founding
Come follow in the footsteps of the Pilgrims and celebrate the 400th Anniversary of America’s founding. See where the Pilgrims first set foot at Provincetown and finally settled at Plimoth Plantation. Also, see the full-scale replica Mayflower II and enjoy a traditional Thanksgiving dinner on this historic journey.

Itinerary
Day 1  Arrive in Massachusetts
Arrive Boston today to begin your journey in search of the Pilgrims. Meet your Tour Manager and fellow travelers at a Welcome Dinner. Meal: D
Day 2  The Pilgrims, Longfellow and Myles Standish
Begin in Boston with a special presentation about the Pilgrims that arrived on the Mayflower as well as the Wampanoan people at the New England Historic Genealogical Society. A narrated tour of Boston includes King’s Chapel Burying Ground where the grave of Mary Chilton, the first European woman to arrive here is located. In Duxbury, visit the home of Pilgrims John and Priscilla Alden, immortalized in Longfellow’s poem The Courtship of Miles Standish. Now a museum, the home saw the Aldens become prosperous farmers and raise 10 children. A stop is made at the grave site of Myles Standish before coming to the hotel. Meals: B, D
Day 3  Touring in Plymouth Town
Your local guide conducts a sightseeing tour of the town of Plymouth today. See where Mobbamock, a Wampanoag priest who stayed with the colonists during the year had his home. Also see where the Pilgrims first began arranging their housing sites after disembarking the Mayflower in 1620. The famed first Thanksgiving was held nearby in 1621. Visit the National Monument to the Forefathers and tour the Pilgrim Hall Museum, the nation’s oldest continuously operating public museum with an unmatched collection of Pilgrim possessions. Meals: B, D
Day 4  Plimoth Plantation, Mayflower II and Clark’s Island
Start the day at Plimoth Plantation. This living history museum recreates the lives, experiences and concerns of Pilgrim live from the year 1627. Mingle with costumed interpreters and see live demonstrations of blacksmithing, farming and cooking along with the relationship to the Wampanoag people in the village. At the waterfront, see the famed Plymouth Rock along with a detailed replica of the colonists vessel the Mayflower II. Go aboard, meet the Pilgrims and see the sailing conditions from 1620. A cruise in Plymouth Bay show you Clark’s Island where the Pilgrims celebrated their first Sabbath in the New World. Back in Plimoth Plantation, a special Tribal Feast Dinner awaits. Meals: B, D
Day 5  Provincetown, Cape Cod and Thanksgiving
Journey to Provincetown where the Pilgrim’s first set foot and see the plaques commemorating the landing and the signing of the Mayflower Compact, the first governing document of the Plymouth Colony. The “First Encounter” marker commemorates Myles Standish’s meeting with the Wampanoags on December 8, 1620. While not a pleasant meeting, it did lead the Pilgrims to continue on to Plymouth where they settled. Tonight enjoy a traditional Thanksgiving dinner followed by a painting session of Delft tiles at the Plantation. Meals: B, D
Day 6  Martha’s Vineyard
For over ten thousand years the Wampanoag people have inhabited the island of Noepe, now called Martha’s Vineyard. Take the ferry to this resort island. Learn the history of the Wampanoag at the Aquinnah Cultural Center where exhibits on culture, whaling and artwork are on display. Visit the village of Edgartown with its gingerbread cottages and see the cliffs at Gays Head. Meals: B, D
Day 7  Travel Home
Say goodbye to the east coast with a group transfer to the Boston’s Logan Airport for flights out after 1:00 p.m. Meal: B 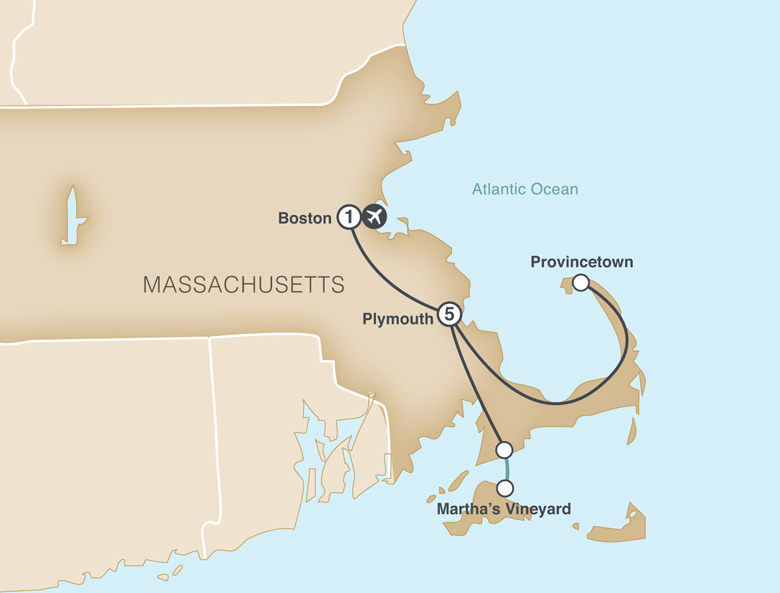 Dates and Rates
Rooms for the night before the tour are available. Cost for a room in Boston is $389, tax included.