Join us on an unforgettable musical journey to America’s Music Cities. From Nashville, the Home of the Country Music to Memphis, the Birthplace of the Blues and on to New Orleans with its deep Jazz Roots, you will be entertained and energized every step of the way.

Itinerary
Day 1  Arrive in Nashville, Tennessee
Arrive in Nashville, Music City USA and transfer to the glorious Gaylord Opryland Resort. Get to know the property on your own before meeting your traveling companions and Tour Manager in the lobby at 6:00 p.m. for a welcome dinner at the resort. Meal: D
Day 2  Nashville’s Country Music Hall of Fame and Grand Ole Opry
Begin your musical adventure with a narrated driving tour of Nashville. See the Honkey Tonks, Music Row, the historic Ryman Auditorium and even a full-scale replica of the Parthenon.

Visit the Country Music Hall of Fame and Museum. The museum is highlighted by its core exhibit Sing Me Back Home: A Journey Through Country Music. After time to freshen at the hotel you have reserved seats at the Granddaddy of Country shows, the Grand Ole Opry. Meal: B
Day 3  Studio B and The Memphis Sound
Get that Nashville feel at historic RCA Studio B. Once the recording home of popular music titans such as Elvis Presley, Chet Atkins and the Everly Brothers. It was here the “Nashville Sound” was born in the 1960’s and helped establish Nashville as an international recording center. Depart for Memphis where your first stop is at the Stax Museum of American Soul. The museum traces the roots of “Soulsville” the neighborhood once called home by the likes of Aretha Franklin, Memphis Slim and Booker T Jones.

Sun Studio is known as “The Birthplace of Rock’n’Roll” as musical legends from the 50s began here. Imagine standing on the very same spot where Elvis was first recorded. Then, enjoy some delicious Memphis cooking at Central BBQ. Meals: B, D
Day 4  Elvis Presley’s Graceland Mansion and Estate
Today is devoted to Elvis Presley’s Graceland. Tour the mansion, the heart of the 14-acre estate and see the living rooms, music room and “jungle” den. You will also see the meditation garden where “The King” is laid to rest. Also tour Elvis’ two custom airplanes, the Car Museum, The Entertainer Career Showcase Museum as well as the new state-of-the-art Visitor Entertainment Complex. Truly a day of musical history to remember. Meal: B
Day 5  Delta Blues Museum, Morgan Freeman’s Ground Zero and B.B. King
Travel south to the town of Clarksdale, located at the intersection of Highways 61 and 49 and known as “The Crossroads.” Clarksdale’s roots with the Blues culture dates back to the 1920s. At the Delta Blues Museum, learn how the Blues was born and grew up in the area thanks to musicians like Muddy Waters, John Lee Hooker, Sam Cooke and Ike Turner. They are dedicated to exploring the history and heritage of the unique American musical art form of the Blues.

Enjoy an included lunch at the unique Ground Zero Blues Club (owned by Morgan Freeman), established in 2001 to celebrate the area’s rich Blues heritage. At the B.B. King Museum trace the roots of Blues music from the cotton fields and juke joints through the life of the Blues’ foremost ambassador, Riley B.B. King. Meals: B, L
Day 6  Civil War Memories
This morning a licensed park guide leads you on a narrated tour of Vicksburg National Military Park. Learn about civilian life and military operations in the defense of Vicksburg in the spring and summer of 1863.

Continue south for a stop at majestic Oak Alley Plantation. This impressive “Big House” sits on twenty-five acres of history and romance. Enjoy a tasty Mint Julep and take in the immense “alley” of 300-year-old live oak trees. Later, arrive in New Orleans for a two-night stay.­­­ Meal: B
Day 7  New Orleans Sightseeing and Jazz Dinner Cruise
Begin the day with a narrated tour of New Orleans. See the sights such as the historic French Quarter, beautiful Garden District, colorful River Walk along the Mississippi and famous Bourbon Street. Enjoy free time on your own in the “Quarter” for lunch or maybe some beignets and coffee at Café du Monde before taking to the water for an exciting dinner cruise aboard the Paddlewheeler Creole Queen. Enjoy the sounds of traditional New Orleans Jazz music while dining on regional cuisine as it sails along the Mississippi River. Meals: B, D
Day 8  Travel Home
Following breakfast, a group transfer to the New Orleans International Airport is available for flights out after 11:00 a.m. Meal: B 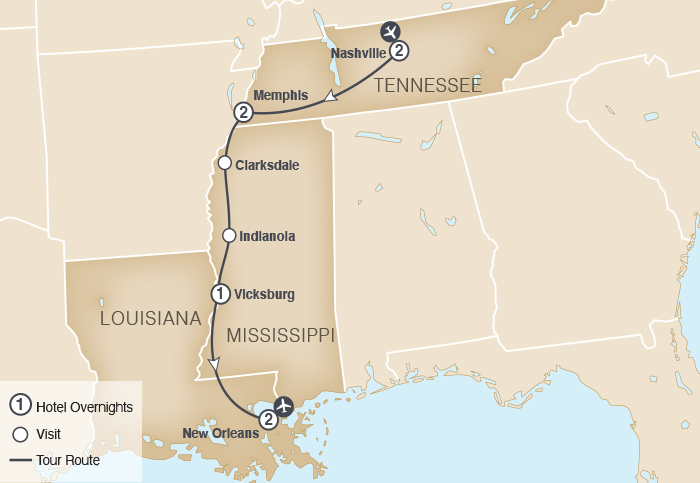