Itinerary
Day 1  Depart the USA
Depart the USA on your overnight flight to Munich, Germany, capital of Bavaria.
Day 2  Munich, Germany
Upon arrival in Munich, you will be met at the airport by a representative of Mayflower Cruises & Tours and assisted with the transfer to the hotel. The remainder of the day and evening are at leisure to begin exploring and attend the Oktoberfest activities.
Day 3  Munich
After breakfast, an included panoramic tour showcases the former Olympic site, Nymphenburg Palace, Maximilianstrasse and the Parliament, the National Theater and Munich’s Residenz. During a walking tour, stroll through Marienplatz Square and see the famous Glockenspiel. After the tour, the remainder of your time in Munich is at leisure. Meal: B
Day 4  Munich to Nuremberg, Germany
After breakfast, depart Munich by motorcoach for Nuremberg. After a brief orientation tour of Nuremberg, board your Emerald Waterways vessel, home for the next seven nights. Meals: B, D
Day 5  Regensburg, Germany
This morning takes you through the final stretch of the fascinating Main–Danube Canal to Regensburg, one of Germany’s best preserved medieval cities. On a guided walking tour, see one of the oldest bridges crossing the Danube and see the city’s architectural highlights including the Old Town Hall. Meals: B, L, D

Traditional Bavarian Band onboard
Day 6  Passau, Germany to Linz, Austria
Cobblestone streets and graceful arcades welcome you in the beautiful city of Passau. On this morning’s walking tour, stroll through the old town’s narrow alleyways and see the hilltop Oberhaus Fortress from the town below. Visit St. Stephen’s Cathedral, a wonderful example of Baroque architecture and home to Europe’s largest church organ with more than 17,000 pipes. The afternoon is spent cruising along the Danube River to Linz, where the Salzburg excursion guests re-embark. Meals: B, L, D

Tour to Salzburg (extra expense) Please note, you can only choose either the included tour of Passau or the DiscoverMORE option, as both tours operate at the same time.
Day 7  Melk to Dürnstein
Situated within Austria’s wine–growing region, Melk is home to an imposing 900–year old Benedictine Abbey featuring Austria’s finest Italian baroque architecture, with ornate gold-leaf walls, a 640 foot Imperial Corridor and fresco ceilings.

After visiting the Abbey, cruise along the Danube on a scenic journey through the picturesque landscape of the Wachau Valley en-route to Dürnstein. One of the most enchanting villages of the Wachau wine region, Dürnstein is also home to the ruins of the castle where Richard the Lionheart was imprisoned. Meals: B, L, D

A guided biking tour along the Danube River from Melk to Dürnstein or a guided hike to Dürnstein Castle
Day 8  Vienna, Austria
Welcome to Vienna, the capital of classical music. Today you have a choice of activities: Explore Austria’s capital with a drive along the Ringstrasse to see the impressive Opera House, Burgtheater and Town Hall, followed by a walking tour through the city center to see St. Stephen’s Cathedral and the Hofburg Imperial Palace. Or, if you feel more active, join the guided bike tour to Danube Island and Prater, Vienna’s large public park. Meals: B, L, D

Tastes of Vienna tour (extra expense)
Day 9  Bratislava, Slovakia
Set on the crossroads of ancient trade routes in the heart of Europe, Bratislava, the capital of Slovakia, embodies various cultures – primarily Celtic, Roman and Slavic. Enjoy a guided walking tour including the enchanting Old City with its Town Hall, Mirbach Palace, the Slovak National Theater and the Gothic Cathedral of St. Martin.

This afternoon, a highlight of the day will be a home-hosted visit where you are treated to tasty home-made specialties in the home of local Slovakians. What a unique opportunity to meet the locals and learn about life in Slovakia! This evening enjoy a gala dinner onboard. Meals: B, L, D

Hike to Bratislava Castle (this is instead of the city tour)

Emerald Home-Hosted Coffee and Cake with Slovakians
Day 10  Budapest, Hungary
Budapest is Eastern Europe’s liveliest and most cosmopolitan city. Enjoy a guided panoramic tour starting at the Citadella, continue down Andrássy Avenue and journey to Heroe’s Square to see the Seven Chieftains of the Magyars.

Or, choose an exciting hike to Buda Hill. This evening, enjoy a traditional Hungarian farewell dinner and complete the evening with a folk dancing and music performance onboard. The perfect nightcap is an evening cruise through the harbor, seeing the city illuminated in nighttime splendor. Meals: B, L, D

A guided hike to Buda Hill

Tour to Szentendre (extra expense)
Day 11  Budapest / USA
It’s time to say farewell to the Captain and crew as you depart on the transfer to the airport for your flight home. Meal: B 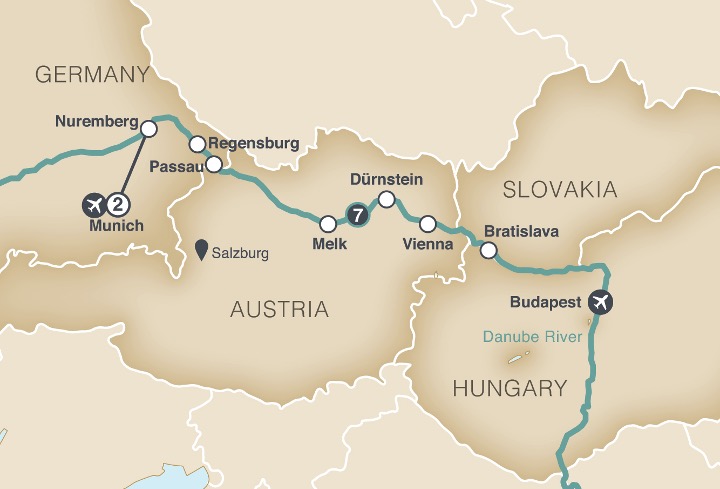