11 Days • 22 Meals
Five countries, all unique in their own way, line the Danube on its journey towards the furthest reaches of Eastern Europe. Your adventure begins with a two-night stay in the remarkable capital city of Bucharest, Romania. Taste Romanian wine on the banks of the river, visit the impressive cliff-top town of Veliko Tarnovo and attend a choir concert in Arbanasi. Take a guided tour of Belgrade before attending a Serbian folklore show onboard your ship. Enjoy lunch in the home of a local Croatian family in Osijek and visit a Puszta Horse Farm in Kalocsa, Hungary, for a performance showcasing the riding skills of the Magyar horsemen.

Itinerary
Day 1  Depart the USA
Depart the USA on your overnight flight to Bucharest, Romania.
Day 2  Bucharest, Romania
Upon arrival, you will be met at the airport and transferred to your hotel. The day is at leisure to begin discovering this historic city on your own.
Day 3  Bucharest
Begin the day with an included guided drive around the city showcasing Bucharest’s most iconic points of interest. See Union and University Squares, pass the impressive Triumph Arch, drive along the boulevards and admire the elegant Spring Palace before enjoying the remainder of the day at leisure. Meal: B
Day 4  Bucharest / Giurgiu, Romania
Spend the morning enjoying the surroundings of the hotel before the journey by motorcoach to Giurgiu where your Emerald Waterways vessel awaits. Meals: B, D
Day 5  Rousse, Bulgaria
This morning, depart the ship on an included excursion to the impressive cliff-top town of Veliko Tarnovo – described as the most beautiful Bulgarian city. This former capital of the Bulgarian empire was once known as the ‘City of the Tsars’ and remains largely unchanged from medieval times. Continue on to the historic town of Arbanasi, perched high on a plateau overlooking the Yantra River. Known for its 17th and 18th-century churches, a highlight of the visit may be the choir concert of acapella Orthodox chants. Upon returning to the ship, enjoy a welcome reception and dinner. Meals: B, L, D

Hike to Ivanovo Church
Day 6  Vidin, Bulgaria
A morning arrival brings you to Vidin in northwest Bulgaria. It is one of the oldest towns along the Bulgarian Danube, and prospers from its surrounding countryside, renowned for wine production. The day begins with an included tour of a vineyard and the opportunity to sample the local vintage.

Alternatively, embark on a hike to Belogradchik Fortress, also known as Kaleto, on the northern slopes of the Balkan Mountains. Initially used as a lookout point, it is believed to have been built by Romans, utilizing the already existing rocky landscape. Meals: B, L, D

Hike to Belogradchik Fortress
Day 7  Donji Milanovac – Golubac, Serbia / Iron Gates
Embark on an incredible journey to the archeological excavation site of Lepinski Vir. Located on the Danube in the Djerdap Gorge, near the town of Donji Milanovac, this Paleolithic site showcases a history spanning more than 8 millennia.

Archeologists have used this site to track the development of prehistoric culture in Europe and numerous Stone Age settlements have been found in the area. Reembark the ship in Golubac following the excursion and enjoy the rest of the day sailing along the Danube River. Meals: B, L, D
Day 8  Belgrade, Serbia
Today’s adventure begins with an included guided tour of Serbia’s vibrant capital including a visit to the Museum of Yugoslavia and Tito’s Memorial, the impressive Belgrade Fortress and St. Sava Church, the world’s largest orthodox cathedral. Enjoy an afternoon at leisure in port, or join an optional excursion to the National Opera Theatre for a backstage tour. After dinner, you’re in for a treat as a dance troupe comes aboard and performs a folklore show featuring dances from various parts of the country. Meals: B, L, D

Evening Serbian folklore show onboard
Day 9  Osijek, Croatia
After breakfast, depart for a tour of Osijek, the 4th largest city in Croatia. During a walking tour, visit the Tvrda (citadel) – a collection of Baroque buildings and an 18-century Habsburg star fort. Join local families for a home-hosted lunch, a truly memorable experience. Return to the ship for a final taste of Croatia with a farewell dinner onboard before departing for Hungary. Meals: B, L, D

Home-hosted lunch with a Croatian Family
Day 10  Kalocsa, Hungary
Early this morning, the ship arrives in Kalocsa, one of Hungary’s oldest towns and famous for the production of paprika. Visit a local Puszta Horse Farm during an included excursion.

Watch a performance showcasing the exceptional riding skills of Magyar horsemen and the ‘tricks’ of the horses themselves. Reboard the ship and enjoy your final afternoon onboard sailing to Budapest. Be sure to be on deck this evening as the ship arrives in Budapest to witness the beauty of the city aglow in nighttime splendor. Meals: B, L, D

Evening cruise of Budapest harbor
Day 11  Budapest / USA
Bid a fond farewell to Eastern Europe as you depart on the transfer to the airport and return home with memories of your cruise along the lower Danube River. Meal: B 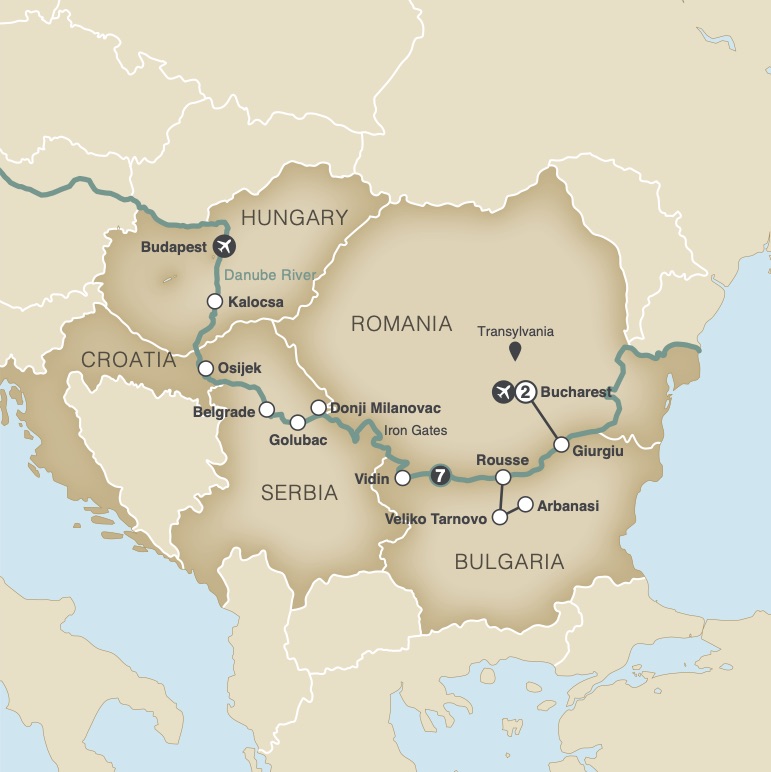