11 Days • 21 Meals
Experience the Danube River aboard an Emerald Waterways Star-Ship on a seven-night cruise through four countries. Includes two nights in Prague and escorted shore excursions with English-speaking guides in six cities.

Itinerary
Day 1  Depart the USA
Depart the USA on your overnight flight to Budapest, Hungary.
Day 2  Budapest, Hungary
Welcome to the “Pearl of the Danube”. You will be met at the airport and transferred to the luxurious surrounds of your Emerald Waterways Star-Ship, where your friendly captain and crew will be waiting to welcome you.

This evening, join your fellow guests for a folklore performance onboard and a traditional Hungarian dinner. A nighttime cruise along the Danube showcases the illuminated façades of some of the capital’s most illustrious buildings, including the magnificent domed Parliament. Relax on the Sun Deck and enjoy the fabulous view of the city, aglow in nighttime splendor. Meal: D

An evening cruise through Budapest harbor
Day 3  Budapest, Hungary
Explore Budapest’s cobbled medieval quarter today, as you embark on a coach tour through the UNESCO World Heritage-listed city center. Your guide will highlight a number of architectural wonders from across the ages, enabling you to follow a journey from Budapest’s Roman beginnings to the addition of ornate Romanesque and Baroque architecture in the centuries that followed.

If you are feeling more active, you may instead choose to hike to Buda Hill. The surrounding area has been rebuilt several times, most recently following the air raids of WWII. Some 18th-century Baroque houses still stand, best explored by foot along the medieval paths and alleyways in the area around Buda Castle. Meals: B, L, D

A guided tour of Budapest

Guided hike to Buda Hill
Day 4  Bratislava, Slovakia
Relax on board as we sail into the capital of Slovakia this morning. This graceful nation of leafy avenues became an independent country in 1993, and since then, Bratislava has flourished as a new capital and made a name for itself as a cultural center where different styles of music are as readily celebrated as the region’s medieval past. The romantic cobblestone lanes that weave through the city are explored with your local guide, as you enjoy a walking tour of the ancient town center, seeing the Slovak National Theatre and a range of Gothic and Art Nouveau buildings. Alternatively, embark on a guided hike to Bratislava Castle, a landmark steeped in legends that looks as though it came from the pages of a fairytale book. Meals: B, L, D

A guided walking tour of Bratislava

A guided hike to Bratislava Castle
Day 5  Vienna, Austria
Sweeping boulevards and world-famous art exhibitions welcome you to Vienna, the birthplace of revolutionary breakthroughs in the fields of music and psychology. The city perfectly encapsulates the opulence of the Habsburg Monarchy and their ornate Baroque palaces. On the included city tour, see monuments and buildings of grandeur as the coach drives along the famous Ringstrasse. During the walking tour, stroll with your guide through the city center, a UNESCO World Heritage Site. Marvel at the classical architectural styles of the buildings, see St. Stephen’s Cathedral and the Hofburg Palace, right in the middle of the city center.

If you are feeling more active, opt to explore on two wheels, cycling along the river to Danube Island before reaching the Prater and its nostalgic 19th-century Ferris wheel. Meals: B, L, D

An exclusive Viennese evening concert with the music of Mozart and Strauss (additional expense)
Day 6  Dürnstein – Melk, Austria
Effortlessly suspended in time, Dürnstein is one of the most frequented parts of the Wachau wine region, where the weather creates the perfect setting for viticulture. Today, you can choose to hike to the ruins of Dürnstein Castle, where a delightful panoramic view of the surrounding medieval villages, rows of vines in beautifully arranged vineyards and a forested backdrop is certain to please.

Later, sail through the UNESCO World Heritage-listed Wachau Valley, passing medieval villages, terraced vineyards and areas of natural beauty. Upon arrival in Melk, enjoy a guided tour of Melk Abbey, originally a lavish castle that was gifted to Benedictine monks during the 11th-century. This opulent Baroque building is home to some of the most important collections of medieval manuscripts in the world. Meals: B, L, D

A tour of Melk Abbey

A guided hike to Dürnstein Castle

A guided bike ride along the Danube
Day 7  Linz – Ceský Krumlov, Czech Republic
From your docking site in Linz, depart via coach to the UNESCO World Heritage-listed center of Ceský Krumlov, a town built around a 13th-century castle. Join your local guide to traverse a labyrinth of winding cobblestone streets, passing the colourful façades of buildings that highlight different time periods. Learn how they survived the test of time thanks to the regions’ peaceful past. The town surrounds the national heritage site, Ceský Krumlov Castle, and your guided tour will include the 15th-century St. Vitus’ Church and a number of High Gothic façades. Meals: B, D

A guided tour of Ceský Krumlov
Day 8  Passau, Germany
Narrow cobblestone streets welcome you to Passau, a town nestled on the confluence of three of Europe’s main waterways. This important historic trading center borders Austria and Croatia, and a distinctive blend of cultures can be found here.

Your local guide will take you on a walking tour of the town, touching on its distinctive historic buildings. See the Baroque St. Stephen’s Cathedral with its ornate columns and arches and the Altes Rathaus, or Town Hall, a collection of eight historic patrician houses built between the 14th and 15th centuries. Meals: B, L, D

A guided tour of Passau

A guided hike near Passau

A Bavarian beer tour (additional expense)
Day 9  Prague, Czech Republic
After breakfast, say goodbye to your Captain and crew as you disembark the ship and depart by motorcoach for Prague, Czech Republic. Upon arrival, after time for lunch on your own, enjoy the included city tour, highlighting the famous sites of this beautiful city.

Following a brief panoramic drive, the heart of the city is discovered on foot. See Old Town Square with its historic astronomical clock, and the medieval Charles Bridge. The tour concludes at the hotel with the evening at leisure. Meal: B
Day 10  Prague, Czech Republic
The final is day is left free of planned activities for your independent exploration of Prague. Or, if you choose, join the morning optional excursion to Terezin Concentration Camp. Meal: B
Day 11  Prague/ USA
Bid a fond farewell to Europe and return home with wonderful memories of life enriching experiences from your cruise along the Danube River. Meal: B 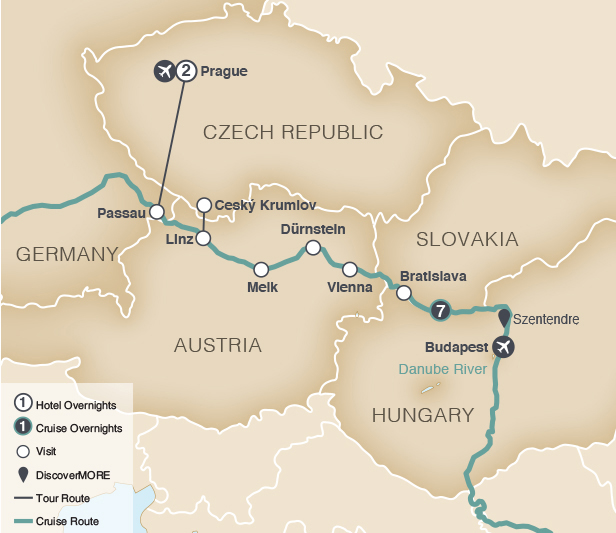