11 Days • 23 Meals
Discover the scenery and history along the lower Danube River as you sail aboard our exclusively chartered ship. Travel through five countries of Eastern Europe and discover their history, culture and beauty.

Itinerary
Day 1  Depart the USA
Depart the USA on your overnight flight to Budapest, Hungary.
Day 2  Budapest, Hungary
Upon arrival, transfer to your exclusively chartered river ship, the MS Emerald Sun. The day is at leisure to begin discovering your new surroundings and become acquainted with the amenities of the ship. Meal: D
Day 3  Kalocsa, Hungary
Early this morning, the ship departs Budapest. Enjoy a relaxing morning sailing along the river to Kalocsa, one of Hungary’s oldest towns and famous for the production of paprika. Following lunch onboard, visit a local Puszta Horse Farm during an included excursion. Watch a performance showcasing the exceptional riding skills of Magyar horsemen and the ‘tricks’ of the horses themselves. Meals: B, L, D
Day 4  Osijek, Croatia
The ship arrives in Osijek, Croatia, early this morning. After breakfast, depart for an included excursion of the city – 4th largest in Croatia. During a panoramic tour, see buildings that have been restored to their former glory while also witnessing the scars of conflict as others still display bullet holes and shrapnel marks. During a walking tour, visit the Tvrda (citadel) – a collection of Baroque buildings and an 18-century Habsburg star fort. For a truly life enriching experience, you’ll visit a school and meet the children, before heading into the villages for a homehosted lunch with local families. Return to the ship for a final taste of Croatia with tamburica entertainment onboard before departing for Serbia. Meals: B, L, D
Day 5  Belgrade, Serbia
Today’s adventure begins with an included guided tour of Serbia’s vibrant capital including a visit to Tito’s Memorial, the impressive Fortress Kalemegdan and St. Sava Church, the world’s largest orthodox cathedral. Enjoy an afternoon at leisure in port, or join an optional excursion to the National Opera Theatre for a backstage tour. After dinner, you’re in for a treat as a dance troupe comes aboard and performs a folklore show featuring dances from various parts of the country. Meals: B, L, D
Day 6  Kostolac, Serbia / Iron Gates
The day begins as you embark on an incredible journey to Viminacium – the first and largest archaeological excavation in Eastern Europe. As one of the most important Roman cities and military camps from the 1st – 4th centuries, findings include a 12,000-seat amphitheater, a cemetery, graves with impressive frescoes, animal remains of bear, camel and mammoth, and numerous art and jewelry treasures. Early this afternoon, the ship departs for a leisurely day sailing along the Danube River. Be sure to be on deck as you sail through the Iron Gates – the narrow gorge between the European Alps and Carpathian Mountains, boasting spectacular scenery. Meals: B, L, D
Day 7  Vidin, Bulgaria
As you awaken, Vidin, the most eastern town in Bulgaria, awaits your discovery. Depart for the included tour where a visit to Baba Vida Fortress is in store. With three fully preserved towers and the original battlements, this is one of the few entirely preserved medieval fortresses in Bulgaria. The area is also known for wine making and you sample the local vintage during a visit to Port Cetate. Meals: B, L, D
Day 8  Rousse, Bulgaria
After arrival in Rousse, depart the ship on an included excursion to the impressive cliff-top town of Veliko Tarnovo. This former capital of the Bulgarian empire was once known as the ‘city of the Tsars’ and remains largely unchanged from medieval times. Continue on to the historic town of Arbanasi, perched high on a plateau overlooking the Yantra River. Known for its 17th and 18th-century churches, a highlight of the visit may be the choir concert of acapella Orthodox chants. Return to the ship in Rousse for an afternoon at leisure. Meals: B, L, D
Day 9  Giurgiu / Bucharest, Romania
This morning, disembark the ship in Giurgiu and journey by coach to Romania’s capital, Bucharest. Upon arrival, an included tour showcases the highlights of the city. See Union and University Squares, pass the impressive Triumph Arch and drive along the longest boulevard of the city. Admire the Royal Palace in Revolution Square and walk through the Old Town before arriving at the hotel for a two-night stay. Meal: B
Day 10  Transylvania
The final adventure of your journey through Eastern Europe is an included visit to Transylvania and Bran (Dracula’s) castle. Travel through the scenic Carpathian Mountains, visit the Monastery Sinaia and enjoy an included lunch enroute. At the castle, hear the legends of the infamous Count and decide for yourself! Meal: B, L
Day 11  Bucharest / USA
Bid a fond farewell to Eastern Europe and return home with memories of life enriching experiences. Meal: B 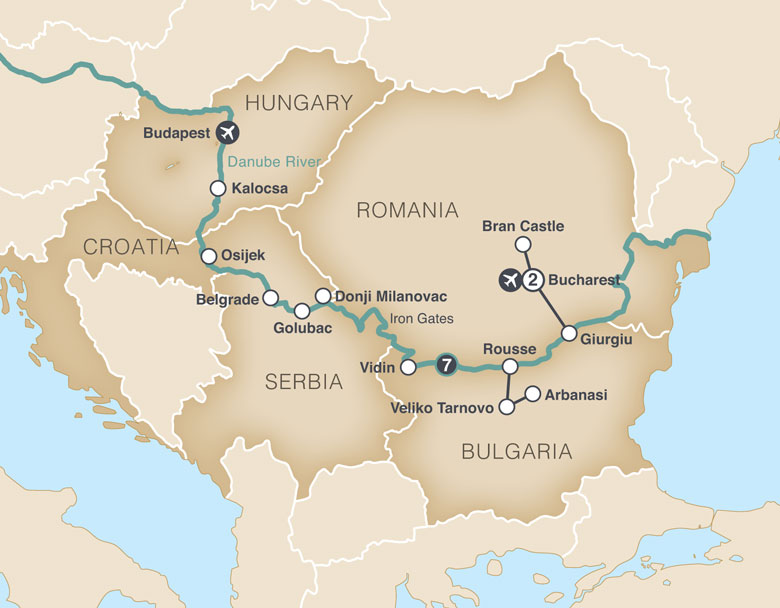 Save up to Free Airfare on 2020 Departures
from $4,449 per person
Travel Resources