Itinerary
Day 1  Arrive in South Carolina
Welcome to beautiful Charleston, South Carolina with a transfer to your hotel. Tonight, get to know your Tour Manager and fellow traveling companions during a welcome dinner at 6:00 p.m. in the hotel. Meal: D
Day 2  The Charm of Charleston and Boone Hall Plantation
Through the stories of those who founded Charleston, the local guide makes history come alive along these antebellum homelined streets. See the Old Market and Exchange and the famous “Battery at the Harbor,” which overlooks Fort Sumter. At Boone Hall Plantation enjoy a taste of the Old South with a traditional Low Country Plantation lunch before a tour of the grounds.

One of America’s oldest working plantations, Boone Hall has been continually growing crops for over 320 years and is listed on the National Register of Historic Places. Meals: B, L
Day 3  Beaufort and Jekyll Island
Depart Charleston for one of Georgia’s “Golden Isles’” Jekyll Island. En route, a stop is made at charming Beaufort, one of only a handful of towns in the nation that has had its entire downtown designated an historic district by the National Trust for Historic Preservation.

Beaufort is known for its southern hospitality, scenic waterfront charm, quaint shops and historic homes. Later, arrive at the romantic Victorian-style Jekyll Island Club Hotel, originally built as an exclusive island getaway for the Rockefeller and Vanderbilt families. Meal: B
Day 4  Jekyll Island and the Golden Isles
Begin the day with a narrated tram tour of Jekyll Island’s National Landmark Historic District and hear the fascinating stories of the island’s beginnings and development by the “rich and famous” of the late 1800s. In the afternoon, visit the largest of the Golden Isles, St. Simons, where Spanish moss-draped oaks line the island’s charming streets.

See St. Simons Lighthouse, in operation since 1872, and Bloody Marsh, where British and Scottish soldiers defeated the Spanish. The balance of the day is free to relax and enjoy the natural beauty of the Jekyll Island Club. Meals: B, D
Day 5  Savannah
Travel to Savannah, the “Belle of the South” and discover why General Sherman found this city much too beautiful to burn during the Civil War. On a narrated trolley tour your driver guide recounts the tales and secrets of the stately mansions of the lovely squares of Savannah’s Historic District. Pass the 1820 birthplace of Juliette Gordon Low, founder of the Girl Scouts, the squares and streets where movies such as Forrest Gump and Midnight in the Garden of Good and Evil were filmed. Meals: B, D
Day 6  Tybee Island and Free Time in Savannah
This morning it’s off to Tybee Island to visit the lighthouse that has been the guardian of the Savannah River since 1736. Visit the museum that features exhibits of early life on the island, and if you are feeling adventurous, take the exhilarating walk up the 154-foottall lighthouse.

Later, feel free to discover the many shops along River Street and enjoy the beauty of the quaint squares perfect for relaxing. Tonight, dinner is served family-style at Mrs. Wilkes’ Boarding House, a Savannah legend. Meals: B, D
Day 7  Home
Bid a fond farewell to Savannah and leave with wonderful memories of the South’s most beautiful cities. Meal: B 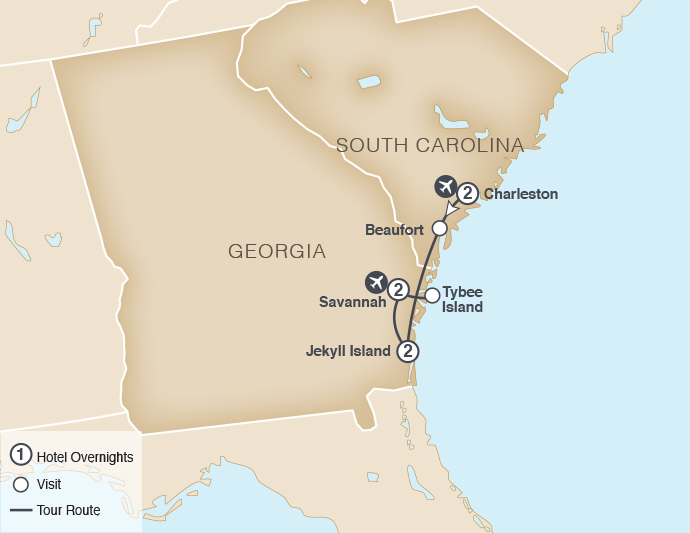 Dates and Rates
Rooms for the night before and after the tour are available. Cost for a room in Charleston is $349 and in Savannah is $289, tax included.