Join the annual celebration of the gift of beautiful cherry trees from the people of Japan to the people of the United States. Then tour Washington, DC, Colonial Williamsburg and Arlington National Cemetery.

Itinerary
Day 1  Arrive in Washington, DC
Your tour begins with an included transfer from Washington Reagan National Airport and a welcome dinner at 6:00 p.m. hosted by your Tour Manager. Meal: D
Day 2  National Cherry Blossom Parade and Mount Vernon
Enjoy the beauty and aroma of blossoming cherry trees as we view the National Cherry Blossom Parade from reserved seats. Marching down Constitution Avenue, the parade showcases floats, helium balloons, international performance groups and some of the country’s finest marching bands. No tour of colonial America is complete without a stop at Mount Vernon, the expansive estate of George and Martha Washington.

Visit the new Ford Orientation Center and the Donald W. Reynolds Museum where you will have the chance to experience Washington's life through movies and exhibitions. Explore his mansion filled with 18th-century treasures and stroll the gardens of this 45-acre estate, taking in the views of the Potomac River from the mansion’s piazza. Meals: B
Day 3  Arlington National Cemetery and Washington, DC Touring
Sightseeing in your nation’s capital includes Arlington National Cemetery* and the John F. Kennedy Memorial. See the Changing of the Guard at the Tomb of the Unknown Soldier. In the mall area see the FDR, Vietnam and Lincoln Memorials along with the National WWII Memorial. After dinner an Illumination tour of Washington, DC’s mall area highlights the nation’s monuments and memorials bathed in light. Meals: B, D
Day 4  Ford’s Theatre, Petersen House and Smithsonian’s Museum of American History
Begin the day at Ford’s Theatre where on April 14, 1865 President Abraham Lincoln was assassinated by John Wilkes Booth. See the one act play One Destiny which recounts the evening’s events before visiting Petersen House, the boarding house where Lincoln died.

Later, enjoy time to visit the Smithsonian Institution, the world’s largest museum complex and research organization and composed of 16 museums in Washington, DC. The American History Museum’s collection contains more than three million historical objects including the famed Star-Spangled Banner as well as documents which explore the evolution of the American identity. Meal: B
Day 5  Jamestown Settlement and American Revolution Museum at Yorktown
At Jamestown Settlement, the site of America’s first permanent English colony, explore life at the dawn of the 17th-century inside the palisade of a re-created colonial fort. Also discover the world of Pocahontas in the Powhatan Indian Village. At the American Revolution Museum at Yorktown learn about the Revolution that led to the establishment of a new nation almost two centuries later. Meal: B
Day 6  Colonial Williamsburg
In Colonial Williamsburg, stroll streets dating back to the 1700s. Converse with residents playing the roles of their ancestors of more than 200 years ago. Tonight, enjoy a traditional Colonial tavern dinner in Williamsburg. Meals: B, D
Day 7  Washington, DC and Home
Travel Washington, DC on a group transfer to Washington Reagan National Airport for flights out after 2:00 p.m. Meal: B 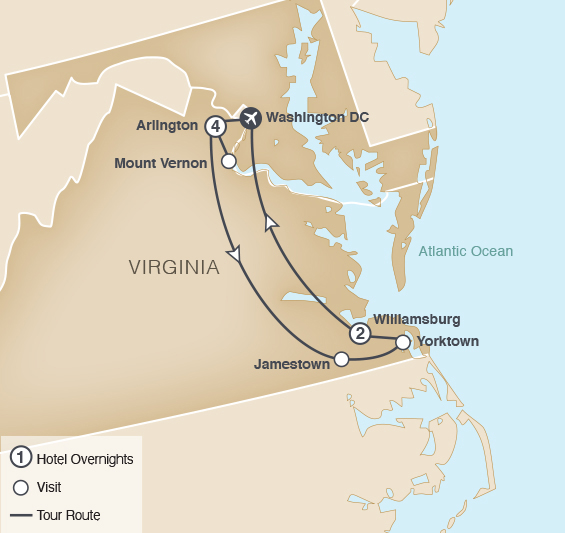 Dates and Rates
Rooms for the before and after the tour are available. Cost for a room in Arlington is $349, tax included.