Get ready for the adventure of a lifetime — a safari across two African countries! Experience elephants, giraffes, wildebeests, rhinos, and other animals you've only seen in zoos or on TV in their natural habitats.

Itinerary
Day 1  Depart the USA
Depart the USA on your overnight flight to Nairobi, the capital and largest city of Kenya.
Day 2  Nairobi, Kenya
JAMBO - KARIBU!! (Welcome!) Upon arrival at the Jomo Kenyatta International Airport, you will be met by a Mayflower Cruises & Tours representative who will assist with your transfer to the hotel, located in the heart of the central business district, for overnight accommodations.
Day 3  Nairobi to Amboseli National Park
After breakfast, depart for the drive to Amboseli National Park. Check in to the lodge and enjoy time for lunch. This afternoon, the safari adventure begins with the first game-viewing drive to Amboseli National Park. You’ll have the opportunity to see buffalo, cheetah, giraffe, baboon, gazelle, hippo and wildebeest among many other inhabitants of this national park. With over 400 species of birds, flora and fauna, it’s also a bird-lover’s paradise. This evening, enjoy dinner at the lodge. Meals: B, L, D
Day 4  Amboseli National Park
Morning and afternoon game-viewing drives are in store for today. Amboseli National Park offers some of the most breathtaking views in Africa and is one of the best places for a photogenic view of Mount Kilimanjaro (weather permitting). Famous for its large herds of giant elephants, the park provides the classic Hollywood image of Africa. Meals: B, L, D
Day 5  Amboseli National Park to Tarangire National Park
Enjoy an early morning breakfast before departing via the Namanga border to Tarangire National Park where you check in to the lodge and enjoy a late lunch.

It's the greatest concentration of wildlife outside the Serengeti ecosystem - a smorgasbord for predators – and the one place in Tanzania where dry-country antelope, such as the stately fringe-eared oryx and peculiar long-necked gerenuk, are regularly observed. Meals: B, L, D
Day 6  Tarangire National Park to Ngorongoro Conservation Area
After breakfast, depart for the Ngorongoro Conservation Area. Lunch will be provided after checking in to the lodge on the rim of Ngorongoro Crater, which has the largest unbroken caldera in the world and has been described as one of the great natural wonders of the world. Almost every species of African plains mammal lives in the crater, including the endangered black rhino. This afternoon, relax and enjoy the breathtaking views from the lodge before tonight’s dinner. Meals: B, L, D
Day 7  Ngorongoro Conservation Area
Today’s adventure is a descent into the crater in the game-drive vehicles, for a full day of game viewing. A photogenic paradise, an abundance of resident wildlife freely roams the plains of the crater floor while hundreds of bird species refresh in the small lakes. Unmatched for its natural variety and breathtaking beauty, there are few places on earth where such a tremendous diversity of landscape exists in an area of this size. The crater is also of great archaeological importance with the remains of some of mankind’s earliest ancestors discovered in the area. Return to your lodge in the late afternoon with time to relax before dinner. Meals: B, L, D
Day 8  Ngorongoro Conservation Area to Serengeti National Park
After breakfast, depart for Serengeti National Park with a stop at Olduvai Gorge en-route. As one of the most important prehistoric sites in the world, a resident guide will provide an interpretation of the gorge. Lunch will be provided after checking in to the lodge.

This afternoon, participate in a game-viewing drive in the world-famous Serengeti National Park. Covering 5700 square miles, it is Tanzania’s oldest park and one of the world’s last great wildlife refuges. The Serengeti ecosystem supports the greatest remaining concentration of plains game in Africa, including more than 2,500 lions and over one million wildebeests. After the game-viewing drive, return to your Serengeti lodge for dinner. Meals: B, L, D
Day 9  Serengeti National Park
After breakfast, depart with picnic lunch boxes for a full day of game-viewing drives on the Serengeti plains. ‘Serengeti’ is derived from a word meaning ‘the place where the land runs on forever,’ and the vast national park remains true to its name.

Aside from being spoiled by the variety of wildlife and bird species of the Serengeti, its landscape is stunningly beautiful, especially in the early morning and late evening light. Elephant, buffalo, lion, rhino, zebra, giraffe and others may be spotted during your Serengeti adventure. Meals: B, L, D
Day 10  Serengeti National Park to Masai Mara Game Reserve
It’s time to leave Tanzania and travel to Kenya via the Sirari/Isebania border where your driver/guides will assist with the immigration procedures. During the drive to the Masai Mara Game Reserve, a picnic lunch will take place.

With rolling plains and grasslands stretching as far as the eye can see, the Masai Mara is home to the black-maned lion, Savannah (African) elephant, Cape buffalo, wildebeests, cheetah, hyena, rhino, topi, Burchelle’s zebra and Masai giraffe. Arrive at the intimate Tipilikwani Camp in the evening, check-in to your accommodations and enjoy dinner. Meals: B, L, D
Day 11  Masai Mara Game Reserve
If you choose, start the day with an optional sunrise hot-air balloon ride* (weather permitting). After breakfast, depart on a full-day adventure on the Masai Mara Game Reserve as you keep a lookout for the “big five”: lion, Savannah elephant, Cape buffalo, leopard and the black rhino.

In the afternoon, visit a traditional Maasai manyatta (village) and experience the culture of this world-famous community where the Maasai still live as they have for centuries. Interact with these nomadic people and experience their way of life. Return to the camp for dinner and overnight. Meals: B, L, D
Day 12  Masai Mara Game Reserve to Lake Nakuru National Park
After breakfast, depart for Lake Nakuru National Park, arriving in time for lunch at the Mbweha Safari Camp. Afterwards, participate in an afternoon game-viewing drive. Lake Nakuru is home to prides of lion, Cape buffalo, waterbucks, wart hogs, the endangered Rothschild giraffe, black & white rhino, Burchell’s zebra, impalas and the elusive leopard. After the safari, return to the lodge for dinner and overnight. Meals: B, L, D
Day 13  Lake Nakuru National Park to Nairobi
Your African Safari Adventure comes to an end as you depart for a visit to the Rift Valley before continuing on to Nairobi. Lunch is included before arriving at the Jomo Kenyatta International Airport for your flight home. Depart the African continent with memories and photographs of the special moments and unforgettable experiences. Meals: B, L 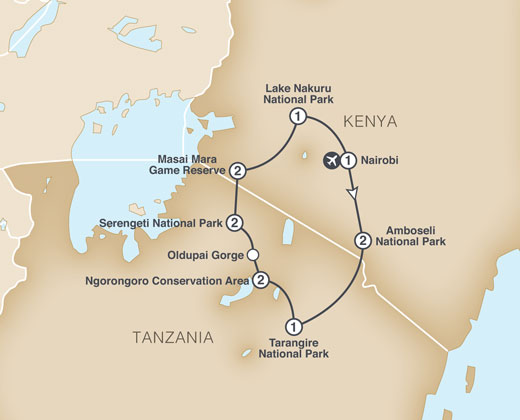 Dates and Rates
*Sunrise Hot-Air Balloon Safari over the Serengeti (May): $695 per person

Passport & Visas: Each U.S. citizen must have a valid passport. Expiry date of passports should be at least 6 months after the return date of tour. If you don’t have a passport, call our office and we’ll tell you how to apply for one. Some countries require visas for entry by U.S. citizens. We will send visa applications and instructions if a visa is required for your tour. Holders of non-U.S. passports should contact their nearest consulate and inquire about the necessary passport or visa documentation required for entry into the countries visited.