12 Days • 20 Meals
River Cruise
Experience the spectacle that 3,000 years of Chinese history has produced. Explore the Great Wall of China, the imperial Forbidden City, the Three Gorges Dam and a wonderful cruise on the Yangtze River.

Itinerary
Day 1  Depart the USA
Depart the USA on your transpacific flight to Beijing, China, the capital of the Peoples’ Republic of China.
Day 2  Beijing, China
Upon arrival in Beijing you’ll be met by a Mayflower representative and transferred to your hotel. The remainder of the day is at leisure.
Day 3  Temple of Heaven and Tiananmen Square
Discover Beijing, the heart, soul and spirit of this mysterious and mystical land. Visit the Temple of Heaven, a masterpiece of 15th-century architecture, where the emperors came to pray for good harvests. Its grand architectural style and profound cultural connotation give an insight into the practices of the ancient Eastern civilization. Learn the art of Taiji Boxing from a Chinese Master. Marvel at Tiananmen Square, the largest public square in the world and home to Chairman Mao’s Memorial. After time for lunch, an included pedicab ride takes you on a visit of an old Beijing Hutong (neighborhood). This evening, enjoy a welcome dinner of Peking duck, a local specialty. Meals: B, D
Day 4  Great Wall of China
Today’s excursion journeys to the Great Wall of China, one of the ‘Eight Wonders of the World’ and a UNESCO World Heritage Site. Ascend via cable car for a rewarding breathtaking view. The amazing wall, complete with ramparts, watchtowers and the infamous zigzag shape, meanders across hills and valleys and fades away into the distance. Enjoy an included lunch during the excursion. Meals: B, L
Day 5  Forbidden City and Xian
Before departing Beijing, walk through the echoing courtyards and monumental palaces of the Forbidden City, once home to China’s ruling emperors during the Ming and Qing Dynasties. This afternoon transfer to the rail station to board the bullet train to Xian. Sit back and relax as you experience high-speed train travel through China! Upon arrival in Xian, you’ll be transferred to the hotel for an evening at leisure. Meal: B
Day 6  Terra Cotta warriors
This morning, travel to the spectacular sight of the tomb of Emperor Qin Shi Huang, guarded by 8,000 life-size Terra Cotta warriors and horses, in battle formation. Another UNESCO World Heritage Site, it’s one of the most significant archeological excavations of the 20th century. After an included lunch, the remainder of the day is at leisure. Meal: B, L
Day 7  Chongqing and embarkation of the RV Century Sun
Board a morning flight to Chongqing, the former capital during WWII. During the city tour, visit the Grand Auditorium and General Stilwell’s Museum, founded in memory of this American General who contributed a great deal to the people of China. After the tour, enjoy dinner ashore before embarking the RV Century Sun, home for the next three nights. Meal: B, D
Day 8  Shibaozhai Pagoda
Enjoy the scenic sailing on the Yangtze River this morning. This afternoon’s shore excursion to Shibaozhai Pagoda is included. Join the Captain’s welcome party this evening followed by dinner. Meals: B, L, D
Day 9  Qutang and Wu Gorges
This morning cruise the Qutang Gorge, which is five miles long and the narrowest, most dramatic of all gorges. The mountains on either side reach as high as 4,000 feet. This combination of narrow canyons among high mountains is often considered the most beautiful of all the Three Gorges. In the afternoon, sail through the Wu Gorge followed by an included excursion to Shenny Stream. Enjoy the Captain’s farewell dinner on your final evening aboard the ship. Meals: B, L, D
Day 10  Maoping, Three Gorges Dam and Shanghai
After an early morning arrival in Maoping, depart for the Three Gorges Dam. Spanning the Yangtze River, it is the largest hydroelectric river dam in the world. After the shore excursion, sail through the scenic Xiling Gorge and arrive in Yichang where you disembark and transfer to the airport for your flight to Shanghai. Meals: B, L
Day 11  Shanghai
Begin the day by exploring Shanghai with a city tour that takes you to the waterfront known as ‘The Bund’, the 16th century Yu Garden, French Concession and the Pudong area. Tonight enjoy a farewell dinner, Chinese style, at your hotel. Meals: B, D
Day 12  Shanghai/USA
This morning, transfer to the Shanghai airport. Return home with fond memories of the life enriching experiences from China and your cruise on the Yangtze River. Meal: B 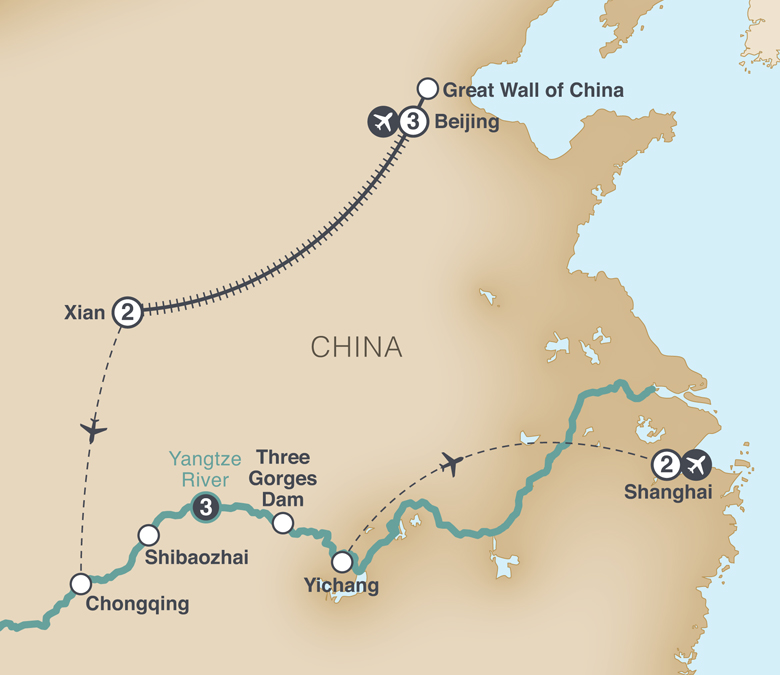 Dates and Rates
Please note additional cost for domestic flights within China is $400 per person and will be booked through Mayflower Cruises & Tours. Taxes are subject to change. Above rates are based on a Deluxe Cabin on the Bridge Deck. Upgrade to other decks, Junior Suite and Executive Suite available upon request at additional cost. Each U.S. citizen must have a valid passport. Expiry date of passports should be at least 6 months after the return date of tour. If you don’t have a passport, call our office and we’ll tell you how to apply for one. Some countries require visas for entry by U.S. citizens. We will send visa applications and instructions if a visa is required for your tour. Holders of non-U.S. passports should contact their nearest consulate and inquire about the necessary passport or visa documentation required for entry into the countries visited. NOTE: Due to airline security measures, your passport name must match your airline ticket name and your tour reservation name or you may be denied aircraft boarding.

from $2,599 per person
Travel Resources