11 Days • 22 Meals
Experience the Danube River aboard a luxurious Emerald Waterways Star-Ship on a seven-night cruise through four countries. Begin the adventure with an included two-night stay and touring in Prague before embarking the ship in Nuremberg, Germany.

Itinerary
Day 1  Depart the USA
Depart the USA on your overnight flight to Budapest, Hungary.
Day 2  Budapest, Hungary
Upon arrival, you will be met and transferred from the airport to your Emerald Waterways luxury river cruise ship. After boarding, enjoy some time at your leisure to explore Budapest. This evening, join your fellow travelers with a traditional Hungarian welcome dinner. Later, enjoy Hungarian folk dancing and music with a special performance onboard. Meal: D

Traditional Hungarian Folklore Show
Day 3  Budapest
Today’s included tour presents you with a fantastic opportunity to become acquainted with Hungary’s beautiful capital Budapest, Eastern Europe’s liveliest and most cosmopolitan city. Enjoy a guided tour of the city as you journey along the UNESCO World Heritage-Listed Andrássy Avenue, see Heroes’ Square and explore the Castle District. Or enjoy a hike to Buda Hill for an impressive view over the Danube. The cruise begins with a leisurely afternoon onboard as the ship departs for Bratislava. This evening, the Captain welcomes you with a reception, followed by a Gala Dinner. Meals: B, L, D

Tour to Szentendre (additional expense)
Day 4  Bratislava, Slovakia
This morning, relax onboard as the ship sails into Bratislava. The day begins with an included walking tour of Bratislava, the capital of Slovakia. Set on the crossroads of ancient trade routes in the heart of Europe, Bratislava embodies various cultures. See the enchanting Old City with its Town Hall, the neo-Renaissance façade of the Slovak National Theater, and the Gothic Cathedral of St. Martin. Or the active travelers can choose to go on a guided hike to Bratislava Castle.

After lunch onboard, a highlight of the day will be a home-hosted visit where you are treated to tasty home-made specialties in the home of local Slovakians. What a unique opportunity to meet the locals and learn about life in Slovakia. Meals: B, L, D

Home-Hosted Coffee and Cake with a Slovakian family
Day 5  Vienna, Austria
Welcome to Vienna, the capital of classic music. Today you have a choice for exploring Austria’s capital: drive along the Ringstrasse to see the impressive Opera House, Burgtheater and Town Hall, followed by a stroll through the UNESCO World Heritage-Listed historic city center to see St. Stephen’s Cathedral and the Hofburg Imperial Palace. Or, discover the city on two wheels during a guided bike tour. Meals: B, L, D

Exclusive Viennese concert with music from Mozart and Strauss (additional expense)
Day 6  Dürnstein – Melk
Awaken this morning in the medieval town of Dürnstein, where you have free time to enjoy one of the most enchanting villages of the Wachau wine region. The ruins of Dürnstein Castle, which served as a prison to England’s Richard the Lionheart, can be seen on the hilltop. Enjoy the breathtaking scenery of the Wachau Valley while cruising along the Danube to Melk.

Or enjoy a guided bike ride between Dürnstein and Melk. On an included excursion, visit the magnificent 900-year-old Benedictine Abbey, a UNESCO World Heritage Site, which boasts an opulent Baroque interior. Meals: B, L, D

Guided bike tour along the Danube River from Dürnstein to Melk
Day 7  Passau, Germany
Following a leisurely morning sailing along the Danube, cobblestone streets and graceful arcades welcome you to Passau. On an included walking tour, stroll through the old town’s narrow alleyways and see the hilltop Oberhaus Fortress from the town below. St. Stephen’s Cathedral is a wonderful example of Baroque architecture and home to Europe’s largest church organ with more than 17,000 pipes. This afternoon, depart for Regensburg. Meals: B, L, D

Hike to Veste Oberhaus
Day 8  Regensburg
This morning takes you through the final stretch of the fascinating Main-Danube Canal to Regensburg, one of Germany’s best preserved medieval cities. Explore the city on a guided walking tour, seeing one of the oldest bridges crossing the Danube, the Old Town Hall and other architectural highlights of this UNESCO World Heritage-Listed medieval center. Meals: B, L, D

Traditional Bavarian Band onboard
Day 9  Nuremburg – Prague, Czech Republic
After breakfast, disembark the ship and enjoy a guided tour of Nuremberg. Learn the importance of this city during the war and pass the courthouse where the Nazi War Trials were held. During the walking tour, discover the medieval charm of the Altstadt (old town) with its amazing architecture, fortifications and stone towers from past centuries. Free time is provided for lunch on your own prior to departing by coach for Prague, Czech Republic. Meal: B
Day 10  Prague
The day begins with an included tour highlighting the famous sites of this beautiful city including Old Town Square with its astronomical clock and the medieval Charles Bridge. Following a brief panoramic tour, the heart of the city is discovered on foot. During free time this afternoon, continue exploring on your own or join the optional excursion to Terezin Concentration Camp. Meal: B

Terezin Concentration Camp (additional expense)
Day 11  Prague / USA
Bid a fond farewell to Europe as you transfer to the airport and return home with wonderful memories of life enriching experiences from your cruise along the Danube River. Meal: B 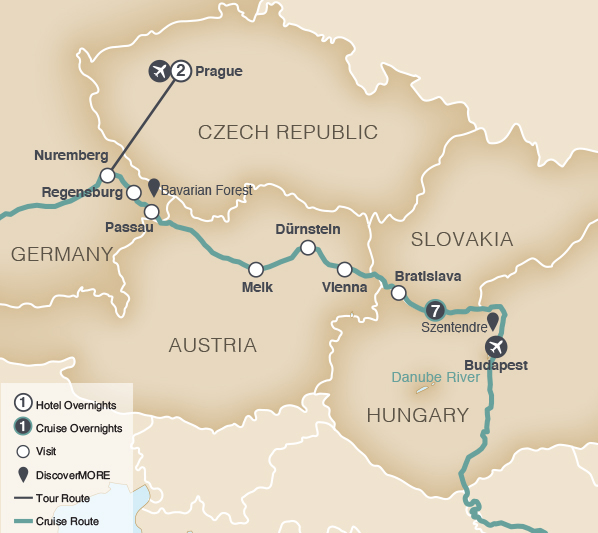 Dates and Rates
*Departs Prague-Budapest Passports and Visas: Each U.S. citizen must have a valid passport. Expiry date of passports should be at least 6 months after the return date of tour. If you don’t have a passport, call our office and we’ll tell you how to apply for one. Some countries require visas for entry by U.S. citizens. We will send visa applications and instructions if a visa is required for your tour. Holders of non-U.S. passports should contact their nearest consulate and inquire about the necessary passport or visa documentation required for entry into the countries visited.