Enjoy two panoramic city tours of London and Paris, an excursion to Leeds Castle and the Cliffs of Dover and learn about life in a château at Château de Vaux-le-Vicomte. Visit the regal Palace of Versailles on this 9 day tour of London and Paris.

Itinerary
Day 1  Depart the USA
Depart the USA on your overnight flight to London, England.
Day 2  London, England
Welcome to England! Upon arrival at London’s Heathrow Airport, you’ll be met by a representative of Mayflower Cruises & Tours and transferred to your hotel. The remainder of the day is at leisure for you to become acquainted with your new surroundings.

This evening, join your traveling companions for an included dinner, hosted by your Tour Manager. Meal: D
Day 3  London
Begin the day with a panoramic orientation tour of London. Your local guide brings history to life as you depart by coach to see the historical sites and architectural wonders throughout the city.

Monuments abound from the Marble Arch to the Nelson Column in Trafalgar Square. Intricate façades decorate Westminster Abbey and the Houses of Parliament. Big Ben and the postcard-perfect Tower Bridge stand guard over the Thames River. The Victoria Memorial is showcased in front of Buckingham Palace. In contrast, the London Eye and the Shard are contemporary highlights to the skyline. The afternoon is free to explore on your own. Meal: B
Day 4  Leeds Castle & Dover
Depart on a full-day excursion with your local guide for a visit to the 900-year-old Leeds Castle. Located in a picturesque countryside setting, and still surrounded by a moat, it has been called the ‘loveliest castle in the world’.

Originally built as a Norman stronghold, the castle has evolved into one of the most visited historic buildings in Britain. From its military beginnings to uses as a palace by Henry VIII, private residence by royalty and political agendas, the local guide will tell tales of the history held within its walls.

After visiting the castle, continue by coach to the Eastern coast to witness the majestic ‘White Cliffs of Dover’. Known around the world for their place in history, as well as scenic beauty, they are considered England’s most spectacular natural phenomenon. Return to the hotel for an evening at leisure. Meal: B
Day 5  London
Enjoy a full day at leisure to pursue independent interests or join the optional excursion to Windsor Castle. Perhaps you’ll choose to visit the Tower of London, explore local markets, visit some museums, take a ride on the London Eye, shop for souvenirs, see a show at one of the theatres, or relax at a local pub. Your Tour Manager will be available to assist with your plans. Meal: B
Day 6  London, England – Paris, France
It’s time to say ‘cheerio’ to London as you depart for the station where it’s ‘all aboard’ the Eurostar. Sit back and relax during this high-speed train ride under the English Channel via the ‘Chunnel’ to Paris, France. Upon arrival in the ‘City of Light’, your coach will be waiting to take you on an orientation tour.

Your local guide will provide commentary as you drive along the Champs-Élysées and see other famous sites such as the Arc de Triomphe, Place de la Bastille, Opera Garnier, Place Vendôme, Les Invalides, the Latin Quarter, the Louvre and Place de la Concorde. Enjoy a photo stop at the iconic Eiffel Tower. The tour ends at the hotel for check in and an evening at leisure. Meal: B
Day 7  Paris
Discover what it was like to live in a castle during today’s visit to Château de Vaux-le-Vicomte. The guided tour through this privately owned château will highlight the period furnishings, beautiful paintings, tapestries and household items used in daily life.

After the tour, attend a private workshop on ‘French Etiquette... the Art of Receiving.’ Learn how the staff was trained to properly greet guests, how seating plans were created for dinners at the château, the art of setting a formal table, appropriate manners, dress code and more.

Before departing, enjoy an included lunch at the château. Upon returning to the hotel, the rest of the day is left free of planned activities. This evening, sample world-renowned entertainment on an optional excursion to Le Lido – famous for its cabaret and burlesque acts. Meals: B, L
Day 8  Paris
Today’s included excursion begins with a journey by coach with a local guide to the opulent 17th-century Palace of Versailles. While visiting the palace, discover the former royal residence restored to its original grandeur.

See the sleeping quarters of France’s kings and queens, the rooms where elegant soirees were held, and the famous ‘Hall of Mirrors’ where the Treaty of Versailles was signed in 1919. After the excursion, return to the hotel for the remainder of the day and the final evening at leisure. Meal: B
Day 9  Paris / USA
Having visited two historic yet cosmopolitan capital cities, bid ‘au revoir’ to Paris as you depart on the transfer to Charles de Gaulle Airport for your flight home. Meal: B 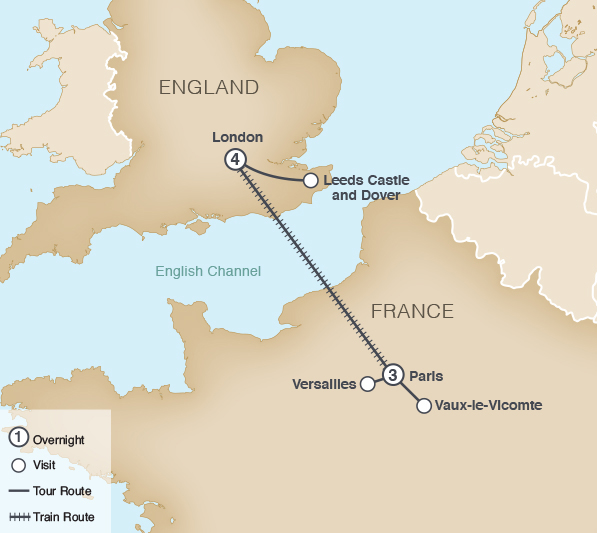